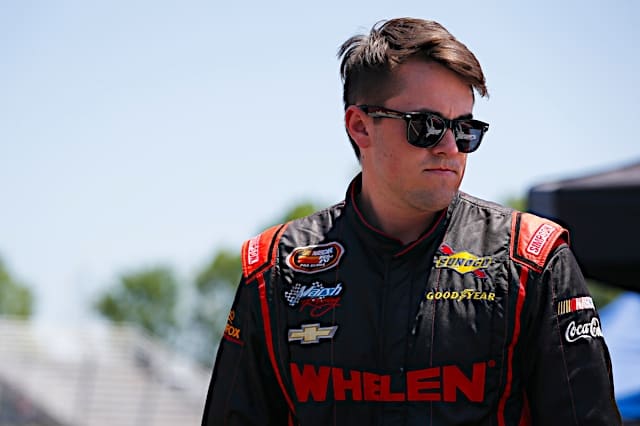 After Hailie Deegan topped the first practice session of the season for the ARCA Menards Series, it was Connor Hall in a Chad Bryant Racing Ford that again led the speed charts in a Fusion, this time in happy hour.

A number of the heavy hitters in the ARCA field took little or no track time in Happy Hour practice. The Venturini Motorsports entries opted to skip final practice after placing all three of its cars in the top 10 during the first session; VMS has won the last two ARCA races at Daytona. 2018 Daytona winner and defending series runner-up Michael Self was pleased with the drivability of his Toyota from the first run on Friday.

Deegan, who topped session one, made only one lap during Happy Hour and never got up to full speed.

A number of drivers took the opportunity to practice pit road entry and exit during Happy Hour. No one was more frequently seen doing this than David Gravel, the World of Outlaws convert.

Though there were no incidents in the session, there was a close call about 20 minutes in. Corr, Van Wieringen and Jason Kitzmiller went three-wide from the tri-oval all the way through the exit of turn 1 during practice, using every square inch of the racetrack in doing so. The pack broke up without contact from the pit road vantage point, though there was little drafting seen anywhere in the field after that episode.

There was also drama late in the session involving Chuck Buchanan Jr. With ARCA rules requiring cars to complete a lap in practice to be presented for qualifying, as many as nine team members were seen sprinting with the car up and down the garage trying to get the No. 87 to fire. It finally did with less than five minutes left in the session.

We stand corrected. Chuck Buchanan Jr.'s No. 87 has fired and is headed trackside @DISupdates #arca pic.twitter.com/qMVZiP3Frz

27 cars took to the track during the Happy Hour session. All 33 cars on the entry list are expected to attempt group qualifying tomorrow at 12:30 p.m. The qualifying session will not be televised; follow Frontstretch on Twitter, as we will be bringing live updates from pit road throughout the session.