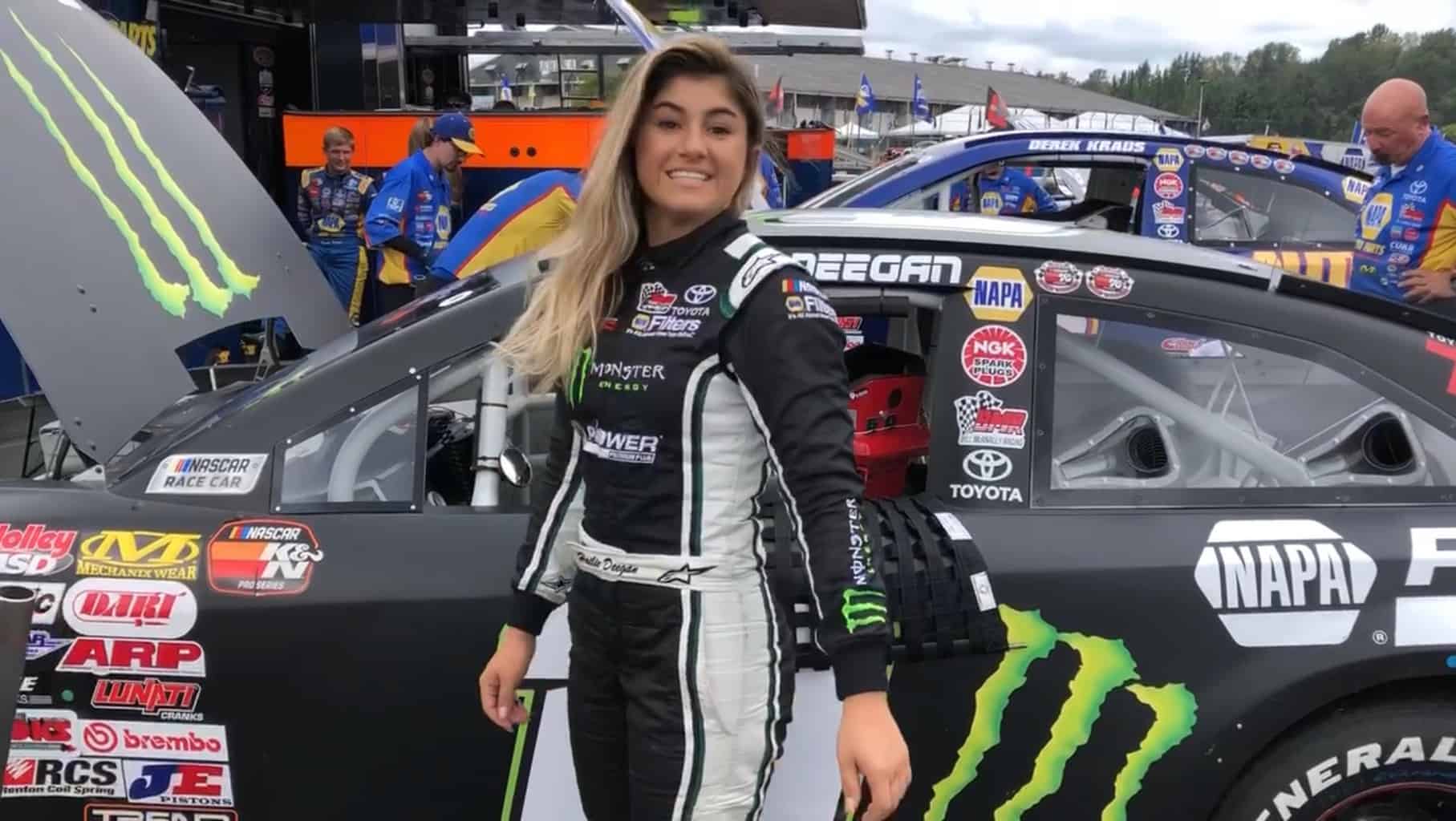 The off-season can be a time of rest and relaxation for most drivers. Some time in warm weather climates, disconnecting from the real world, just living life one day at a time.

Hailie Deegan’s off-season was the exact opposite.

It’s been a busy, yet exciting one for the 18-year-old from Temecula, California. Not only was she announced as the newest development driver for Ford Performance and DGR-Crosley, but she turned her first laps at The World Center of Racing, making her IMSA debut.

Well its true! Couldn’t be more excited to be a part of the @fordperformance family. Gonna be racing a full season of ARCA for @DGR_Crosley and some @IMSA racing in 2020 as of now ? pic.twitter.com/wGgbmugRzo

“It’s been so much fun,” Deegan said of the last few months leading up to Daytona. “This is exactly what I love to do and have fun with. It’s been a training process, trying to be the best that I can as possible, trying to get as much seat time as I can, trying to learn as much as possible.”

This conversation first appeared on the Victory Lane Podcast

Her new Ford teammate Chase Briscoe is among the many supportive individuals she found herself surrounded by when overwhelmed upon getting behind the wheel of the Ford Mustang in preparation for the BMW Endurance Challenge. She had never raced with ABS, paddle shifters or the lack of a spotter, it was all new to her.

But Briscoe knew what she needed and helped her digest the plethora of data available to her in a clear, succinct way.

“The IMSA racing has helped me a ton,” she said. “I did the ROAR test and I felt like in those three days, my road course skills have gotten so much better. (With no spotter) being able to do those things by yourself—you’re the one initiating everything.”

When she was weighing her options in the off-season, IMSA racing didn’t even cross her mind. But when Ford approached her with the opportunity, she didn’t think twice.

She cited seeing the prowess of Briscoe, Cole Custer and Austin Cindric on road courses in the national series, thanks to development in IMSA as a Ford driver. Any edge to gain or skill to learn, she’s all in.

“It’s hard to stand out in the NASCAR world,” she said. “I saw how much of a better driver it made me, what different skill sets it gave me. Different tools in my tool chest. Being able to do that and given the opportunity to do that, it’s just going to help me a ton.”

Deegan cited the focus Ford is able to pay to her as a main factor for leaving Toyota. She also didn’t want to rise to stardom too quickly and flame out, as has happened to multiple young prospects before.

“I feel like people are getting a little ahead of themselves in a sense, where they expect more out of me than what I’ve learned,” she said. “I’m racing ARCA. I’m not racing Cup—I don’t know all these things that these amazing drivers at these high levels know. I’m still learning, I’m still at the kind of bottom of the food chain when it comes to that.”

Learning every day and not being afraid to make mistakes comes from a lifetime of racing. It’s something that’s been instilled in her from her father, Brian Deegan, that she’s seen play a real factor in her development already.

“Yeah, I’m going to make mistakes, my driving isn’t perfect. But I’m here to learn, and I’m driving in the series because I need to learn so I can eventually can move onto those higher levels.”

Deegan and the word shy are anonymous. She’s never felt the need to hide the fact that attention being paid to her on and off the track is a big factor for her long-term.

Toyota wasn’t willing to meet her expectations. So she took her talents elsewhere.

“When it comes down to it, everything I do is for my career and to give myself the best future possible,” she said. “I know it’s going to be a long road and I know I want people behind me that are going to be there for the long run. In reality, I need long-term deals, long-term commitment, because I’m making a long-term life commitment over here and I need somebody willing to make the same commitment with me.”

“Every manufacturer has their own way of doing things. Being over at Ford, they have a different perspective than a lot of the other manufacturers. It’s a lot of focus. That’s what I like. Everybody’s super involved, from the higher people, everyone comes to the races, watches you race, supports you, constantly trying to help.”

An area she could use some help in is sponsorship, like most drivers in the sport nowadays. But Deegan wanted to dispel the narrative that she has unlimited funding because of her popularity.

“I’m on the side of being funded by sponsors 110%,” she said. “I have to race and win to get sponsors and that’s what covers my racing. On that note, it helps when you get that focus and attention. Sponsors want drivers who are in the spotlight.”

She understands that being a female racecar driver comes with certainties such as more attention being paid, as well as more scrutiny.

“People almost try to separate me because I’m a girl, or I have followers, whatever it is,” she said. “It’s never gonna be easy, it’s always a challenge, it’s always something you’re working for, constantly making phone calls.”

She routinely seeks out companies on social media and does the grunt work herself.

“I sit on my phone, and people are like ‘oh my God, she’s doing Instagram stories and stuff.’ And yeah I am. But I’m sending sponsorship proposals every single day to new businesses.”

She’s done it enough to find out the hard way that Instagram limits the amount of direct messages a user can send each day. She sometimes even has her mother, Marissa, copy and paste an elevator pitch of sorts to companies while she’s racing.

But she also has found thanks to her popularity and blue check mark, more companies are responding and have been receptive to the idea.

“I’m sliding in so many companies DMs over here,” she chuckled.

She’s previously outlined her “dream” scenario of moving up the ladder, which she said her and her father talk about regularly:

The “take it slow” mindset is one that hasn’t been followed in recent years with young drivers. William Byron’s rapid ascension to Cup, along with Chase Elliott, Ryan Blaney, Cole Custer, etc. Even Casey Atwood back in the day.

That’s not to say those aforementioned drivers did it the wrong way. But Deegan has a way she wants to go about things. Her main goal is to not move somewhere unless she’s ready, set realistic, achievable goals and accomplish as many of them as possible before moving on.

“I know that if you can’t really do good at the level you’re at and you move up, it’s going to be a hard challenge,” she said. “You see all these drivers and new kids come up, they expect your first time racing trucks to be out there battling Matt Crafton and Johnny Sauter, but those guys have been there for so long and have so much knowledge of it. You have to make sure you have enough skills and knowledge to go there and be competitive off the bat.”

So what does success look like for her this season? She revealed what her famed goals on the notes app for 2020 are:

She emphasized bonding with her DGR-Crosley team and learning the ins and outs of which adjustments make the car do what. Having run one race for them last year at Bristol Motor Speedway, there’s a baseline that Deegan feels has been established.

“When you’re closer with your crew guys, it makes the process so much easier.”

“This is a really critical year in my development before we kind of move on to the (national) series, and I know this is where I’m going to be learning a ton,” she said. “I’m surrounded by a ton of great people, a ton of supportive people.”

The next chapter of her journey begins this weekend on the 2.5-mile high banks.

“If there’s any race I want to win, it’s Daytona.”

This is NOT the next Janet Guthrie. Not even close.

She seems to have a good plan and is being very realistic in her approach. Good for her. She did a very good job yesterday and the incident with the ?? was a racing deal as she went outside and his car came back up some and hooked last 3 inches of right rear fender and first 3 inches of her left front.
Ms. Deegan should do well and just may be the real deal as a driver if things go her way.
Might not be Janet Guthrie but likely also not Danica Patrick.
Hope she and the other two women that ran yesterday do well for their seasons.

I have no idea how an inexperienced 18 year old gets the chance and the mega dollars to run Daytona. The “sport” of auto racing in my opinion is a joke.

Easy answer….Diversity is the reason “how an inexperienced 18 year old gets the chance and the mega dollars to run Daytona.”

I like her a lot. She brings a lot of excitement and enthusiasm to the sport. Plus, she has skills. You guys can say she isn’t Janet Guhtrie. and I agree, but give her some time to at least try and prove herself . She’s been competitive in every series she has raced in so far. As far as the 18 year old comments are concerned, that’s EVERY sport. Youth is a reality no matter what sport you turn to. I see Hailee Deegan as a potential bright spot and a reason to stay interested in NASCAR. Just my opinion…..