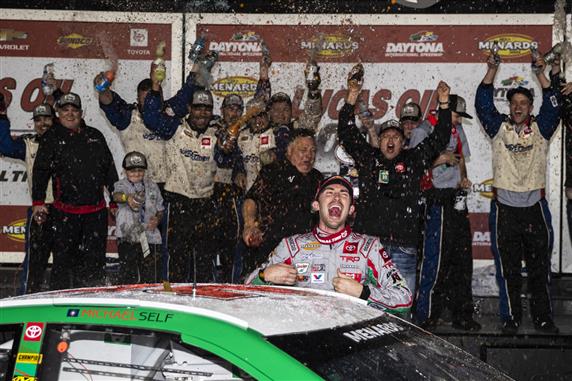 Michael Self took home his second career victory at Daytona International Speedway in the Lucas Oil 200 driven by General Tire on Saturday (Feb. 8).

The No. 25 car of Venturini Motorsports avoided the major incidents and led the majority of the laps en route to the win.

Self, who began the race on the pole, talked to FOX Sports in victory lane.

“Oh man, to start this year off like this, technically to go back to back with (crew chief) Kevin Reed here at Daytona, you know this is unbelievable. Just to come and to feel like this is our year of redemption, and to be back with Sinclair and Venturini here. It feels so good to start the year off like this, and just such a great day overall. Just can’t give enough credit to all these guys right here – this guy right here, billy, big bill, Kevin – what an amazing car. I mean to have our cars finish one and three, it’s just unbelievable.”

FOX also asked Self about how important it is to have a stable car at a track like Daytona.

“It’s huge. I tell a lot of the younger guys that come here that’s, frankly sometimes that’s more important than speed here. Especially when we got back to seventh or eighth place, we were back a little bit in the draft a couple times. There’s a lot of bump drafting going on and you gotta be able to hang on in that situation. So having a car that’s stable, that you can handle — whether you’re out front or in the draft — that’s what ends you here in victory lane. I’m two for two here in this car here at Daytona, so that’s pretty cool; it’s a good car.”

The first caution of the day came on the opening lap when the No. 02 of Andy Seuss tried to slot in front of David Gravel’s No. 28 and got clipped. He slid across the grass in turn 3 and came back across the racetrack at a high rate of speed. Eric Caudell and Scott Reeves got together trying to avoid him.

? Andy Seuss goes off road on the backstretch. ?

Then a couple cars brought out separate cautions when their engines let go. On lap 12, Jason Kitzmiller started smoking badly. Lap 18 saw Brad Smith suffer the same issue and spin. He avoided contact from other competitors and the wall. While under that caution, Dollar was penalized when his gas can left the pit box.

Tanner Gray led on the restart, but jumped outside the line and Corr took the lead on lap 33. However, Corr attempted to block both lanes and got caught in the middle. Holmes took over the lead just before the Big One on lap 39.

The first BIG ONE of Speedweeks.

What a job by #XfinitySeries driver @rileyherbst to get through that in the 18. #ARCA pic.twitter.com/5F4pyboyin

While the pack was trying to go around a lapped car, J.J. Pack moved down where Natalie Decker and Connor Hall were. Decker and Hall made contact and then chaos ensued. Decker, Jacob Heafner and Dave Mader III among several others suffered damage. This brought out the red flag around the halfway point.

Later, on lap 50 Deegan bump drafted with Chuck Hiers while in a pack. Unfortunately, Hiers got off-center and Deegan bumped him off his right rear corner. Hiers took a hard right and hit the outside wall head-on. He was ok, but needed a moment to catch his breath.

? Chuck Hiers goes around off the nose of Hailie Deegan on the backstretch ?#LucasOil200 | @DISUpdates pic.twitter.com/Ecfsg9Jurs

The race stayed green for a few laps, but with about 10 laps to go Gray was black-flagged due to excessive smoke. A hole in the oil cooler ended his day; he finished 16th.

The caution came out on that same lap due to a bunch of debris strewn on the racetrack from Gravel’s damaged car; the right-side door was missing. They were able to make necessary repairs so he could finish the race, though he was a lap down and out of contention.

The next race on the schedule for the ARCA Menards Series takes place at Phoenix Raceway on March 6.