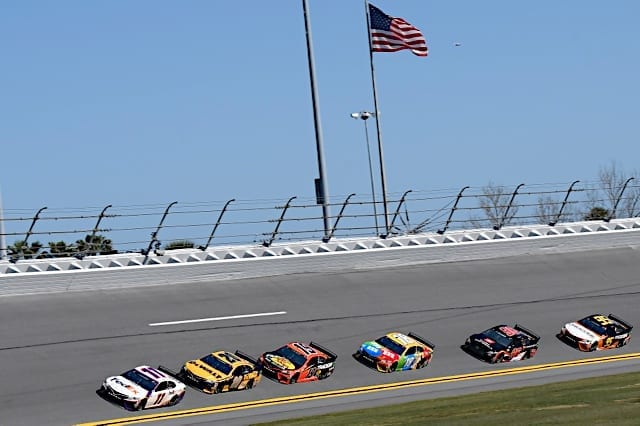 Though the speed charts will show the Chevrolets of Ty Dillon and Bubba Wallace atop the two Daytona 500 practice sessions Saturday, the storylines were elsewhere in the Cup garage. Taking a page from the aggressive display of drafting put on by the Ford camp in Busch Clash qualifying, all six Toyota teams took to the draft in first practice, and were lightning fast doing it. The JGR Toyotas, alongside Christopher Bell and Daniel Suarez, raced in a pack, with Denny Hamlin going so far as to bump Suarez through several corners. When first practice was over, the six Toyotas were among 13 cars that topped 200 mph during the first session. Not to be outdone, the Fords staged a drafting pack of their own later in the going, though they were unable to match the speed of the Toyotas.

The headline of the second session came early courtesy of Brad Keselowski, who failed to complete a single lap of practice after colliding with a fence pole exiting the garage, causing heavy damage to the passenger side of his Mustang:

Keselowski and crew were still feverishly working on repairing the car even as the practice session ended, though as of that time there had been no movement at the No. 2 crew’s hauler indicating that a backup car would be prepared.

Meanwhile, as the second practice progressed, Hendrick Motorsports emerged as the unsurprising pole favorite. With single-car runs on many team’s agendas for the second session, spots 4-7 on the speed charts were occupied by Hendrick Chevrolets… while positions 1-3 were aided by draft help. Alex Bowman was fastest in the Hendrick camp, followed by Jimmie Johnson, the current odds-on favorite to win the pole on Sunday.

Clint Bowyer‘s team was animated on the radios all day, especially taken by the high speeds and closing rates the Cup cars put on display in both sessions. With the second practice ending, the No. 14 team closed with a radio transmission stating “it’s going to get crazy. Rest up.”

Shocker…. Toyota’s are fast. Reminds me of last year. Isn’t this season supposed to just be a repeat of last season?

Hendrick cars are fast by themselves. Jimmie J gets the pole (nudge, nudge, wink, wink). Hendrick cars disappear behind the Toy (Baby Busch) when it matters.

Well there is one prediction that was wrong. I would have bet a few dollars that Johnson would get the pole.

You missed one Don… There will be at least one BIG ONE and probably a GWC finish.