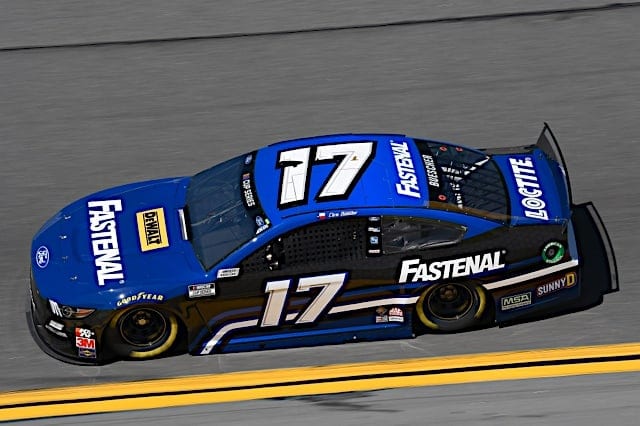 The introduction of Ryan Newman to the Roush Fenway Racing stable in 2019 resulted in a major step forward for the organization. Bringing 2015 NASCAR Xfinity Series champion Chris Buescher back to Roush is the next step in that climb, and he’s embracing a return into the fold.

Buescher spoke to Frontstretch on Sunday (Feb. 9) in the midst of qualifying for the season opener at Daytona International Speedway. He said there was a positive energy in the shop that was evident from the second he walked in the door.

“It’s definitely neat to see everybody get rallied behind the organization and try[ing] to get it back to what it once was,” Buescher explained. “[I’m] trying to be a part of that, [to] be a part of the positivity around the shop, and to hit the ground running during this season.”

Being a former RFR driver, Buescher knows his way around the organization. But he’s also cognizant of how big a role his new teammate, the veteran Newman, played in putting Roush on the upswing it’s riding into 2020. When it comes to the mantra of unity Newman has been preaching in the offseason, Buescher has bought into that philosophy.

“The smaller groups, with only two cars, you’ve gotta work really well together to raise the bar,” he said. “That rising tide raises all ships thing is true.

“You can’t have that internal fight to battle each other. You’ve got 38 other cars you need to worry abut every week.”

That teamwork has been manifested in tangible ways as well. Buescher and Newman went out to lunch several times in the offseason, building a personal bond as well as meeting in the team shop. Buescher’s No. 17 team was also planning to watch the Clash, fully expecting to utilize the notes Newman’s No. 6 group gathered from running the exhibition.

While Buescher has clarity in the direction he and his teammate are taking the Roush organization, the same can’t be said for Daytona Speedweeks. In that regard, the jury is still out. When asked if his new Ford Mustangs drafted any different from the Chevrolets he’s wheeled the past two seasons, Buescher wasn’t ready to make a statement.

“[With] the smaller groups in practice [that] aren’t really being aggressive, it’s kind of a tame draft,” said Buescher of his experience thus far. He didn’t expect to learn of any such differences until getting into Thursday’s Duel races.

Perhaps most importantly, Buescher is hoping to get his surroundings a bit straighter by Thursday night. Like so many race fans and spotters around him, he’s still trying to make sense of all the new faces, numbers and schemes the 2020 season has brought.

“I can’t keep up with who’s in what right now,” said Buescher of the Cup field. “The little bit of drafting we did, I had no clue who was around me or who was merging in the draft. I don’t know. Even the car numbers, even if you know that the colors have changed.

“I’m spun out with who’s in what car. That’s going to be tough coming in next week.”

Fortunately for Buescher, there will be a familiar number starting directly in front of him when Duel race No. 1 goes green: Newman.