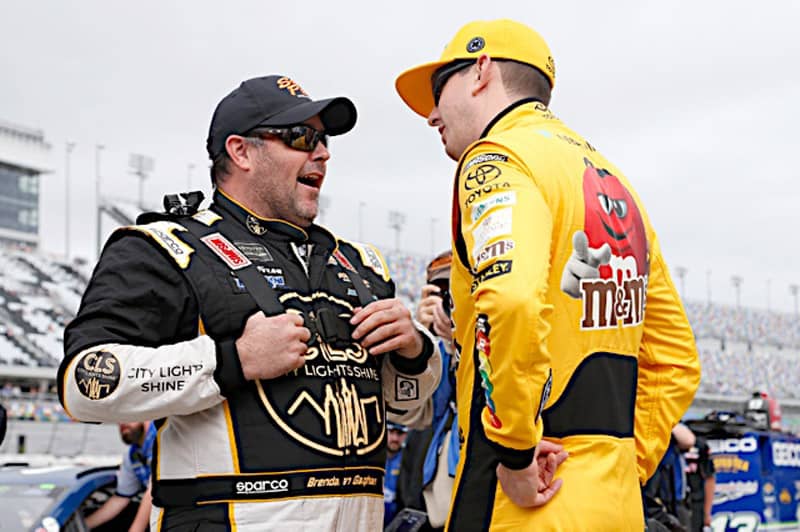 Two drivers can breathe a huge sigh of relief while five others will have sleepless nights leading into Thursday.

“It’s so awesome,” Haley told FOX Sports. “It’s what we came to do, Matt Kaulig had a dream to run the Daytona 500 and we’ve locked ourselves into the show which is what we came down here to do but not only that, we’re the fastest open car which is kind of like an awesome stamp to put on qualifying. Just really thankful for Fraternal Order of Eagles and everyone at Kaulig Racing, ECR Motors, and Chris Rice for believing in me. He called me into his office and told me he wanted me to run the Daytona 500. Truly a blessing, hopefully, we can go 2-for-2 here at Daytona but if not it’s just awesome to get Matt Kaulig his first NASCAR Cup Series start.”

As noted above, Gaughan will race in his final Daytona 500 on Sunday.

“I didn’t mean to sweat that much,” Gaughan told FOX Sports. “We lost a half-second from yesterday, Michael [Waltrip], I don’t know what we did but the ECR motor pulled us through and Darren Shaw he was sweatin’ it through with me and the Beard family. Mr. Beard is sitting up in Michigan right now, he didn’t come down today. “Mr. Beard, you can breathe again,” we made it, we’re locked in, and so I can go dive now, I’m happy I can relax!”

Meanwhile, the destinies of Reed Sorenson and Timmy Hill lie in the hands of the two drivers listed above. Below are the scenarios for each driver to race his way into one of those final two positions available.

The Bluegreen Vacations Duels at Daytona kick off at 7 p.m. ET on FS1 and can be listened to via MRN and SiriusXM NASCAR Channel 90. – Christian Koelle

ARCA: The One That Got Away Came Back To Michael Self

Early in the 2019 edition of the Lucas Oil 200, Michael Self and Willie Mullins got into it. Self started sixth last season and was looking to make it two straight victories at Daytona, but the incident with Mullins ended his bid for that victory. As the season progressed, Self was able to put that loss behind him and go on to win five races during the 2019 season. It would’ve been a championship victory had it not been for Christian Eckes.

Not only did he win the race on Saturday, he dominated from the pole and Self made a capital statement that you’ll have to go through him if you want to win the ARCA championship.

The first race with drivers from both the ARCA Menards Series and the old K&N Pro Series, an “ARCA guy” came out on top but he was almost taken off his pedestal by a “K&N” girl.

Hailie Deegan came very close to earning her first ARCA Menards Series victory entering territories that have never seen a woman before. Before her, Sarah Cornett-Ching, Milka Duno, Leilani Munter, and many others paved the road that has led to what Deegan was able to accomplish Saturday. Much like Self, she made a statement and it could be interesting to see a Deegan vs. Self battle for the championship but that’ll have to wait a whole month.

The ARCA Menards Series returns to action on March 6 at Phoenix Raceway as the series ventures out to unchartered territory, but you don’t have to wait until then for ARCA Racing. The ARCA Menards Series East kicks off its season Monday night with the Skips Western Outfitters 175 at New Smyrna Speedway. You can catch the season opener live on NBC Sports’ TrackPass at 7:30 p.m. ET.  The race will air via tape delay Friday, Feb. 14 at 1 p.m. ET on  NBCSN. – Christian Koelle

With the Rolex 24 at Daytona and the Liqui-Moly Bathurst 12 Hour complete, sports car racing is in a bit of a lull right now.  All of the major series were off last weekend.

Some IMSA regulars sat down and watched Sunday’s shenanigans in Daytona, like JDC-Miller MotorSports’ Joao Barbosa.  Barbosa was somewhat surprised at what he saw.

Was this the @NASCAR #BuschClash or the Bush Crash??
I hope they have enough cars for the races ahead!!??
Crazy!! ???

Ryan Eversley headed to his hometown track, Michelin Raceway Road Atlanta, to take part in Saturday’s 14-hour season opener for the ChampCar Endurance Series.  He, along with the other participants, were greeted by temperatures in the 30s and wintry weather.  The race was eventually red-flagged by snow four hours in.

Finally, in SRO America, Marco Polo Motorsports announced Thursday that they will be back full-time in Pirelli GT4 America competition in 2020.  Nicolai Elghanayan, who had to withdraw from the remainder of the season last August due to non-racing related shoulder injury, will race the No. 71 KTM X-Bow GT4 EVO full-time in both the Sprint and Sprint-X classes.

Elghanayan has previously raced in SprintX, but as a solo driver.  That will not be the case in 2020.  For SprintX races, Elghanayan will be joined by Norwegian racer Mads Siljehaug, who is a works driver for Reiter Engineering (Reiter Engineering builds the X-Bow GT4 EVO).  Siljehaug is the defending ADAC GT4 Germany champion and has more than three years’ worth of experience racing the KTM product.  The Pirelli GT4 America season is scheduled to begin at Circuit of the Americas in Texas on March 7. – Phil Allaway