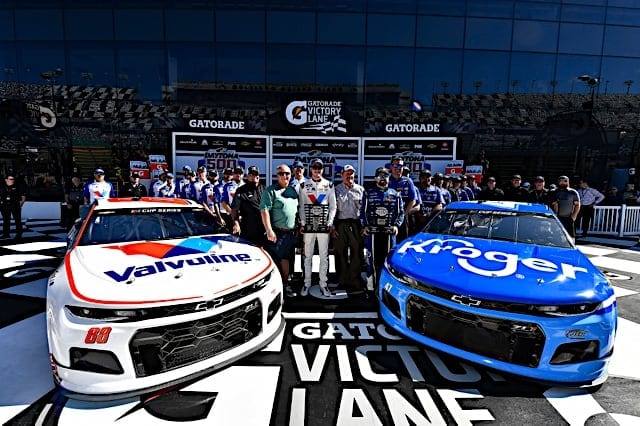 New team for Ricky Stenhouse Jr.? No problem. The former restrictor plate ace continued his strength Sunday (Feb. 9) at Daytona and Talladega while putting his car on the pole for the 2020 Daytona 500.

Stenhouse spent much of the session as much as a half-second faster than the rest of the field before some Hendrick Motorsports drivers challenged him down the stretch. Alex Bowman wound up second-quickest in his No. 88 Valvoline Chevrolet, joining Stenhouse as locked in on next Sunday’s front row. But no one could catch JTG Daugherty Racing’s new hire as Stenhouse earned just the third pole of his Cup career. His speed of 194.582 mph edged Bowman’s 194.363, well short of the track record with NASCAR’s modern superspeedway package.

Stenhouse has never won the Daytona 500 but captured the July race here in 2018. He’s seeking a fresh start at the No. 47 after just one top-five finish last season caused Roush Fenway Racing to wriggle their way out of his contract.

“I know that this is Daytona 500 qualifying,” Stenhouse said afterward. “It’s one lap. It’s one weekend. But I know that they’re putting the same effort into our Las Vegas car that we’re taking to Las Vegas as what they’ve been putting into our 500 car.

“I think this is just signs of things to come, of our speed that we’re going to have with our No. 47 team.”

As for Bowman, he starts on the outside of the front row a second straight year. While the near-miss ended a run of five straight poles for Hendrick Motorsports in the Great American Race, the 2018 pole sitter feels well positioned to make a run at Victory Lane himself.

What else could @AlexBowman88 could have done? "Maybe grow a mullet like Ricky," he says. "Maybe that was the speed secret there." #NASCAR #Daytona500

Two drivers among the seven open cars “locked in” to the 2020 Daytona 500 starting field based on their qualifying speed: Justin Haley and Brendan Gaughan. Gaughan, also running his final Daytona 500, was surprised considering his No. 62 struggled based on what they had seen in practice.

Brendan Gaughan after finding out that he's in the #Daytona500 pic.twitter.com/NsdQiDLf5B

“Never knew when the last one was going to be,” Gaughan said after his qualifying effort. “We made it, we’re here, and we’re going to have a bitchin’ time.”

BJ McLeod was the only driver of 43 entered not to make a qualifying attempt. Martin Truex Jr. (21st), Ryan Blaney (27th) and Austin Dillon (29th) were among those with disappointing runs.

Never mind the pole award. I’ve just been informed that Thursday’s races are not being called the Gatorade Duels, but instead the BlueGreen something – what in the name of Wonderbread is happening to NASCAR sponsorships?????