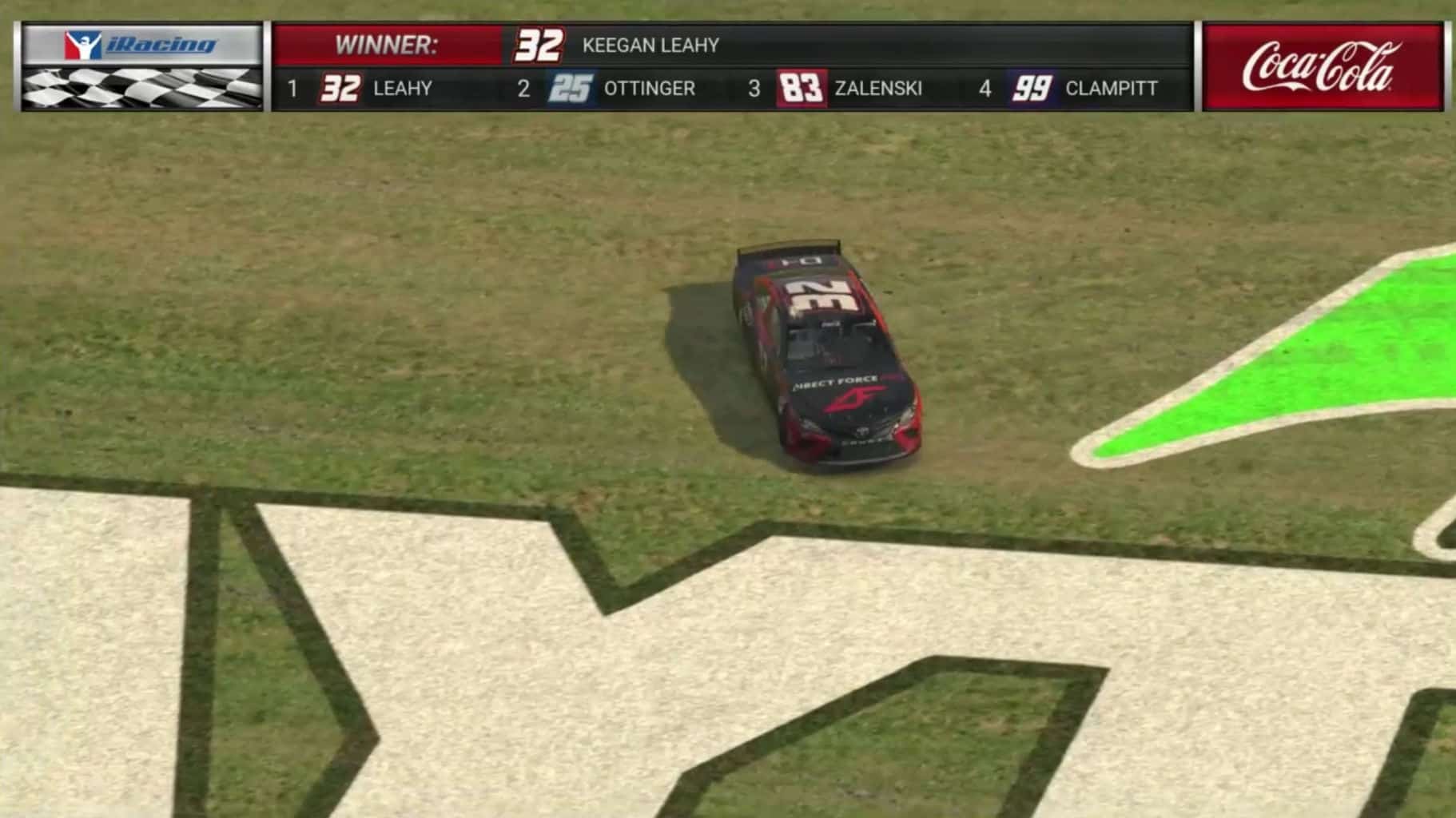 What’s it take to win at Daytona? The formula for victory varies from year to year and series to series, but working well in the draft with others, executing perfect pit strategy and having nerves of steel is always a pretty good combination. For Keegan Leahy of Denny Hamlin Racing, it proved just to ticket to claim the checkered flag for the 2020 eNASCAR Coca-Cola iRacing Series opener.

Leahy emerged at the head of the pack after the field cycled through its final set of pit stops on Tuesday night, then held on and led the inside lane around as lap after lap ticked off. Though there was a chaotic wreck on the final lap, Leahy held a steady wheel and claimed his sixth series win by .005 seconds over Nick Ottinger of William Byron eSports. Polesitter Bobby Zalenski pushed Leahy consistently over the race’s final segment and brought his Virtual Racing School Chevrolet home third.

“That was incredible, I can’t believe we pulled this off,” Leahy said during his post-race interview. “We had a game plan from the start; we short-pitted, got ahead of the pack, just trying to play it safe. We just wanted to be there at the end, and somehow we pulled it off.”

With this year’s Daytona race extended to 100 laps, the biggest difference was that racers would have to come to potentially come to pit road twice under green. That’s exactly what happened when the first 60-plus laps went off without a caution, and Leahy was part of a group of cars that pitted on lap 66. Wood Brothers Gaming’s Chris Overland led most of the remaining racers to the pits on lap 70, cycling Leahy through to the lead by lap 72.

The field ended up separated into two distinct packs of 16 or more cars, but by the time there was 20 to go, the top 34 cars were back in one massive bunch, mostly running three wide. As everyone remained close together, there wasn’t much Leahy could do while leading the inside line with Zalenski behind him except stay on the gas and try not to make any mistakes.

“I’m not sure how calm I was,” Leahy said when asked how he kept his cool. “I’m sure if you had that same heart monitor on that Jimmie Johnson had on during the Clash, I’d be well over what he was showing. I’m still feeling my heart pounding. We just decided to run the bottom.”

In the end, that proved to be enough to take him to victory lane, even as numerous cars bounced off each other and a few ended up going airborne after the final turn. Most of the carnage occurred just as the drivers crossed the start-finish line, so the Big One didn’t cost many cars any finishing positions but did serve up some wild visuals.

IT'S A PHOTO FINISH AT THE LINE! ?@KeeganLeahy takes it by INCHES in the season opener of the eNASCAR Coca-Cola iRacing Series at Daytona! pic.twitter.com/Ehu4hFisRU

Ottinger admitted some dismay about Leahy dipping below the yellow line but said the move was within the rules and pleased with the speed his car showed.

“I’m not happy to lose it by that much and that way, but man, our Logitech G machine was freaking fast,” Ottinger said. “I’m ecstatic, I’m happy for our William Byron eSports team. We had a great showing, we got up to where we needed to be and [fourth-place finisher] Logan [Clampitt] did all he could to help us out there.”

Leahy’s win moved him up to a sixth-place tie for career eNASCAR Coca-Cola iRacing Series, and continued a trend of seeing new faces win at Daytona — 11 different drivers have won at the track since the series began in 2010. Leahy will get a chance to try to make it two in a row at the World Center of Speed when the series returns to Daytona on Aug. 25, but the next race will take place on Feb. 25 with the iRacing drivers tackling Auto Club Speedway.