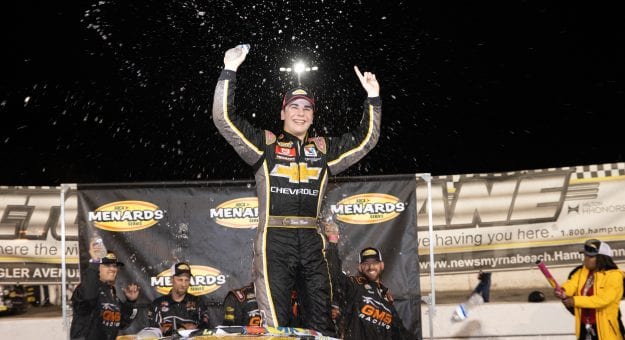 In the first race under the ARCA Menards Series East banner, Mayer made a late-race pass on Ty Gibbs. That pass would prove to be the winning move and Mayer would head to victory lane for the fifth time. Mayer and Gibbs battled hard late but cleanly.

“He (Gibbs) drove me up the race track pretty good there, so I was like ‘I’m not gonna take that,’ so I gave it a little bit back off Turn 2, was able to get to the inside and drive away from there. I think he used his stuff up a little too early which gave us the lead.”

Griffith made a statement during the race, leading a race-high 144 laps, in his debut. After winning the pole, Griffith and Mayer both battled hard throughout the night putting on a show for the large crowd in attendance.

“We started with a blistering pace, and I really didn’t even have to use that car up one bit,” Griffith said in the ARCA recap. “We really, really had an excellent car tonight. That Chad Bryant Racing team worked their butts off these last few days. They got that thing dialed in perfect. I’ve learned so much the past two days.”

Much like the rest of the racing action this weekend, chaos ensued on lap 154 shortly after a restart. Tanner Gray went three-wide with Max McLaughlin and Mason Diaz and the end result was a moment fans in attendance will not soon forget about. The track got narrowed down the frontstretch and Gray went on its side sliding down the frontstretch before coming to a stop just before the start-finish line.

Gray walked away on his own power. The race was red-flagged to give officials an opportunity to repair the catch fencing.

.@tannergray5 is okay after that scary ride on the wall ??

Took blame for putting himself in a precarious position but didn’t mince words about @MaxMcLaughlin_.

The Skip’s Western Outfitters 175 will be broadcast on NBCSN on Friday, Feb. 14 at 1 p.m. ET. The next race on tap for ARCA is the Star Nursery 150 Feb. 20 at the Bullring at Las Vegas Motor Speedway, which will kick off the ARCA Menards Series West season.

The ARCA Menards Series East returns at Five Flags Speedway in Pensacola, Fla. on Saturday, March 14. Mayer will enter that race with a three point lead over Griffith.