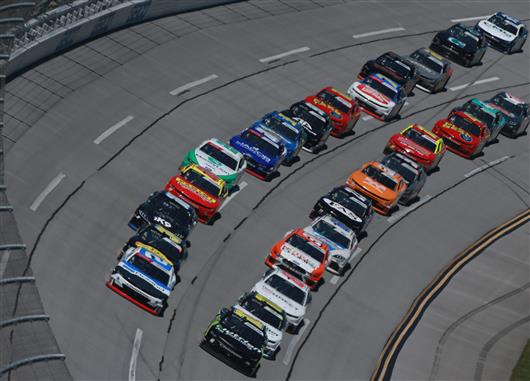 After a three-month hiatus, the NASCAR Xfinity Series returns to the track this weekend at the famed Daytona International Speedway. For many drivers, this is the biggest race of the season, but it won’t give a fair perspective on how the season will shape up.

Last season, Michael Annett won the season opener… in boring fashion.  If you are unable to remember, last year’s race was among the worst in NASCAR history, with a single-file Memorial Day parade for the majority of the event. Don’t expect that this time around.

Also, don’t expect to see the 2019 “Big Three” to run many – if any – races in 2020. Tyler Reddick, Cole Custer and Christopher Bell all made the leap to the Cup Series, where they’ll run for Rookie of the Year. That means that this season’s championship is wide open, as those drivers combined to win 21 races last year.

Though the Big Three contributed much success to the series, two of its cars will not return in 2020, which is a disappointment. Both Richard Childress Racing and Stewart-Haas Racing have downsized to one car for 2020.

In addition to the Big Three, John Hunter Nemechek has also ventured to the Cup Series with Front Row Motorsports, as GMS Racing shut down its Xfinity operations following Homestead.

To make all the changes easier, let’s take it team-by-team.

With Reddick moving to Cup, the No. 2 car is no more, and RCR will be a one-car operation. That comes just three years after team owner Richard Childress ran five full-time entries in Xfinity.

Myatt Snider and Anthony Alfredo will move up from the Gander RV & Outdoors and split the bulk of the schedule in the team’s No. 21 Chevrolet. Meanwhile, Kaz Grala is returning for what is believed to be six races.

With Custer moving to the premier series, Stewart-Haas Racing is putting all of its focus on Chase Briscoe, who finished fifth in points during his rookie season. Despite only winning once in 2019, the No. 98 team will likely find itself competing for the title come early November.

After dominating the second decade of the century, Joe Gibbs Racing hit the reset button for 2020, as Brandon Jones is the only returning driver in its Xfinity lineup. With Bell moving to Cup, the team added Harrison Burton, who had an average finish of 16.8 in nine races last season, and Riley Herbst to drive the coveted No. 18 Toyota. The team will also run a part-time fourth car for Cup drivers with a number TBD.

This team is a fresh new driver lineup with a lot to prove in 2020.

Last year was one of change at JR Motorsports. For them, 2020 will look awfully similar to 2019 as Justin Allgaier, Michael Annett and Noah Gragson run for the championship.

The only change is with the No. 8 car. Dale Earnhardt Jr. will run Homestead and Jeb Burton will run 11 races, but the team added 2019 Cup Rookie of the Year Daniel Hemric for 21 races to chase after the owner’s championship. Crew chief Taylor Moyer should be relieved only having to work with three drivers this season, when in his rookie year as a crew chief he worked with nine.

There are no expected changes for Team Penske as Austin Cindric is returning to the No. 22 for the full season. It’s likely Cup drivers Brad Keselowski, Joey Logano, Ryan Blaney and Matt DiBenedetto will run a few races each.

The 2019 season was a year of growth for Kaulig Racing, but expectations are much higher in 2020. Not only will Justin Haley return for a second season, but the team grabbed Ross Chastain to run full-time in the No. 10 car.

AJ Allmendinger is also set for eight races in the No. 16 Chevrolet.

Last year was RSS Racing’s best season to date, with Ryan Sieg posting a career-best 12 top-10 finishes. He will return to the No. 39 car as the team’s primary driver.

The team will only run two full-time cars with Myatt Snider and CJ McLaughlin sharing the No. 93 car. Jeff Green is slated to run the three superspeedway races before being the lead crew chief of the No. 93 ride.

Ray Black Jr. had his best season to date in 2019, and will return to the No. 07 in 2020. Meanwhile, Gray Gaulding, who was the first driver to miss the playoffs last year, could not find enough funding to secure the No. 08 car. Instead, Joe Graf Jr. will drive it full-time.

Jeremy Clements was another driver that had his best season on paper last season, minus a win. Not much has changed over the offseason, though the driver believes the team is much more prepared than it was heading into 2019.

JD Motorsports holds the title for most changes from the end of 2019 to the beginning of 2020.

The team has added David Starr and Jesse Little to run two of its full-time entries. Meanwhile, BJ McLeod is returning to the team, Jeffrey Earnhardt has come back to the team for a handful of races and Colby Howard is slated for 20 races.

Not many changes with this second-year team, though Brandon Brown will switch to No. 68. Brown is hoping the team can put two cars on the track at some point during the season.

The only changes at DGM over the offseason were numbers. Josh Williams will switch from No. 36 to No. 92 for his second full season with the team. Alex Labbe will pilot the No. 36, which looks to be a part-time car. Meanwhile, Ceaser Bacarella, Ronnie Bassett Jr. and Dillon Bassett are all lined up for the No. 90 car.

Both Matt Mills and Vinnie Miller are returning for a second full season with the team. Mason Massey and Josh Bilicki are scheduled to make up the majority of the season in the No. 99 car.

Last season, MBM ran four full-time teams. This year, the plan is to downsize to two full-time teams with Timmy Hill and Chad Finchum as its primary drivers. Stephen Leicht has joined the team for at least six full races, though believes some start-and-parks will come in the season.

It’s also believed Hattori Racing Enterprises and MBM will increase its working relationship from 2019, starting at Daytona with Austin Hill.

Early in the offseason, David Starr was “95% sure” he’d be returning to the team. However, Means elected to go a different route and signed on JJ Yeley for the first three races of the season. Why three races? Because the team has reportedly signed Kody Vanderwal for the majority of the season. Who is Vanderwal, you ask? A 19-year-old driver, who has two victories in what was the K&N West Series in 35 starts.

It may have gone unnoticed, but Mike Harmon Racing had a drastic increase in performance last season. The driver lineup for 2020 is expected to look similar, with many drivers splitting time in the seat in one of its two full-time entry’s. These drivers include: Mike Harmon, Joe Nemechek, Tyler Matthews, Kyle Weatherman, Camden Murphy, among others.

Last November at Homestead, team owner Morgan Shepherd confirmed the team was in discussion with two different sponsors for the 2020 season, in hope of running Landon Cassill full-time.

Since, Shepherd has confirmed that the plan is to run every race but this weekend’s season opener at Daytona.

Chric Cockrum is set to run the three superspeedway races in the No. 25 Chevrolet. In 2019, he recorded his first two career top-20 finishes, including 10th at Talladega Superspeedway.

Team owner Sam Hunt and driver Colin Garrett have teamed up to form the No. 26 Toyota. The plan is to run a handful of races or so, though the team is relying on crowdfunding.

The team raised enough funds to race at Daytona, as well as paying for a Veteran’s stem cell treatment.

When GMS Racing shut its Xfinity doors, Our Motorsports purchased some of its chassis. Brett Moffitt and Andy Seuss are confirmed to be two of the teams drivers, though more are expected throughout the season.

Previously, Our Motorsports spent time in the ARCA Series with a best outing of second.

Three years ago, Martins Motorsports planned on returning to Xfinity after running 11 races in 2014. Though those plans were derailed, Tommy Joe Martins will run the No. 44 Chevrolet full-time, after running 37 races over the past two seasons.

Expect the Xfinity Series to possibly be even more top-heavy than it was last year. Only six full-time drivers have won a race, period. With that said, Allgiaer, Annett, Burton, Briscoe, Chastain, Cindric, Gragson, Haley, Herbst, Jones, Sieg should be locks for the playoffs. I’ll predict the final spot goes to Clements.