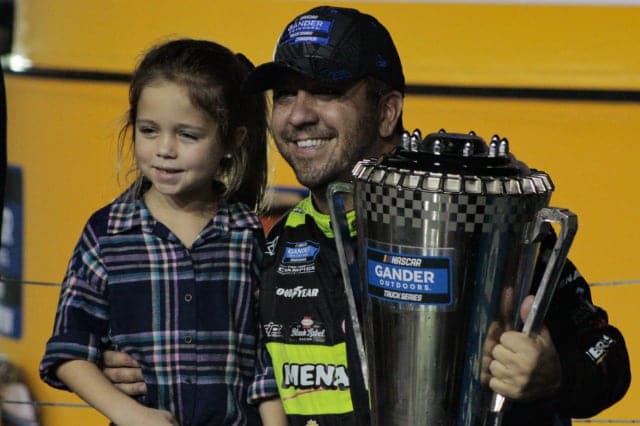 The NASCAR Gander RV & Outdoors Truck Series kicks off its 26th season of competition on Friday night and the division finds itself in a unique position. It appears to be the healthiest of the three major touring levels in terms of participation and the number of entries compared to the available starting spots. Even more remarkable is that this is taking place with the series nearly completely devoid of Cup teams hogging the action.

Sure, Kyle Busch Motorsports is still present but its owner won’t be strapping in for the NextEra Energy Resources 250 this weekend. If KBM is going to swindle the field out of the trophy, it will have to do so with a trio of drivers who have combined for exactly zero wins in the trucks.

So why is the Gander RV & Outdoors Truck Series thriving while the other two tours can barely cobble together enough cars to fill the allotted openings?

Call me biased, but I think the truck races are the best show NASCAR has to offer right now because the field is strewn with competitive teams. Of course, at Daytona, any team that qualifies has a legitimate shot at winning. But on the more conventional race tracks, over a quarter of the entries are trucks capable of winning on any given day. A handful more would be considered long shots, but it certainly isn’t out of the realm of possibility. If you want to race with the greatest likelihood of picking up a win, the trucks are an attractive prospect.

There is also a much lower cost of investment. Running a competitive truck is exponentially less expensive than a similarly capable Cup team. This puts the target monetary figure for sponsorship at a more attainable level. You also wouldn’t have the monumental hurdle of squaring off against Cup money the way you would in the Xfinity Series. This week, it’ll cost a whole lot more to run 10th on Saturday than it will on Friday.

The trucks also have a more grassroots feel to them. There aren’t nearly as many household names driving or even sponsoring them for that matter. The tracks that comprise the schedule are rather diverse and include some of the most in-demand facilities. Eldora, Mosport, among others draw fans in droves. The old school style of racing is all the rage right now. Darlington with its wildly popular throwback weekend has demonstrated how many fans just can’t get enough of the days gone by. Whatever you do, don’t miss the truck race on Friday night. It’s quite possible that it winds up as the highlight of the weekend.

As it often is.

There are plenty of new faces in the trucks this year and several others that are back again. Johnny Sauter, Matt Crafton, Ben Rhodes, Stewart Friesen, and Brett Moffitt among others, return as the veteran statesman of the tour. Meanwhile, KBM welcomes Christian Eckes and Rafael Lessard as its full-time drivers. Also Ty Majeski and Derek Kraus will see their first significant seat time in a truck. Fan favorites Jordan Anderson, Spencer Boyd, and Jesse Little return to their rides as well.

Picking a championship favorite out of this bunch is the next best thing to impossible. Not only is nearly half the field capable of winning but almost all of those same drivers could have a realistic chance to take home the big trophy in November.

Matt Crafton needs a win. The 2019 champion took home the title without a single victory and an early triumph would go a long way.

John Hunter Nemechek is back behind the wheel of a truck this weekend. Nemechek will chase Rookie of the Year honors in Cup but takes another shot at a Daytona win in his family’s truck.

Natalie Decker has a multi-race deal in place to pilot the Niece Motorsports No. 44. She had a lot of struggles in 2019 and it’ll be interesting to see what kind of improvement switching teams will do for her.

Todd Gilliland will race at Daytona for Front Row Motorsports, which will field a truck for the first time. Gilliland, whose father David raced for the FRM Cup team for a few years, moves over from KBM after picking up his first career win last fall at Martinsville. I’m certainly interested in how this team will do given their Cup resources.

The Gander Outdoors Truck Series gets underway on Friday, Feb. 14 at 7:30 p.m. ET. Catch all of the action televised on FS1 as well as broadcast on MRN Radio.

If I had to pick only one series to watch, I’d definitely pick the trucks. They usually put on the best show of the weekend, especially if there are no big name cup drivers in the field. I agree with all Frank said in the article and would add that; aerodynamically I think the trucks are more like vintage nascar cars than the current cup iteration.