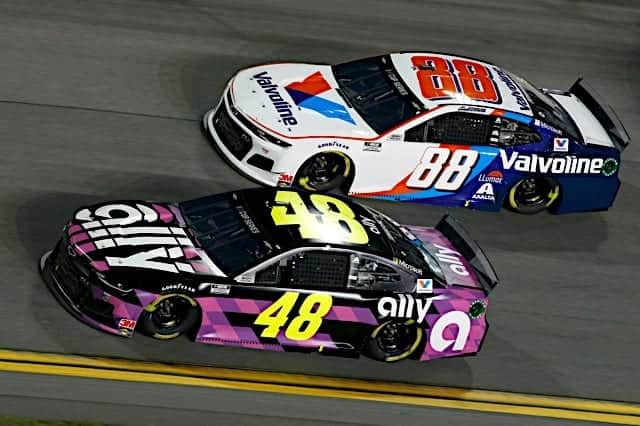 Jimmie Johnson has one last shot to add to his Daytona 500 trophy collection, and he’s feeling confident about heading it following Thursday’s (Feb. 13) Bluegreen Vacations Duel at Daytona.

After starting on the front row, Johnson quickly faded back as his Hendrick Motorsports teammate William Byron got a bad restart from the second row. For the duration of the opening stint, the No. 48 car recovered to run inside the top 10.

On lap 23, all nine Chevrolets in the field elected to pit, and Johnson lost the draft, along with Ross Chastain. Had it not been for a lap 41 caution involving Corey LaJoie and JJ Yeley, the No. 48 car likely wouldn’t have finished inside the top 10.

When the race resumed, a line of six Chevrolets waited until three laps to go to make a move for the lead and Byron squeaked out front. But coming to the white flag, Johnson went from bottom to top, attempting to get by the No. 24.

Though unsuccessful, Johnson held off a hard charging Kyle Larson after saving his car in a three-wide battle with Kevin Harvick and Kurt Busch on the backstretch.

Johnson stated he wasn’t letting Byron off easy, as he wanted to bring the No. 48 back to victory lane.

“Pass his ass,” Johnson said after the race, in regards to what was going through his mind on the final lap. “As I tried to be aggressive and change lanes, I got into a pretty big slide and had to get out of the gas to save it. William did a great job of seeing the run coming and was prepared to handle it and I just got too loose to stay aggressive to finish off the pass.”

As for Sunday’s (Feb. 16) Great American Race, Johnson is more confident in this car than he raced in The Clash last week.

“I feel pretty good, we’ve still got a little ways to go,” Johnson said. “Ironically, a lot better than The Clash car in the draft, which doesn’t make a lot of sense, but we’ll take it. This car is way more trimmed out than that car was, but a good step in the right direction.”

By finishing second, Johnson earned nine points towards the 2020 season. Last year, the No. 48 team had a pair of top-10 finishes at Daytona, the site of his last top-five finish (July).