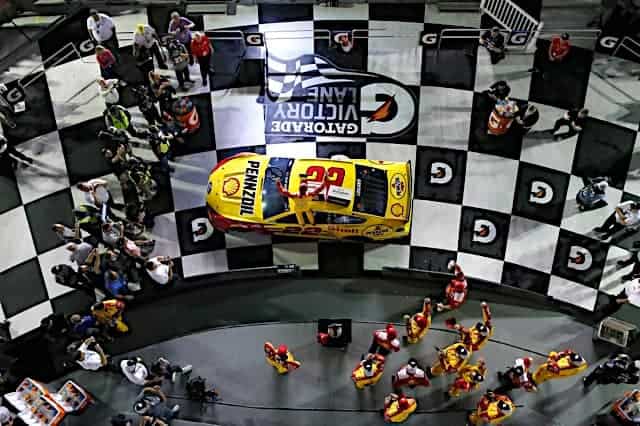 Ricky Stenhouse Jr. was the fastest Chevrolet in Thursday’s (Feb. 13) first 2020 Bluegreen Vacations Duel at Daytona. Team Penske teammate Ryan Blaney caused the race’s only caution. But Joey Logano blasted by both of them, using a push from Aric Almirola to forge to the front and win the first Daytona 500 qualifying race.

The duo locked together in a push that brought back memories of NASCAR’s old tandem drafting used at Daytona International Speedway a decade ago. With the Fords lined up on the outside, they were able to outlast a speedy Stenhouse in the closing laps of the race. In fact, Stenhouse fell to eighth at the finish as Fords captured the top four spots.

For Logano, it was an impressive bounce back performance after being involved in the first Busch Clash wreck four days earlier. It’s also his first victory with new crew chief Paul Wolfe, running his first Speedweeks with a new Cup Series driver in almost a decade.

“I can’t thank Aric Almirola enough, great partner to work with,” said Logano after the race. “It’s the Duels, not the Daytona 500, but momentum is momentum. Working with this new group here, they’re not new to working together but I’m new to working with them.

“Winning anything at Daytona is such a big deal and we’re ready to go for the 500.”

Logano led down the stretch in a Duel that had more side-by-side action than normal in a pack where most drivers had already qualified for Sunday’s Daytona 500. The lone transfer spot was never in doubt as Justin Haley beat his closest rival, Reed Sorenson, by a full lap.

But in the end, the last few turns proved somewhat anticlimactic as Ford drivers opted to battle for second rather than boot Logano out of line.

“I hope I don’t get an assist on Sunday,” Almirola said. “I think things would play out a little differently. But a solid night for all the Fords. You could see us working really well together.”

Further back, Haley in 17th qualified for the Daytona 500 among the four open teams. Sorenson, in 18th, officially made it on speed while Chad Finchum and Daniel Suarez officially failed to qualify.

“I don’t think my crew chief has slept in weeks,” Sorenson said. “I’ve been on the other side of it, where I’ve missed it, and it takes awhile to get over. So it was nice to come down this year and get in.”

Suarez, running for Gaunt Brothers Racing, caused the race’s only caution when he tangled with Ryan Blaney coming out of turn 4. A miscommunication among spotters left Suarez unaware Blaney and other Ford teams were coming to pit road – a decision the drivers themselves weren’t clear on.

“Very simple,” Suarez said afterward. “The [No.] 2 car, he started getting his hand out of the window super super late. I didn’t see him and when I started getting out … the [No.] 12 was there. I’m getting tired of this.”

As for Blaney, he apologized because it was still unclear until the final seconds whether or not his team was even pitting.

“That was dumb on my part trying to pit,” @Blaney says. “I didn’t know we were pitting”.

“Yeah, we didn’t communicate that well as a group. Internet down here is suspect as best,” Todd Gordon replies.

Half the starting lineup is now set for Sunday’s Daytona 500 with the second Duel scheduled to run later Thursday night.