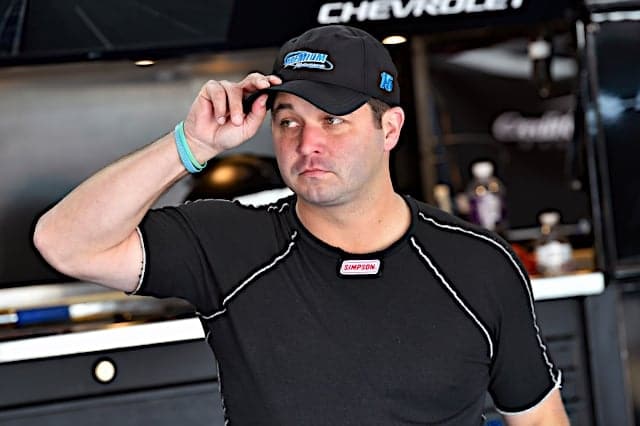 Reed Sorenson will be in the Daytona 500.

The 34-year-old veteran finished 18th in the first Bluegreen Vacations Duel at Daytona on Thursday night (Feb. 13), which wasn’t good enough to qualify for the race. Justin Haley, who had locked his way in with his qualifying lap, raced his way in by finishing one spot higher than Sorenson and finishing highest among open teams. However, because Sorenson had the next best qualifying lap after Haley, the Georgia native will compete in the Great American Race.

“It is a big deal,” Sorenson said. “The money that comes in from this race for a small team is a big deal. It helps us kind of get the ball rolling financially.”

Haley wasn’t in the transfer spot for the first half of the Duel. That spot was held by Daniel Suarez, and had Suarez finished there, Sorenson’s No. 27 Premium Motorsports car would have been sent home. But on lap 30, Suarez was involved in a wreck while Ryan Blaney was trying to get to pit road.

“My spotter was high pitched to say the least,” Sorenson said about when his team saw the incident. “I didn’t have much emotion about it because I was still trying to concentrate on what we might or might not have to do to get in. But yeah, he started screaming at me, and I was like, nobody was around me so I didn’t know what he was screaming about.”

Sorenson was one lap down at the time of the incident and received the free pass from the caution that came out from it. But instead of trying to contend, Sorenson said he willingly lost the draft to keep the car in good condition.

“There was no reason for me to be near them and having a chance of tearing the car up,” Sorenson said. “So once that happened, we were kind of taking it easy and making sure we didn’t screw anything up.”

Despite being in the Cup Series since 2006, this marks only Sorenson’s seventh Daytona 500.

“Any time you try to make this race, it’s very nerve-racking, not only for the drivers, but for the team owners,” Sorenson said. “I don’t think my crew chief has slept in a week. He said he’s finally going to get to sleep tonight.”

Sorenson said the team will race for the win on Sunday instead of starting and parking. The team purchased an ECR engine and looks to be more competitive than in the past.

“This is probably the best motor I’ve had to try to race my way in,” Sorenson said.