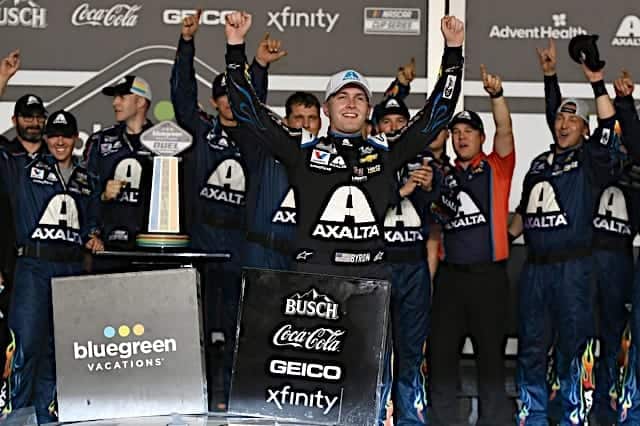 Hendrick Motorsports teamwork up front between Byron and Jimmie Johnson hoisted them to the front during a wild last few laps in an action-packed 60-lap qualifying race. In the end, Johnson and others fell back to battle for second, running three abreast while Byron darted away to his biggest NASCAR Cup Series victory to date.

Byron has still never won a full points-paying Cup race, coming in second at Martinsville Speedway last fall. But it’s a strong step in the right direction for a 22-year-old hoping to make 2020 a breakout third season on tour. He led the way as Chevrolet drivers, including Kurt Busch, Kyle Larson and others seemed to stick together much better than at any time throughout the week.

“No, there wasn’t any Chevy orders or anything like that,” Byron said. “We just did a good job working together. Kurt [Busch] was a good pusher and a good helper and I had a lot of trust in him. Just made it there, got to second and then Kevin [Harvick] got really nice and didn’t pull a big block.

“This car looks really good, I’m sure it looks good under the lights. Really excited for the 500.”

Harvick, who led a race-high 34 laps, had to settle for the fastest Ford in fourth place.

“When they’re coming that fast, it’s putting a lot of risk to block,” Harvick said. “We’ve seen how that works out. We put ourselves in position to have a chance there. Matt [DiBenedetto], he was a heck of a pusher, but it was the two against the rest of the Chevrolets and we kind of held our own tonight.”

The battle for the final transfer spot, like the first Duel race, became anticlimactic. JJ Yeley made contact with Corey Lajoie midway through the race, causing the only caution flag and ending Yeley’s shot of making the Daytona 500.

That was a tough way to end our quest to make the 500. Battled hard the entire race, felt like I was in a good position to race in, especially with the 62 stuck without drafting help. Hate it for my @RickWareRacing guys! They worked their asses off to get crashed ?‍♂️

That left just two open cars in the field, Brendan Gaughan and Timmy Hill, who were both guaranteed to make the Great American Race either through the Duel itself or on speed.

It’s a meaningful moment for both. Gaughan is retiring after the season, making this 500 his last, while for Hill it’s his first Daytona Cup event in 92 career starts.

“It crossed my mind I might never have a shot at this,” Hill said while explaining his credit cards were currently maxed out. “For our team, personally, making the Daytona 500 is a big difference.”

Hill’s No. 66 and MBM Motorsports are running full-time as an open team this season. The unchartered status means they’ll have to qualify into each of the sport’s 36 races on speed.

Thursday’s win also is the most significant for crew chief Chad Knaus since leaving Johnson at the end of the 2018 season.