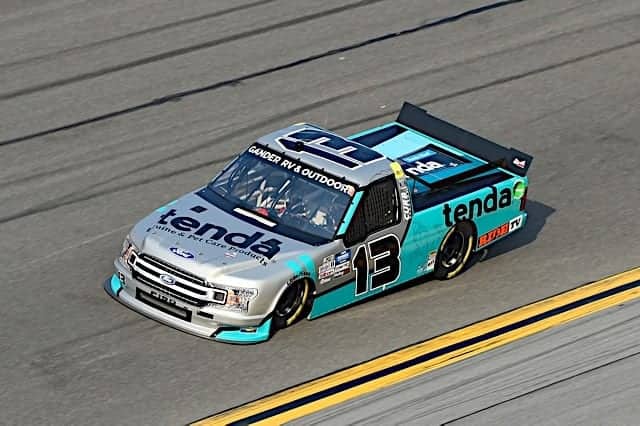 In the first practice, it was Smith who led the field at 193.174 mph. Riley Herbst was second, followed by Ty Majeski, Joe Nemechek and his son, John Hunter Nemechek, rounding out the top five.

There were two incidents in the first session as Clay Greenfield stopped on pit road and was unable to continue. Sauter also was unable to get his car going after stopping on the apron in turn 1. Sauter’s team was seen late in the session replacing wiring components and were able to get on track for the second practice.

Korbin Forrister ran the most amount of laps as he went 26 circuits around the 2.5-mile superspeedway.

In the second session, Sauter was the fastest with a speed of 193.278 mph. His teammate Crafton was second, followed by Austin Hill, Derek Kraus and Christian Eckes rounding out the top five.

There was only one incident, as the No. 34 of Josh Reaume slowed on the backstretch after smoking in turn 2.

Qualifying for the Truck Series will take place tomorrow (Friday) at 3:10 p.m. ET, with the race going green around 7:30 p.m. ET on FOX Sports 1.

Nice work using the link for practice 2 setup to some random finish for some race on Twitter and not the practice 2 results. Great start to the writing season. Look forward to many dumb links that make no sense on this page this year, like last year.