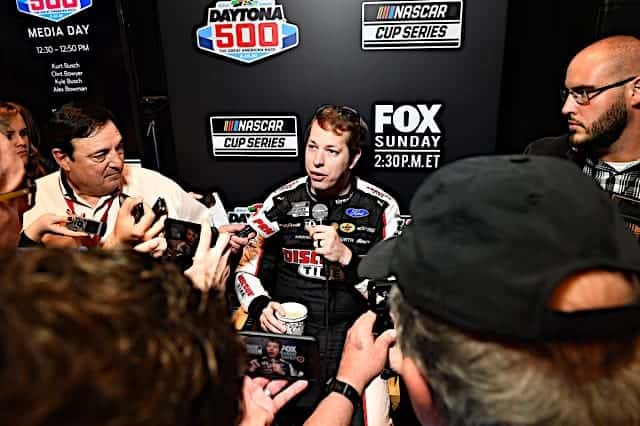 The NASCAR Cup Series’ Busch Clash ended with more cars sitting damaged in the garage than racing on the track. Is there a need to change anything about the event?

Amy Henderson: I’m not sure the event is necessary at all, but if the teams want to keep it, that’s OK. At least most of the teams who qualify are the bigger ones who can afford to destroy a car just because. I’d like to see it go back to what it originally was: 20 laps for the paycheck and done. Eliminate pit stops, just go race for a big check.

Adam Cheek: You really can’t change anything without nixing the event altogether. Sunday’s race consisted of some of the sports’ best; seven of the 18 entrants were past champions, and all but three have won at least two races in Cup competition. At least with the first and last crashes on Sunday, they were just a part of aggressive racing (of course, the second wreck was a restart pileup and the third was the result of Denny Hamlin‘s cut tire). It would be hard to tell the drivers to ease off – they’re in the race to win it, after all – and the veritable junkyard on Sunday was just a result of that.

Bryan Davis Keith: The event needs to end. NASCAR is gutting some of what it makes its racing great in the name of cost savings, so removing a superspeedway race from the calendar would realize major savings. Plus, with as many changes on top of changes on top of changes that have been made to the format of both Cup qualifying and the Clash, the prestige of the race is gone. Shoot it between the eyes already.

Zach Gillispie: Unpopular opinion: the Busch Clash was very entertaining. Sure, everybody crashed except for maybe Austin Dillon, but the overtime finish was phenomenal because it truly seemed like every man for himself. Generally, it is always an exciting event to kick off the new season after nearly three months of hibernation no matter if it’s a full field fighting at the finish or a few duct-taped jalopies, as was the case Sunday. If there is one change that needs to be made, go back to how it was in 1979 and just run 20 laps. No pit stops, no strategy, just an all-out sprint.

2020 features one of the more accomplished groups of Cup rookies in recent memory. Who will have the best showing on Sunday?

Gillispie: John Hunter Nemechek. Now, hear me out on this. Sure, Nemechek might not be in the best equipment compared to his rookie counterparts, but he has two things going for him: experience and a reliable team. Nemechek has garnered some valuable experience in the lower series on superspeedways. By pacing himself as he has moved up the latter, he has been competitive at Daytona International Speedway and Talladega Superspeedway, and he will continue to produce in Cup. Plus, Nemechek, along with Brennan Poole, are the only rookies that will perform double duty at Daytona, as both are slated to compete in the Gander RV & Outdoors Truck Series race Friday night. Reps always matter. Finally, Nemechek drives for Front Row Motorsports. How often have we seen an FRM driver near the front at the end of a superspeedway race?

Henderson: You won’t hear me say this very often this year because equipment matters too much everywhere else, but Tyler Reddick. Christopher Bell might be the most talented among this year’s rookie class (though he doesn’t have much on Reddick), but you know what he doesn’t have? A superspeedway win in any series. Reddick has two in Xfinity, one in Trucks and a top five at Daytona in the ARCA Menards Series. He also has the advantage of having run the Daytona 500 last year. Reddick’s disadvantage in equipment will show up at other tracks, but he can compete this weekend.

Keith: The best showing from the rookie class on Sunday will come from the one of them that’s actually run the 500 before, Reddick. Reddick knows what to expect from the pack racing at this level, and of all the rookies he was the strongest performer on the superspeedways in Xfinity racing last year. Remember Reddick single-handedly broke the field out of single-file time and time again to win at Talladega last spring.

Cheek: Reddick. Cole Custer is my pick to have the best season of the rookies, and Bell will have a solid 2020 as well. However, with Daytona being the unpredictable beast that it is, fortune favors Reddick – he’s won superspeedway events in Xfinity at Daytona and Talladega, and also won in the Truck Series at Daytona in 2015. Reddick also ran well at both Daytona events last year, finishing ninth in February and getting caught up in a crash in July. He’s very solid on superspeedways and should have a strong showing on Sunday (if he misses the inevitable Big One, of course).

Which driver needs to win this year’s Daytona 500 the most?

Cheek: Brad Keselowski. Yes, drivers like Kyle Busch and Martin Truex Jr. haven’t won the Daytona 500 in careers full of milestones, but Keselowski is coming off a relatively average 2019 – he did win three races but suffered a Round of 12 elimination and his fewest top-10 finishes since 2013. He’s been solid at superspeedways in the past (he’s won Talladega five times and won at Daytona in the summer of 2016), but he hasn’t had a top-10 finish in the 500 since 2013 and finished a distant 12th last year after being involved in three crashes. I’ll be looking for that No. 2 to contend on Sunday.

Keith: Keselowski for a ton of reasons. He’s a free agent whose stock is down. He’s had a miserable start to Speedweeks, running his 500 car into a garage fence and getting wrecked by his teammate’s mess in the Clash. His prowess in superspeedway racing has been tarnished by a string of crashes and by his “I’m not lifting” tirade at Daytona last summer that went misunderstood by 90% that heard it. And on a more positive note, it’s one of the few crown jewels the sport has left for a Cup champion, Brickyard champion and Southern 500 champion to win.

Henderson: There’s no contract on the line, there’s no lack of a Daytona 500 trophy on his shelf and it won’t make him an instant title favorite, but nobody needs the win more than Jimmie Johnson. As a driver, Johnson doesn’t have to prove anything to anyone, except himself. A win would be a great boost for Johnson, who hasn’t won in almost three years, and for the No. 48 team, which will be looking for a new driver after this season. Only five drivers have three or more wins in the Great American Race, and if Johnson can get just one more win in his Hall of Fame career, this would be the perfect one, giving him one more feather in his already loaded cap.

With only three Xfinity drivers having more than one career win entering 2020, who is most likely to have a breakout season?

Keith: Austin Cindric. With both Ryan Blaney and Keselowski free agents after 2020, there’s a Penske Cup seat ripe for the taking if Cindric can deliver this year.

Gillispie: No Big Three? No problem. Chase Briscoe will absolutely dominate the series in 2020.

Henderson: Ross Chastain is the most talented newcomer, but…  the equipment thing again. Harrison Burton has the best equipment, but he’s awfully young and really could’ve used another year in a truck. I’m not sure there will be a Big Three as big as last year’s, but I do think Briscoe and Cindric will battle it out for a bunch of wins, Justin Allgaier will grab his share, and guys like Chastain and Noah Gragson will get a trophy at some point.

Cheek: Chastain. He has two part-time wins in the series (Las Vegas Motor Speedway in 2018 with Chip Ganassi Racing, Daytona in 2019 with Kaulig Racing) and joins Kaulig full time in 2020. Chastain’s showed great promise in Xfinity competition, and his three wins in the Truck Series also back his statistics up. With a solid teammate in Justin Haley, I look for Chastain to elevate Kaulig Racing and to make a run in the playoffs, and to score a few wins while he’s at it.

I had the same thought that Amy voiced. Most of the teams that participated in the Clash could afford to write off a car. And its not like they all were completely destroyed. Many of them just need a bit of fabrication work. The clash is usually a nice little appetizer before the main course to start the season. Keep it.