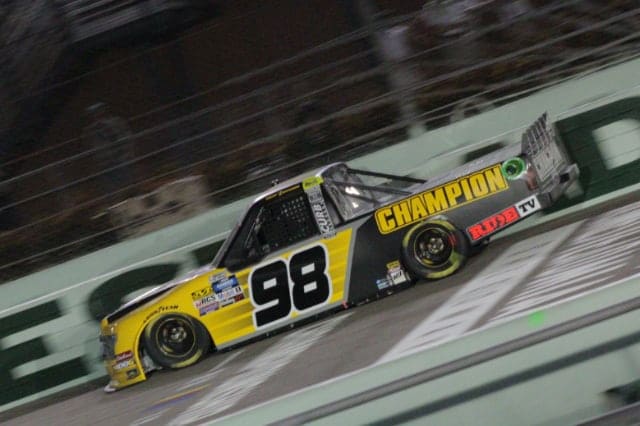 Grant Enfinger won the 2019 NASCAR Gander RV & Outdoors Truck Series regular season points title. But he never could win a race, failing to advance past the first round of the playoffs. He entered Friday’s (Feb. 14) season opener at Daytona International Speedway winless since September 2018 at Las Vegas Motor Speedway.

Enfinger held off Jordan Anderson by .01 of a second in a beating, banging side-by-side run to the checkered flag in the 2020 NextEra 250. The No. 98 Thorsport Racing Ford held on, out front when a major wreck eliminated several top contenders with less than three laps remaining.

On the NASCAR Overtime restart, Ross Chastain pushed his friend Enfinger up front and into clean air. It was the right place, right time for him after seesawing back and forth through the pack in one of the more intense Daytona Truck Series races in recent memory.

“I made a mistake with about 20 to go,” Enfinger explained. “I got hung up in the sucker hole, I pulled up in front of Ben [Rhodes] too late. At that point, I was pretty confident a wreck was going to happen, so I tried to bide my time on the bottom. It got to four or five laps to go, time to go and I was able to get the lead in that big wreck in turn 1 and 2. That sealed the deal for us.

“Our buddy Ross gave us some good pushes at the end. Just an unbelievable night.”

That crash was started by Enfinger’s Thorsport Racing teammates as Rhodes and Johnny Sauter made contact while trying to bump draft. Rhodes wound up spinning out and the resulting wreck collected over a dozen cars in the front pack. Tyler Ankrum, Sheldon Creed and Todd Gilliland were among the biggest contenders collected.

Take another look at The Big One late in the going at @DISupdates. pic.twitter.com/CUxas7h7Cc

Rhodes suffered the most serious damage but was treated and released at the infield care center. He declined to talk with Frontstretch, clearly emotional after his potential winning run fell apart.

When the smoke cleared, that opened up opportunities for small teams like Anderson’s. The No. 3 truck busted through the pack on the final restart and pushed his way up to second after Chastain slipped up in turn 1 on the final lap. In the backstretch, heading into turn 3 Anderson closed in and the independent driver seemed poised to sneak past Enfinger for a major upset.

It didn’t happen. Heading into the tri-oval, Anderson got to Enfinger’s outside but the No. 98 scraped off just enough momentum by side-slamming the No. 3 to eke out a victory.

“Man, there’s not too many opportunities that you get to go for the win,” Anderson explained after his best career Truck Series finish. “I’m almost speechless for words. To be in a position to go for a win in Daytona… I’m just a kid from South Carolina that wanted to go racing. God is good.

“You look at our race team, and the opportunities that we’ve had, God’s put the right people in my path. The journey isn’t easy but it’s worth it. I thought we had it. But to try and put into words what it means for this team. We knew we needed to bring the best truck we could. This is what NASCAR’s about, man. To do this for every one of my guys. Aaaahh, this is Daytona, we almost won!”

“I feel like I hit Jordan really good, but just square in the door,” countered Enfinger as to how he was able to hold on. “As soon as he got in my right rear and stalled me out, he just went right to the wall which is what he’s supposed to do. I don’t know if I could do it again if we tried – just fortunate enough to work out tonight.”

Behind him, the next three drivers all earned their best career finishes. Codie Rohrbaugh roared back from an early race spin to wind up third. Rookie Derek Kraus recovered from losing a lap on an unscheduled green flag pit stop to end up fourth. And Natalie Decker, in a new partnership with Niece Motorsports, came home fifth for the best ever Truck Series finish for a female driver.

“We were riding around in the back, and that was our plan, but it was so worth it,” Decker said. “It just feels so good. We had such a good team effort and plan and we all stuck to it.”

With Decker’s top 5, there has been one top five finish by a female in each #NASCAR national touring series.

The victory marked the 100th for Ford in the Truck Series and gave Enfinger an early edge on a postseason bid.