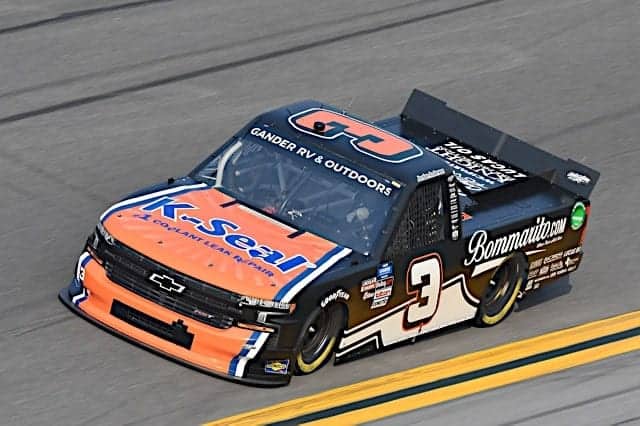 Jordan Anderson was just a few inches shy of pulling off one of the biggest upsets in recent memory.

“It’s Daytona, we almost won,” Anderson said excitedly in a FOX Sports 1 interview after the race.

Anderson ran in the mid-20s for most of the race and off of the lead draft. But he survived the Big One with three laps to go, getting him up to sixth for the final restart.

Anderson worked his way up to second, and on the final lap, Anderson and Enfinger door-banged each other from the exit of Turn 4 to the start/finish line, with Anderson just missing out on his first career win. Anderson compared the moment to a video game.

“Hey, Grant [Enfinger], Grant, what are you doing door-slamming me, man?” Anderson said as he watched the replay of the incident. “I thought I set them up good. We tried to follow Ross to push him and he really got loose. And I got on Grant’s bumper coming off of [Turn] 4, got a good run, and I’m like, man, this is like NASCAR Thunder 2003 all over again. I’m like, I can do this. And I’m pushing him out of the way, and I thought we had it.”

Still, the second-place result was a career best for the owner/driver, and it was his first top five in 102 Truck Series races. His previous career-best finish was a seventh at Talladega Superspeedway in 2018.

“I’m almost speechless for words,” Anderson said. “I came here in 2015 and emptied my bank account to try to come down here and run. To be in a position to even go for a win in Daytona, man, I’m a kid who just wanted to go racing from South Carolina.

You know me, I’m usually not speechless. God is good. You look at our race team and opportunities we’ve had. And it’s just because people have come in and believed what we’re doing and what we’re trying to do. And God’s put the right people in our path.”

Daytona is the highest-paying Truck Series race of the season, and a second place is huge for the underfunded Jordan Anderson Racing, now in its third year of operation.

“To try to put into words what this means for our team, I had to move some money around this winter just to get through and to buy this truck,” Anderson said. “And we knew we had to bring the best truck we could. This sport isn’t easy, and I love NASCAR. I love this sport, and this is what NASCAR is about, man.

It’s great to see Jordan get such a great result. I thought he had it there as when they came together Anderson was clearly ahead. Still, wonderful race for him. His excitement last night was contagious. I’m smiling now as I type. You really like it when an underdog does so well.