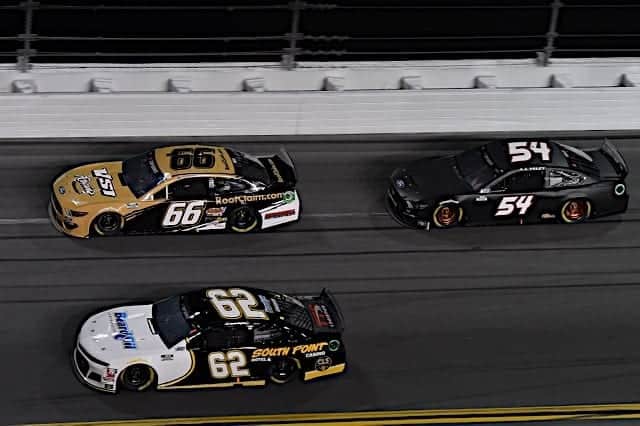 Entering Bluegreen Vacations Duel number two, Timmy Hill had to race his way into the Daytona 500. Based on the outcome from the first race Thursday night (Feb. 13), he needed to finish ahead of JJ Yeley. Hill raced alongside Yeley for awhile in the race, but a lap 43 crash ended Yeley’s night, putting Hill into the 500 field.

“First off, I’m really proud of the car our team prepared for this race. They brought me a beautiful racecar,” Hill explained. “They invested a lot of money to rent a Roush-Yates motor. It really had great power all night long and allowed me to hang with the lead pack. People didn’t give us much of a shot, so to come into this race as an underdog, we really proved to people that we belong.

“As for the team, they jumped off the wall in celebration and I could hear their voices on the radio. For me personally, this is my 10th year in NASCAR and first time making this race. It really is special for me.”

The 2020 Daytona 500 will be Hill’s first time competing in the Great American Race. It is a dream come true for the 27-year-old from Port Tobacco, Md.

“I don’t know how long it’ll take to get this smile off my face. As a kid, as a racecar driver, it’s a dream to run in the Daytona 500. I’m fortunate enough that my car is very competitive [and capable] of running well in the race.

“We’re here not to participate, we’re here to race.”

Hill has served as a jack of all trades for MBM Motorsports, competing in the NASCAR Xfinity Series and Cup Series. In some instances, he has qualified a car on speed and then start-and-parked. Because MBM Motorsports is a low-budget team, there has been pressure on Hill to make the race and garner a paycheck for the team. He is grateful for MBM Motorsports team owner Carl Long.

“Carl has really helped me out in my career. I didn’t have a lot of opportunities and he put me in a racecar. I had a lot of weight on my shoulders to make this race, but I felt confident we could…”

In addition to racing the No. 66 Ford in Sunday’s race, Hill will attempt to make the Xfinity Series season-opener, also at Daytona. He has run well at this track in that series, with three top 10s in eight career starts. Will the momentum from successfully making the Daytona 500 translate into that race?

In addition to having 40 drivers entered for the race, this season the Xfinity Series field size is 36, a reduction of two from 2019.

“We’re in a position where we’re not locked in on points. This group has really prepared an awesome Toyota with an engine from Joe Gibbs Racing,” he continued. “That car will be just as strong if not stronger. That car ran top five with less than 10 to go in the July Daytona race. Our car for the Xfinity race Saturday will be a really good piece. The excitement alone will definitely carry into that race.”

The draft at Daytona equalizes the field, allowing underfunded teams such as MBM Motorsports an opportunity to grab its best finish of the season. Hill feels good about his chances of racing a doubleheader.

“The last few times I’ve been here I’ve had a fast car, especially in the Xfinity Series. I’ve driven some really weak cars where I can barely hang in the draft, crossed my fingers and hope a bunch of cars would crash out [in the past]. I have good racecars here this weekend.

“I can take this racecar and make some moves that I couldn’t do before. With a Roush motor in our Cup car and a Gibbs motor in our Xfinity car, it’s a game-changer for us.”

In addition to making the Daytona 500, Hill and MBM Motorsports also benefitted from the misfortune of Daniel Suarez wrecking his No. 96 Gaunt Brothers Racing Toyota.

Two big wins for @TimmyHillRacer & @MBMMotorsports; they will receive a nice paycheck from the #DAYTONA500 & they will accrue points whereas @Daniel_SuarezG & @GauntBrosRacing will not. Both organizations will fielding full-time open cars this @NASCAR season

“It takes a lot of money to get here, to buy licenses and buy motors. Making the race is a big difference. For my Truck Series team [Hill Motorsports], all my credit cards are maxed out. I know Carl [Long] is the same way. The pay day will be used to pay off our debts. For those guys [Gaunt Brothers Racing], they have a lot of money coming in. I’m super grateful we made this race.”

Admittedly, with a shoestring budget, it’s unclear what the end result would have been if he had not made Sunday’s field.

However, that question is now academic because Hill will compete in the 2020 Daytona 500.