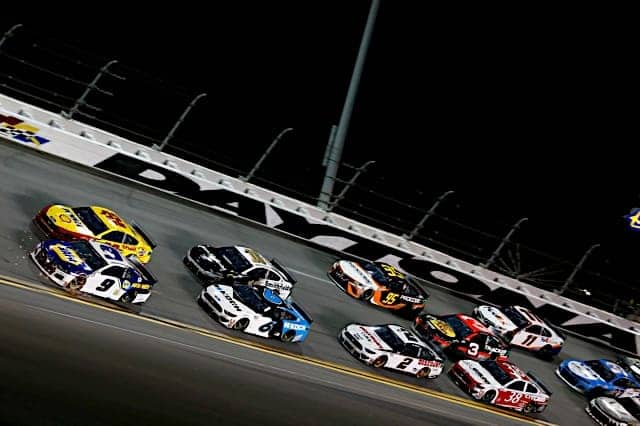 The duel qualifying races at Daytona make the 500 one of the most unique races on the Cup Series calendar. Instead of the field being determined by just qualifying, the starting lineup is effectively cut in half, with the inside row and outside row’s final starting position decided by two 60 lap races.

Turning the duel into a weekly concept would be a disaster. Sure, there would be two more fairly big events to sell to fans at racetracks during any given Cup weekend, but it’s not worth the extra time and cost for the teams. It would also probably result in less overall practice time for any race series participating on the weekend. And it hasn’t been a huge success in recent times; the heat races the Xfinity Series experimented with a few years ago weren’t disasters, but they definitely seemed a little flat.

But at the same time, the prestige it gives to Daytona makes it an appetizing idea. And while the Duels at Daytona are usually fairly mild-mannered, including this year’s (for the most part), that might not be the case at both a non-superspeedway track and if half the field hadn’t seen a Cup green flag in the three months beforehand.

Heat races would theoretically make the main races shorter, something that has been argued would be a good thing for younger viewers. Finally, look at those tracks the Xfinity Series chose for its Dash 4 Cash events the year it had heats. Dover? Indianapolis? The best of these races was… surprise, Bristol, a track that was made for heat events.

At the same time, races have stages now. Would duels at places outside of Daytona such as short tracks be too much now? If NASCAR considered giving a fourth stage to every race this past off-season, who’s to say something like this wouldn’t also be on the docket? If NASCAR were looking to make bite-sized, stream-able content, then why not take a chance and run a couple of 25 lappers at Bristol or Martinsville?

Who will make that next step in Xfinity?

Saturday marks the start of the 39th season for the NASCAR Xfinity Series since being upgraded to a national touring series in 1982, which is shaping up to be one of the more interesting in recent years.

With the three most dominant drivers over the past few seasons all moving up to Cup, the time is right for Chase Briscoe to make a huge leap. Briscoe really seemed to have a breakout last half of last season as arguably the fourth-best driver in the series before being eliminated in the playoffs. While Justin Allgaier is the clear-cut championship favorite, when it comes to developing the next Cup driver, Briscoe is going to have a leg up on the competition.

. @ChaseBriscoe5 says if he only wins one or two races this year then his season is a failure and he likely loses his ride. Said around eight wins will move him up to Cup pic.twitter.com/oRjPJsO5uN

Meanwhile, Noah Gragson has always seemed like he’s had all the tools to be a great Cup prospect. The problem last year was that he never really seemed to get out of neutral and up to full speed. With one year under his belt, it’s up to him to put it all together and win a championship for JR Motorsports.

A big question mark will be Ross Chastain. After his impromptu championship-contending run in the NASCAR Gander RV & Outdoors Truck Series last season, there’s no doubting just how talented the Floridian is, but it’s still very questionable that Kaulig Racing is ready to compete at Chastain’s talent level every week. They didn’t last year with one full-time car, so what’s different with an expansion to two cars outside of potentially spreading the team’s resources too thin?

What’s going on with JGR this season?

Of all of the interesting aspects of the Xfinity grid, there are two drivers that I’m not alone on being extremely bullish on.

Harrison Burton probably isn’t ready for full-time competition. Yes, he had some good runs in limited starts last year. But he didn’t even lead a lap or finish higher than fourth, his only top-five finish in nine total races. And his Truck Series results with Kyle Busch Motorsports? How did he not win a race in 38 starts? How did he have an average finish of 12th last year and not make the playoffs in KBM equipment? I’m not saying Burton would be a lost cause at all because he definitely has some potential. But at the same time, maybe the 18-year-old shouldn’t get a promotion after not wowing the year prior with what he had.

And Riley Herbst? Really, Herbst? Herbst might not be ready for a full-time Truck Series ride, let alone Xfinity. He won an ARCA race, but that was three years ago now. Since then, he’s balanced his time between being a wrecking ball and under-performing in JGR equipment in ARCA. Yes, ARCA. Now, something tells me this wasn’t a Gibbs decision and it was more of a Monster Energy decision. In fact… yes, that’s probably the case. But Monster is actually doing this guy more harm than good in his career.

Instead of letting him, I don’t know, develop in relative ARCA obscurity, Monster is throwing a green-as-grass driver out there in a premier ride on one of the biggest stages in NASCAR. Remember how highly regarded Reed Sorenson once was, and then how Chip Ganassi Racing leapfrogged him up to Cup? Now Sorenson is “washed up” at 34 and is never going to get a look from a well-funded team again. That’s Herbst’s future if he doesn’t watch out.

Throw these two together with Brandon Jones, and we have a truly remarkable lineup for the team that has long been regarded as the best of the bunch in Xfinity competition. Thank goodness at least two Cup drivers are going to come down and win at least six races for them this season.

Yes there will be a fourth JGR Xfinity car. Team hasn't announced races. Hamlin expected only to do Darlington. KyBusch will do 5 but team has not said which ones. #nascar @NASCARONFOX https://t.co/bhx5lx5MZD

The 62nd running of the Daytona 500 is shaping up to be one of the more unknown 500s we’ve seen in a long time.

My own guess as to how the race is going to go down will be similar to the Clash last weekend. Not much in the first 90% of the race before all-out insanity over the last 20 laps. Manufacturers will wall themselves off and work together, like they have all week, until those last 20 laps when all bets are off.

With that being said, the clear favorite to me for Sunday is going to be Kyle Busch. Yes, he’s the obvious pick as defending champion. But no Cup driver is better at pulling off gif-worthy saves at Daytona. Nobody in the field is a better overall driver. Nobody in the field represents their manufacturer quite to the extent Busch does.

And ultimately, when facing the unknown, the best bet is to go with what you know. If Busch survives to those 20 laps and knowing the above, he is the optimal option to both win the race and etch his name in history for the first time as a Daytona 500 champion.