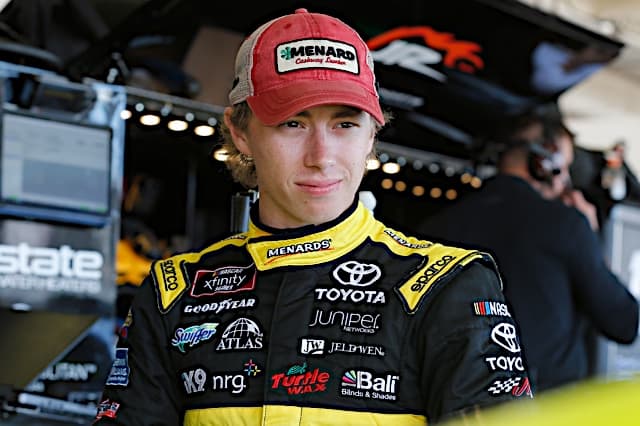 Tyler Reddick has graduated to the NASCAR Cup Series for 2020, but that hasn’t stopped him from being on Brandon Jones‘s mind through Daytona Speedweeks for the sport’s NASCAR Xfinity Series. For one, Reddick was one of the most influential superspeedway racers the NXS had last year. It’s left Jones studying how Reddick was able to sustain that level of success.

“What you saw was him [Reddick] putting himself in race-[winning] positions,” Jones told Frontstretch. “He was aggressive with the side drafts and did what he had to win the race. That was some stuff that I picked up on that I was trying in practice today. Also, keeping the car poked out to see how the runs were getting.”

Jones certainly was aggressive in the one Xfinity practice he did participate in Friday, logging valuable drafting laps with rookie teammates Harrison Burton and Riley Herbst. But that aggression also saw Jones involved in a near-incident with fellow title contender Justin Allgaier on the backstretch. That’s consistent with the aggression Jones professes he will bring to the track in 2020.

“You hear rookies say they just want to paint that bottom line, I just don’t think that’s how you win the race,” said Jones of his chances at Daytona. “That’s how you be a consistent finisher, maybe get a top five, top 10 out of the deal, but if you want to win the thing, you’ve got to make those last minute moves…

“It’s tough now because there are so many good cars out there racing that almost no one wants to go with you anymore. You have to figure out how to leapfrog those cars and side draft very aggressively.”

Aggression will also be needed to reach the ambitious goals Jones has set for his No. 19 team in 2020. Despite having one only one Xfinity win in five full-time seasons at this level, Jones has set a high benchmark for his team.

“I think five wins is reasonable, looking at 15 top fives and 25 top 10s,” said Jones. “Obviously, things are going to happen, you’re going to have DNFs here and there… But looking at the tracks on the schedule, I don’t think there’s one where we’ve finished out of the top 10 on. Looking at the way we ran last year, our speed, it’s reasonable.”

2020 is a different year in Xfinity. The competition level is expected to be a bit less formidable with Reddick, Cole Custer and teammate Christopher Bell, last year’s “Big Three,” all promoted to full-time Cup competition. But that also means Jones is now the senior driver in the Joe Gibbs Racing stable. It’s a role he’s willing to embrace.

“It’s kind of a weird role,” admitted Jones. “I’m all of a sudden getting asked some questions about some guys. Which is cool; I’m always looking for the next challenge.

“The biggest thing is making sure everyone knows what they need to do and that my other two teammates can come talk to me about life situations or race situations. I’m going to give them an honest answer.”

Playing the big man in the JGR organization is necessary for Jones, at least for opening weekend; he’s carrying a storied paint scheme that, when asked by Frontstretch, Jones described as “bad to the bone.” But there’s also a story behind a sponsor that backed the original Joe Gibbs Racing car way back in 1992 and then their first Cup title, in 2000, with Bobby Labonte.

“One cool thing about Bobby [Labonte], when Nick Harrison was still with us and I was with him crew chiefing, we talked about and we were trying to get Bobby as a driver coach for me,” recalled Jones. “It was cool. We never got it lined up, but it’s kind of cool to be able to look up to Bobby in that sense, to have it on the car now.”

If there’s a year for Brandon Jones to channel Bobby Labonte, it’s 2020.