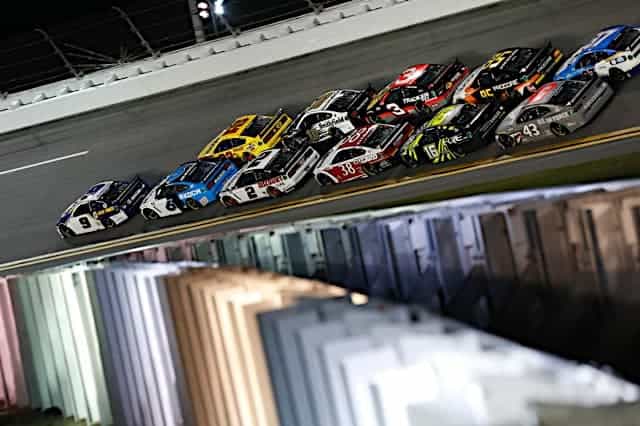 With all the hype surrounding the 2021 NASCAR season, and with it promises/illusions/hopes of better racing, racier cars and a radically altered schedule combining new (street courses) and old (the return to the Nashville Fairgrounds is sounding a lot like the dragons in early Game of Thrones… they’re coming), 2020 seemed almost forgotten.

It shouldn’t be. As important as building for the future is, the present can’t just be sacrificed. It can’t be taken for granted that the fans will hold their noses until the shiny new toy is ready to play with. And while 2020 in NASCAR is not the battle for the nation’s soul that cable news and the idiots all over government insist 2020 is for America, it will set the tone for the significant investment NASCAR is putting into the Gen-7 car that will debut next year.

Fortunately, NASCAR seems to have gotten the message. Working within the constraints of current scheduling agreements, the 2020 schedule altered the calendar if not the schedule itself, moving the championship race off a 1.5-mile cookie cutter, putting short tracks and superspeedways into critical elimination races throughout the season, and giving the fans at least a few new options, including a highly-anticipated night race at Martinsville.

That went further in the offseason, when NASCAR to their credit bucked what the Race Team Alliance had opposed only a year before, creating a short-track specific race package in an attempt to improve woeful on-track product that neutered Cup races at Dover, Martinsville, Phoenix and Richmond in 2019. While disaster was narrowly averted (The Athletic’s Jeff Gluck had reported strong consideration had been given to adding a third stage break into Cup races this year), these are tangible positive steps for a sanctioning body that has long proven able to break what ain’t broke.

Fast forward to the night before the Daytona 500, and the upswing continues. The wreck fest that passed for a race in the Busch Clash has been all but forgotten thanks to a strong week for all forms of stock car racing across Florida. The premiere race of the ARCA Menards Series East filled New Smyrna Speedway to over capacity. Two nights later, that same track saw one of the closest finishes in the history of motorsports play out in a mesmerizing modified race.

Thursday night, the Duels at Daytona overcame a small field with little qualification drama to put on a stellar show of high speed drafting that saw the best in Cup racing putting their 500 cars on the line for arguably nothing, and doing it without a major incident. What’s more, the Chevrolet camp that’s been on its heels for the past year trying to counter Ford’s strength on the superspeedways… and Toyota’s everywhere else… has found footing. William Byron snapped Ford’s streak of three consecutive Duel wins, while Daytona 500 polesitter Ricky Stenhouse Jr. turned Hendrick Motorsports’ engine dominance into staying power in the draft. This year, parity is served at Daytona, with all three makes having a legitimate shot at the Harley J. Earl.

Friday night scored one for the underdogs, with Jordan Anderson emphatic on TV (and trending nationally on Twitter) after coming within inches of knocking off veteran Grant Enfinger in the closing laps. Saturday saw the young guns break through, with Noah Gragson shaking off a maligned 2019 season with a dominant win in the Xfinity Series race, one that brought about the most euphoric victory celebration NASCAR has seen at any level in recent memory:

Noah Gragson burns down the yellow line, celebrates atop the car, then climbs the fence, then pretends to get a campfire going. pic.twitter.com/rdYUrhVvAw

Sunday promises to be something special. For the fifth year in a row, the 500 is a sellout. The Cup cars look able and ready to put on a phenomenal race, with the field able to pass and recover from being shuffled out of the draft almost at will. And the race has become (more of) a national story, as for only the second time ever, a sitting President will be in attendance; President Donald Trump has been named the Grand Marshal for the event.

It’s hard to fathom how NASCAR could have any more momentum going for it at this point in Speedweeks. But more importantly, there are subtle signs that NASCAR is behaving in a way that could (finally) capture that momentum for a longer haul.

Check out the officiating of the races through Speedweeks thus far. Even going back as far as last Saturday’s ARCA race, phantom debris cautions are nowhere to be seen. Race officials have been patient in throwing yellows for spins on track; NASCAR waited for nearly a corner’s worth of racing on the final lap of Saturday’s Xfinity race before throwing the yellow for Michael Annett’s wreck on the backstretch. FOX’s Bob Pockrass noted the same thing earlier for a lap 38 incident.

appears last couple of days NASCAR wanting to let spins play out instead of being quick to throw the caution.

Friday’s Truck Series race could have seen an often penalty-happy sanctioning body punish Todd Gilliland for being forced below the yellow line to the trioval apron (where he made arguably the save of the young season), or punish those that forced them down. Instead, the correct decision was made to let a racing incident go, and the race itself play out.

It hasn’t been perfect down here. NASCAR’s decision to impose a fine of $50,000 on Carl Long’s MBM Motorsports team for illegal nose modifications earlier on Saturday seemed draconian. For one, Timmy Hill still qualified for the race without the mod, and went on to score a career-best finish in the race. More notably, this isn’t the first time that big bad NASCAR has all but stomped on Carl Long; in 2009, the sport fined Long’s then-Cup race team $250,000 for an engine infraction… in the exhibition All-Star Race. Good thing MBM’s got a car in the Daytona 500.

I told fellow Frontstretch writer Joy Tomlinson last week that I felt bad my first commentary of Speedweeks turned out as negative as it did last week. Racing is my escape, and escapes are short in supply for just about everyone in 2020. I want to be excited to be at the track.

Now, on Daytona 500 eve, writing at a picnic table staring out at the Daytona grandstands, I’m truly optimistic about where this season is headed.

If I’m still there after 500 miles tomorrow, race fans rejoice.