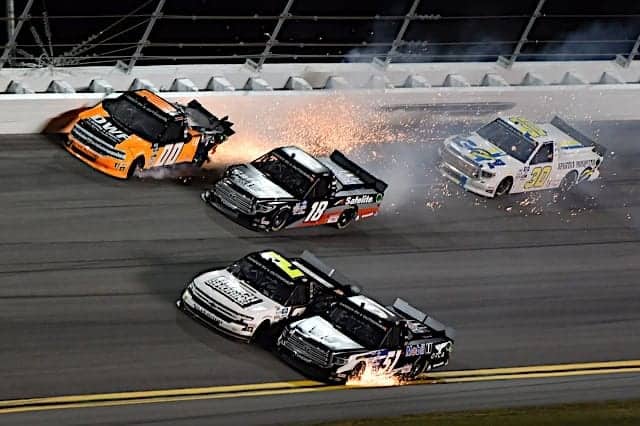 Fresh off a thrilling photo-finish that saw Grant Enfinger get physical to hold off a perfectly-timed challenge from underdog Jordan Anderson for the win at Daytona International Speedway, I reached the only logical conclusion driving back from the track early Saturday morning (Feb. 15).

Speedweeks goes through the same dog-and-pony show with the trucks at Daytona every year. The packs get really close together. The racing gets intense. The field wrecks. Repeat three-four times, and a winner pops out. This year, Enfinger saw his number come out of the carnage. Anderson got some deserved TV time, Codie Rohrbaugh and Derek Kraus got career-best finishes and Natalie Decker became the highest-finishing woman ever in a Truck Series race.

Rewind back a year ago. Austin Hill saw his number pop out of carnage that saw only nine trucks in a field of 32 actually finish the race, Spencer Boyd scored a then-career-best finish and Angela Ruch scored the then-second-highest finish for a woman in Truck Series history.

Let’s just take inventory of the situation here. Thanks to truck racing at Daytona, the record-holding woman for the series is a driver that literally couldn’t get pushed by a wrecker to pit road without spinning herself out. Thanks to truck racing at Daytona, a man named John King, that had our editor-in-chief at Frontstretch literally ask “who are you?” in a post-race presser, scored his “second career feature win …” in anything … at the World Center of Racing. Imagine if Kyle Busch had been in the field for that race … Garrett Smithley, eat your heart out.

It’s not like this is something that snuck up on anyone, as the Truck Series Daytona race has a long history of carnage. The very first such race back in 2000 was highly anticipated for marking the return of non-plate racing to the high banks. All that anyone remembers it for, however, is Geoffrey Bodine tearing down more walls than the fall of Soviet Russia, and fortunately, living to tell the tale.

However, the Truck Series race and the melee that it is has long gotten a free pass for two reasons. One, as mentioned above, Speedweeks gets touchy-feely stories about underdogs persevering when in fact most such finishers are the equivalent of blue-collar race fans winning the Powerball, complete with enthusiastic TV interviews (Anderson apparently was trending on Twitter Friday night).

Some days are pretty routine. Other days @j66anderson trends nationally. Today is the second kind of day. #NGROTS #NASCAR pic.twitter.com/Re95k3AOkU

Let’s be clear here, Anderson was not such a Powerball winner. His move on Enfinger in an attempt to win was timed perfectly, and had his No. 3 not momentarily slipped from under him after he pulled out to pass, it probably would have worked. Rohrbaugh, Kraus and Decker? They’re deciding whether to take their winnings in a lump sum or in a lifetime of installment payments.

Let’s talk about Anderson’s power move that nearly shook NASCAR racing. Friday night’s Truck race saw a number of astounding feats of driving, specifically with racers saving their vehicles from calamity in the draft. Be it 2018 Truck Series champion Brett Moffitt, rookie contender Raphael Lessard or race winner Enfinger, each driver had a world-class save on their resume by the end of 250-plus miles Friday. Even Todd Gilliland, whose reckless bump draft in the tri-oval on lap 16 saw Ty Majeski end up on his roof as a result, redeemed himself with an astounding save that saw him recover from being forced under the yellow line to the apron in the tri-oval inside of 10 to go … without collecting any victims. Save of the night goes to the No. 38 without question. All of this, while a largely inexperienced field had even the notorious Jim Utter (rightfully) impressed for much of the evening.

Incredible side-by-side racing by a lot of less experience drivers ??

Such efforts ended in complete futility, however, as Friday’s 250-miler will be defined not by those feats of driving, but for their end results. Majeski landing on his roof in turn 1. Johnny Sauter going a bump draft too far with teammate Ben Rhodes in turn 2 inside of five laps to go. And Ruch turning the race into an episode of what 2003 Truck champion Travis Kvapil dubbed “The Wruched Life” with an ill-advised, three-wide move that triggered the “Big One” on lap 68.

That Big One was highlighted at the end by Bryan Dauzat’s FDNY Racing Chevrolet ramming into the back of Tate Fogleman’s Chevrolet, already ablaze. For Dauzat, who told FOX’s Bob Pockrass that he was unable to stop for the wreck due to steering damage, it marked the second consecutive year of issues stopping — last year in the opening laps, Dauzat ran over a crew member with an apparent brake failure. Rationale for each incident or not, such occurrences are what one would expect to see in an ARCA Menards Series race. Ironically, it was an ARCA veteran himself who summed up the situation perfectly (though he clearly meant to say “can’t”).

Problem is, the Daytona ARCA race was a week ago. And the question has to be asked, does Speedweeks really need another one? Considering the ARCA field was more than a half-dozen cars short of a full field only last week and that a great number of the Truck Series field Friday could probably use time in an ARCA car, it’d seem to make more sense to have them racing on the first Saturday of Speedweeks rather than staging the same show as an encore in the bed of a truck. This Friday, the Trucks and the display they put on couldn’t hold a candle to the Duels of Thursday night, flashes of brilliance notwithstanding.

Which brings us to that second reason the Truck Series race has gotten a free pass for all this time. For years, the story went that the best race of Speedweeks was run on Friday night. And the story held water, because for years the Cup packages at Daytona were not that great. Again, let’s go back to 2000. The same year that the Trucks were the talk of Speedweeks, the plate package the Cup Series ran put on an absolute snoozer of a 500, one that saw Jeff Gordon’s car, the one the sanctioning body itself sponsored (no conflict of interest there) behind the wall first with mechanical trouble. An omen of things to come for 21st century NASCAR …

That’s not the case anymore. As was on display Thursday night, this year’s Cup cars are lightning fast, can pass nearly at will and put on 300 miles of intense racing without a major wreck to show for it. The Cup cars are truly the centerpiece of Speedweeks 2020.

Which leaves us to consider the Truck Series opener to be what it was … a glorified ARCA race that saw wrecks aplenty, sloppy pit work (Tanner Gray nearly spun himself out leaving his pit stall) and seemingly evergreen cautions, such as the nearly 10 laps it took to clean up after the lap 68 Big One.

If the Truck Series is going to be held up as part of the “big 3,” and not part of the ARCA Menards development ladder (pickups and Menards are a seeming glove fit), The Wruched Life is not a desirable pilot episode for the season.

The infield of the Daytona International Speedway, and the campgrounds surrounding it, are chock full of pickup trucks. That’s where they should stay for Speedweeks.

Trucks on mile & under tracks, primarily.

Bring Trucks back to IRP/Lucas Oil Raceway, and go to Nashville Fairgrounds

Add Truck races at Springfield or DuQuoin (or both) on dirt – ARCA races their top series at both of these tracks.

Race at places that are where they came from, like Kern Co (Bakersfield) 1/2 mile, that replaced Mesa Marin

There’s room in the schedule to fit these – just drop the Super(stupid)speedway dates.

You are trying to compare the college football championship with the Super Bowl. I, like most fans I talk to, like the truck race right where it is and after all it is about us fans.

You are an Idiot.