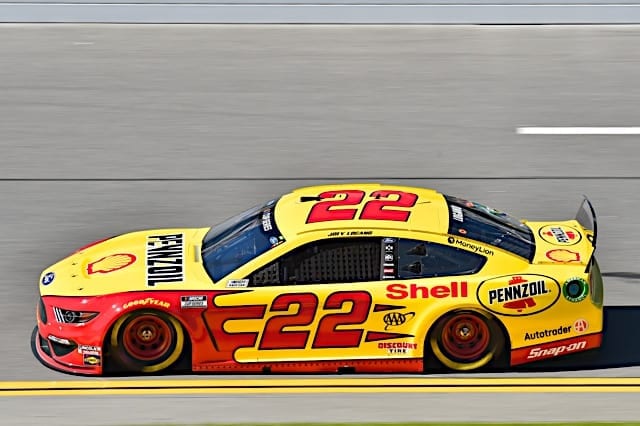 Joey Logano led a line of Fords to the top of the speed charts in Saturday’s (Feb. 15) Happy Hour practice for the Daytona 500, capping an uneventful final practice that saw only the Blue Ovals engage in any extended drafting. Twenty-six of the 40 starters for Sunday’s 500 made laps during the session.

Notable among the teams that sat out the Saturday session were the Toyotas of Joe Gibbs Racing and Leavine Family Racing, who after proving stout in the draft both during Friday practice and Thursday Duels, seem to be happy with their package for Sunday’s race. Polesitter Ricky Stenhouse Jr. also sat out the final practice and was seen in the garage in street clothes signing autographs.

Notable in the Ford camp, Brad Keselowski, who struggled in Friday’s practice and even lost the draft at one point, reported about midway through Happy Hour that the handle of his Mustang was still not where he wanted it. That was the exception rather than the norm in the Ford camp, with Logano, Aric Almirola and Clint Bowyer all satisfied with their entries.

A couple of minor issues dotted a few other teams’ sessions. Alex Bowman identified a radio issue at a specific point on the backstretch that the team was unable to identify; the team could hear the driver but the driver couldn’t hear them. Also of note was BJ McLeod; his No. 52 looks much sharper than it did Thursday, with sponsorship from Christensen Arms. But the team also had a major brake issue that required brake bleeding before Sunday, McLeod informed the team. On the sponsorship front, Reed Sorenson has picked up additional sponsorship decals since Thursday’s Duels, but the hood and quarterpanels remained blank as of Saturday afternoon.