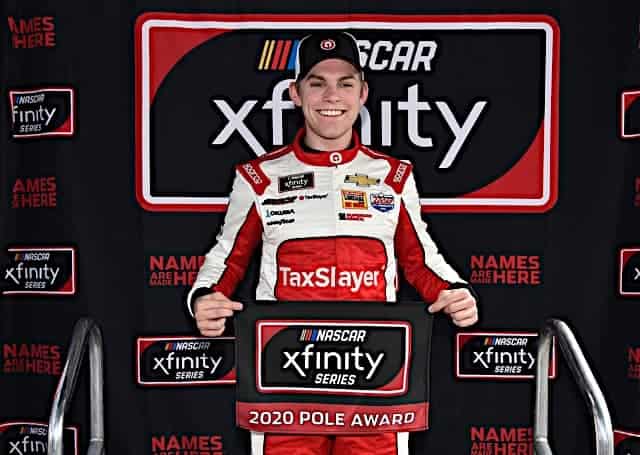 Myatt Snider won the pole for the NASCAR Xfinity Series season-opener at Daytona International Speedway on Saturday afternoon (Feb. 15) in what will be his first career Xfinity start.

Snider turned a speed of 188.43 miles per hour to win the pole in the No. 21 Richard Childress Racing Chevrolet — a car that will have a revolving door of drivers in 2020.

The main storyline surrounding Xfinity Series qualifying centered on Kaulig Racing. After the organization’s three cars crossed the finish line 1-2-3 in the most recent Xfinity Series race at Daytona (only for its No. 10 Chevrolet to be disqualified for failing post-race inspection), drivers AJ Allmendinger and Ross Chastain experienced issues during qualifying on Saturday.

.@RossChastain’s car has a fire underneath the hood after his qualifying lap.

Both @KauligRacing cars are well off the pace. #NASCAR

.@KauligRacing president @C_Rice1 believes the area of issue for its cars of @RossChastain and @AJDinger are centered around the brake or hub area.

There is concern with the 11 car of @Justin_Haley_ which has yet to qualify.

Allmendinger failed to qualify for the race. As for Chastain, the No. 10 Chevrolet failed to make the race, but Jeff Green and RSS Racing worked out a deal with Kaulig Racing and Chastain will drive the No. 38 Chevrolet instead. As a result of this change, Chastain will drop to the rear of the field for the start. The third Kaulig entry, driven by Justin Haley, did not have any gremlins during his qualifying attempt and will start third.

Additionally, there was an issue for the No. 66 MBM Motorsports Ford driven by Timmy Hill.

Upon approval by NASCAR, Hill completed his qualifying lap and will start 26th.

In addition to Snider on the pole, the rest of the top five are Michael Annett, Haley, Jeb Burton and rookie Joe Graf Jr.

Besides Chastain and Allmendinger, two other cars failed to qualify for the race today: Colin Garrett and Tommy Joe Martins.

The NASCAR Racing Experience 300 is scheduled to begin later Saturday at 2:30 p.m. ET with TV coverage provided by FOX Sports 1.