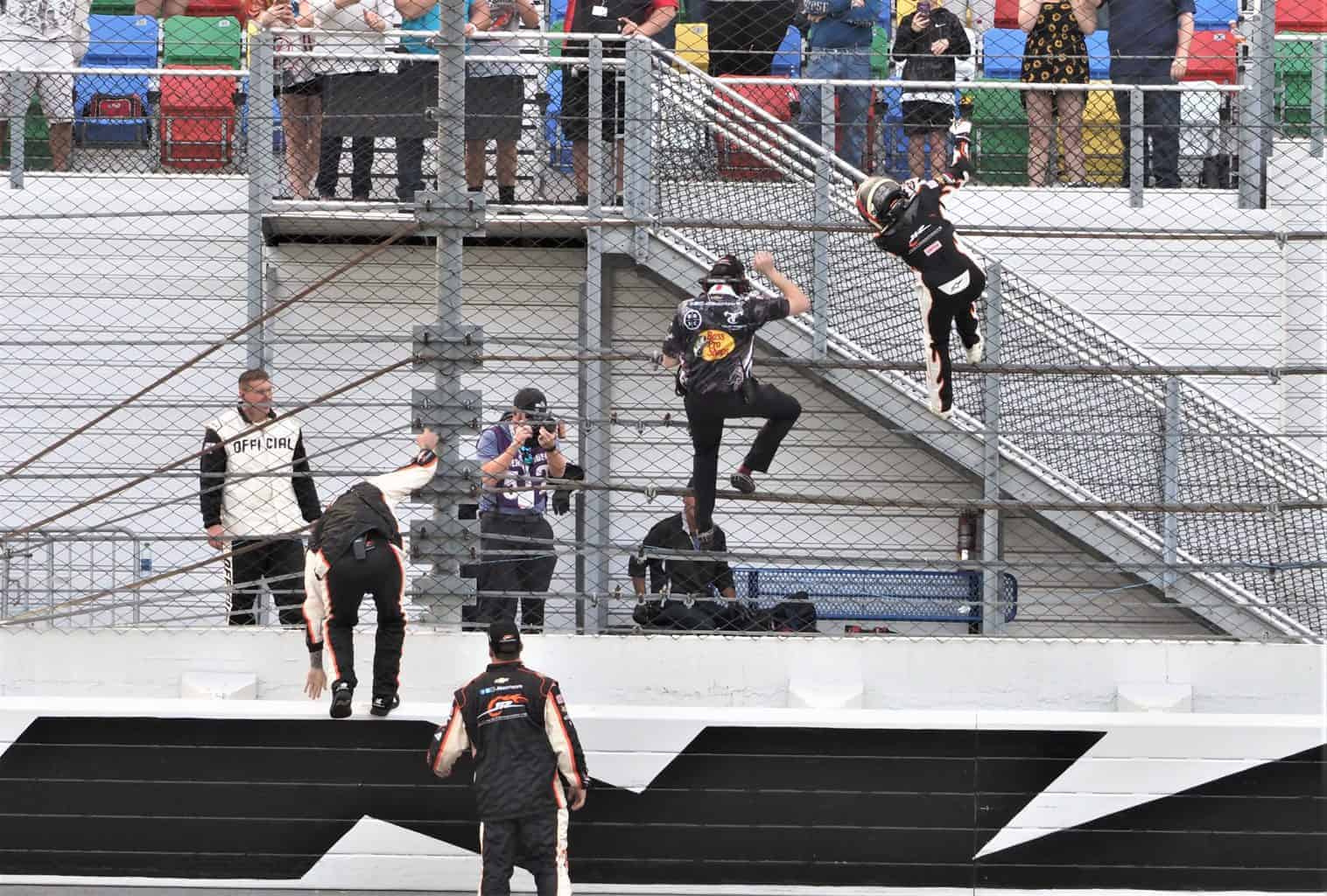 Noah Gragson took his lumps during a winless rookie season in the NASCAR Xfinity Series. But it took just one race at Daytona International Speedway to ensure that wouldn’t become a sophomore slump.

Gragson’s first NXS win came in Saturday’s (Feb. 15) 2020 NASCAR Experience 300 at Daytona. He took the checkered flag under caution when a late wreck behind him involving last year’s winner Michael Annett developed on the backstretch behind him. The incident kept Harrison Burton and a surprising Timmy Hill from making a late charge in their Toyotas for victory.

It’s the second straight year JR Motorsports has won the season-opening race. And, like Annett the year before, it was a redemption story for a driver who struggled at points during his rookie year before an offseason reset left him charging out of the gate.

“I’m speechless right now,” Gragson said. “I didn’t think this would come. I spent a lot of time with Dale Earnhardt Jr. this week, wanted to be a better speedway racer. He said ‘wreckers or checkers, you’ve got to manage your gaps and just go lead the damn thing.’ So that’s what we did.

“Just tried to work all race long managing how far in front of the car behind me I got. If it weren’t for this Hendrick [Motorsports] power, I don’t think we would have been able to get to victory lane.”

Gragson didn’t get out front until the final stage, fighting through the pack after a pit road speeding penalty cost him track position after stage one. But once ahead in clean air, the No. 9 Chevrolet seemed to shine with a blocking partner behind him much of the day in teammate Jeb Burton.

Once Burton was eliminated, a victim of the day’s biggest wreck, Gragson had to hold off Chase Briscoe after his No. 98 Ford initially took the lead on the final restart. Ultimately, the Briscoe couldn’t find the right dancing partners down the stretch in a pack where he was the only Ford team left on the lead lap.

“That’s going to sting for awhile,” Briscoe said after fading to fifth. “I felt we were making more moves than anybody and we were going to have a shot at the end.”

Instead, it was the 1-2 punch of Burton and Hill that hooked up for a last-ditch effort. It was the best career NXS finish for both drivers, both of whom stayed near the front much of the race.

“Not as great as it could have been, which is unfortunate,” Burton said. “I wish I could have won it. Proud of our guys, proud of our hard work.”

For Hill, the performance continued a dream Speedweeks that includes his first Daytona 500 start tomorrow. It’s the best finish for him at any of NASCAR’s top three levels in a career that dates back to 2011.

“We always bring a really good piece to Daytona and Talladega [Superspeedway],” Hill said. “It showed all day today. Just ran out of time. Just been an incredible weekend, can’t wait for tomorrow.”

Those were the only drivers to finish on the lead lap in a race that had its fair share of carnage. Four wrecks in total eliminated many of the top contenders and caused a few tempers to flare. In particular, Joe Graf Jr. and Austin Hill had a difference of opinion after both got involved in the day’s first wreck off turn 4.

That was a BIG hit for Joe Graf Jr. in Daytona pic.twitter.com/SjxBRkLEOM

“I don’t know if the No. 08 knows how to use the brake pedal,” Hill said of Graf. “But he certainly wasn’t using it.”

“Well, I definitely checked up for the wreck,” Graf responded. “I thought we made it through. Austin [Hill] just turned down into our door and wrecked both of us.”

For a time, it looked like that would be the day’s biggest wreck as the final stage spread out the field. Different pit strategies led to Alex Labbe of DGM Racing leading the field for an extended period; by the time he and other backmarkers pitted, the lead pack was reduced to a half-dozen cars.

But then Josh Bilicki lost a tire, spinning out and collecting Jeremy Clements and Justin Allgaier in the melee. It left the field bunched up for maximum aggression on a restart with seven laps remaining.

It was then that the day’s biggest wreck unfolded, a 13-car incident on lap 115 that scrambled the field heading to the finish. An ill-timed bump from Austin Cindric on the backstretch sent Burton spinning and collected most of the lead pack behind him.

“I guess Brad [Keselowski] can teach his Ford Xfinity teams how to block as well,” Brett Moffitt joked after being collected. “Since he didn’t like how Joey [Logano] was blocking.”

The NXS now heads to Las Vegas Motor Speedway for its second race on the schedule, the Boyd Gaming 300. Coverage begins at 3:30 p.m. ET on FOX Sports 1.

This story will be updated. Bryan Nolen contributed to this report.