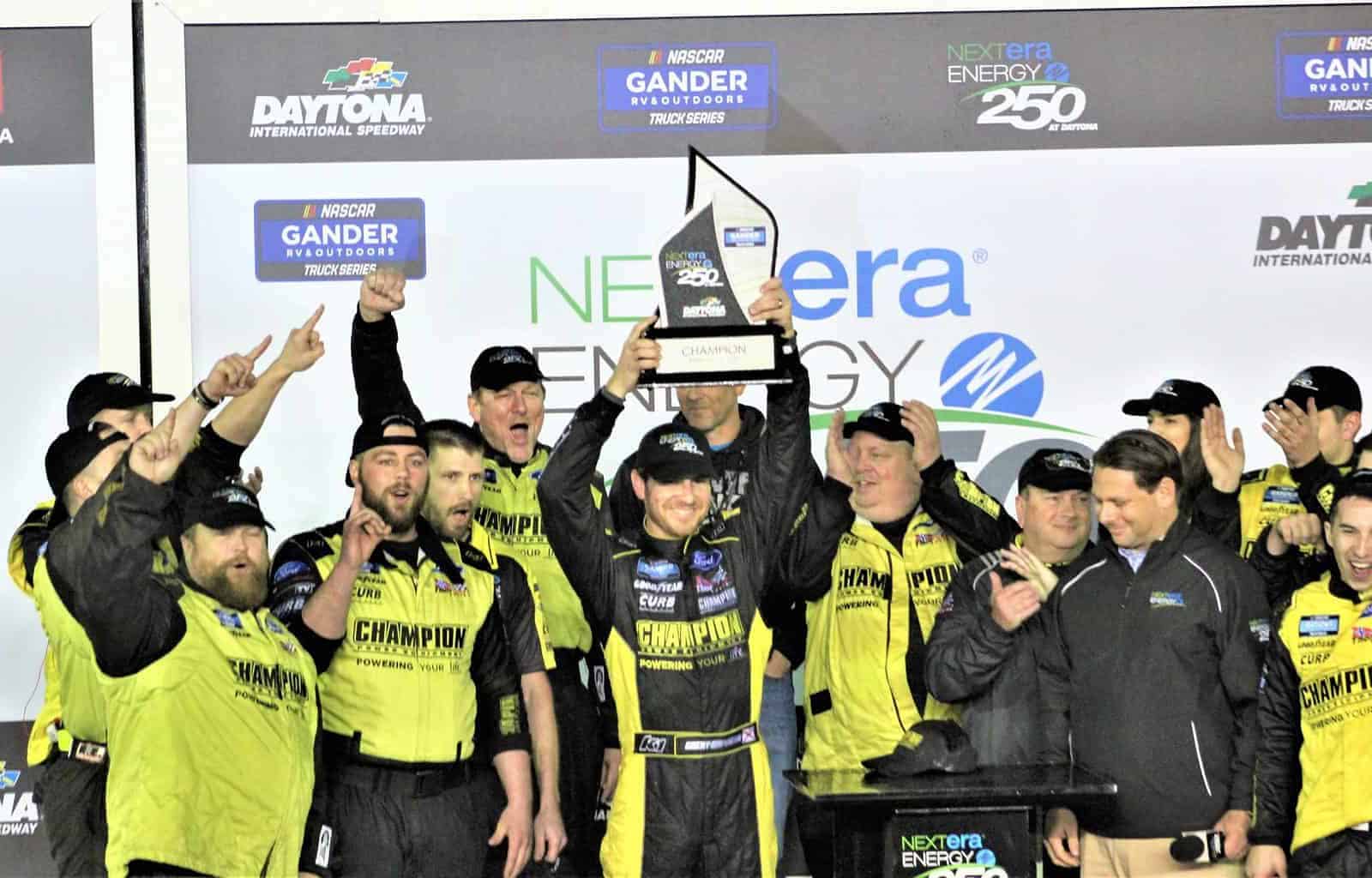 In a Nutshell: Grant Enfinger scored his third career win with a photo finish alongside Jordan Anderson in Friday night’s (Feb. 14) NASCAR Gander RV & Outdoors Truck Series race at Daytona International Speedway. A late-race caution with just two laps to go forced an overtime finish, causing the driver of the No. 98 Ford to fight hard for his first win since September 2018 at Las Vegas Motor Speedway. Enfinger prevailed by a mere 0.010 seconds in closest finish in Daytona Truck Series history.

Sauter is no stranger to Victory Lane at Daytona. In fact, he has three wins since 2013, so a seventh-place finish Friday night sounds like a bit of a disappointment for the Truck Series veteran. And while he would have preferred to be the ThorSport Racing driver celebrating in victory lane, he still smiled while talking about the speed in the No. 13 Ford.

After starting fifth, Sauter remained there throughout the entirety of stage one as most of the top 10 just ran single-file in the first 20 laps. A pit road miscue under the stage break caution, one that saw him miss his stall, dropped Sauter right through the running order.

“I didn’t know they changed the pit sign,” Sauter explained after the race. “I was looking for my last year’s one and it wasn’t there.”

Confusion for Johnny Sauter costs him multiple spots in pits. Didn't understand what his pit sign was.

"You know the big thing that says 1-3 on it, you've got to have it over the wall."
"You don't have that anymore. You have the horse." – @JohnnySauter radio#NASCAR #NextEra250

To add insult to injury, under the stage two caution, Sauter’s team was hit with an uncontrolled tire violation when one of the Goodyears that came off his truck rolled out into the frontstretch grass. He recovered once again, pushing through the pack into the final stage and jostling for position in one of the three-abreast lines as the laps wound down.

Sauter was pushing teammate Ben Rhodes at the front of the field, smack in the middle of a three-wide battle, when all hell broke loose.

The wreck collected around a dozen trucks, including three of the four ThorSport Racing teammates in Sauter, Rhodes and Matt Crafton. It marked the third Big One of the night but easily the most impactful. Sauter and Crafton were able to continue, though Rhodes retired on the spot, along with Tyler Ankrum, Gus Dean, Jesse Little and Tanner Gray.

“We were stuck there in the middle and the (No.) 99 (Ben Rhodes) is obviously a teammate, and I was doing everything I could to try to give him a boost,” Sauter said. “He had a great truck and I don’t think I turned him. I feel like I gave him a little boost and gave us a little daylight there and he looked like he was loose. It’s just a racing deal; I’m sure he’s ticked or whatever, but it was not on purpose.

“We were actually in a position to push the [No.] 99 to the win and just didn’t get there.”

For Sauter, it’s a better start to his 2020 campaign than the 23rd-place run that saw him crashed out of the season opener last year just past its halfway point. And while one race does not make or break a driver’s season, any kind of momentum, whether positive or negative, has more of an impact than many will admit.

While Grant Enfinger was busy celebrating his win, the remainder of the top five had their own celebrating to do.

Natalie Decker’s record-setting fifth-place run is the highest for any female driver in Truck Series history. That bests the sixth-place finish that Jennifer Jo Cobb achieved back in 2011.

“It’s amazing, I’m so thankful. N29 has been with me since the beginning,” Decker said following the race. “I’m so happy that I got to have my best finish here with Niece [Motorsports] and that’s just so wonderful.

“We were riding around in the back but that was [Niece’s] plan and I just had to, ride but it was so worth it those last two laps, being able to race up front there and get a good finish.”

And while Decker has the backing of Niece, an organization that officially won three times with Chastain last season, the other three drivers that made up the top five come from drastically different teams.

A little further up the running order, Jordan Anderson’s runner-up finish beats his prior career best, set at Talladega Superspeedway in 2018. But perhaps what’s more important for the owner/driver is that he had to “move some money around” during the offseason just to make this race happen for his team. To see Anderson’s reaction to his finish post-race, you’d think he was the one headed to Victory Lane.

“I’m almost speechless for words,” Anderson explained. “You know me, I’m usually not speechless. God is good. You look at our race team and opportunities we’ve had. And it’s just because people have come in and believed what we’re doing and what we’re trying to do. And God’s put the right people in our path.”

Just one spot behind him was Codie Rohrbaugh, who slid sideways earlier in the race but was able to save his truck and continue on. Otherwise avoiding trouble throughout the night, the driver of the No. 9 Chevrolet came within several feet of scoring a huge upset victory, something that would have been a major shot in the arm for the underfunded team.

“The guys really tightened it up. They did a really good job on a couple of pit stops,” Rohrbaugh explained on pit road with a smile on his face. “The guys just worked their tails off all race. They never gave up. We were just half a truck length from winning at Daytona.

“It gives us a lot of momentum going into Vegas. We will just ride the momentum to Vegas and see where it takes us.”

Meanwhile, Derek Kraus, who just recently announced a planned full-time schedule with McAnally-Hilgermann Racing, ended up fourth. With just five prior starts under his belt, the driver of the No. 19 Toyota had very little drafting experience, so the goal for Friday was simple.

“Just try to finish,” he said Thursday at Daytona. “If we are there at the end of the race, I feel like we will get a good finish.”

Not only did Kraus end up completing all of the laps, he also came home with an impressive fourth-place result.

On paper, a top-five performance for Kraus is impressive, but the record books won’t tell the whole story of the rookie’s night. After starting 16th, he jumped inside the top 10 before making an unscheduled pit stop halfway through stage one for a vibration. Recovering from that, Kraus once again dropped through the field, this time for speeding on pit road at the end of stage two. But he kept the fenders on the No. 19 Toyota and was around at the end to capitalize on a two-lap dash to the finish.

“I learned a lot. Coming into this race, I really didn’t have any drafting experience at all so we learned a lot in practice,” Kraus explained. “I’m really happy with this. It was our first top five in our rookie season. I am really looking forward to this season with our Bill McAnally Racing crew and everybody at BMR that works hard on these race cars. I just can’t thank everybody enough.”

Daytona – and superspeedway racing, in general – has often been called the great equalizer and a chance for those that may not normally be able to compete with top-tier organizations aerodynamically to shine. That’s exactly what they did at Daytona this time around in what became a historic night for these teams and drivers.

“It’s looking like we’re probably going to be able to do Talladega, and I think Charlotte will be the one we work on after that.”

Those starts will be with Hill’s No. 56. Despite the wrecked truck, Dean was just happy to have run at Daytona considering how last minute the deal came together.

“About a month ago, that truck was two frame rails sitting on a fab table,” he explained. “So the guys really pulled it through for me, worked hard to give me a fast truck. It was like a warm knife through butter, it cut right up through the field just like I wanted it to. Just unfortunate cause my guys worked so hard.”

Some not so kind words for Austin Wayne Self on the 45 radio. Heard something about AWS going out and playing Halloween race car driver every Friday and Saturday night. Needless to say, there's no love lost there. #NASCAR #NextEraEnergy250

Rookie of the Race: Kraus

Points Update: Grant Enfinger walks away from Daytona with a win in his pocket that also gives him a playoff bid, assuming the series sees no more than 10 victors this season. He also holds an 11-point edge over Austin Hill. Johnny Sauter sits three points back in third, while Jordan Anderson and Codie Rohrbaugh round out the top five.

Up Next: The Gander RV & Outdoors Truck Series heads west to Las Vegas Motor Speedway next weekend for the Strat 200. Coverage begins a 9 p.m. ET Friday, Feb. 21 on Fox Sports 1; the race can also be heard on your local MRN affiliate and SiriusXM NASCAR Channel 90.