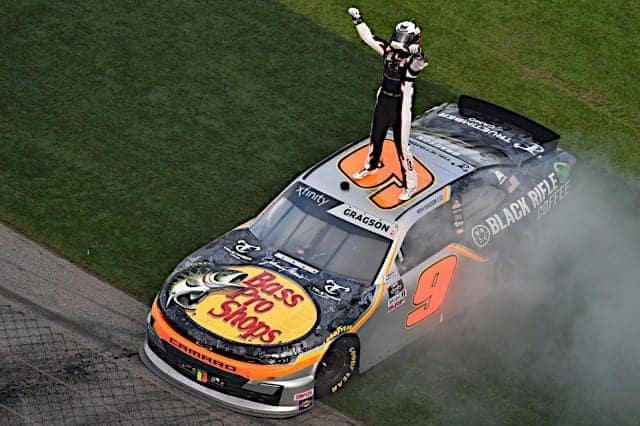 Last year’s NASCAR Xfinity Series opener was horrendous with a single-file parade around the top. Saturday’s (Feb. 15) NASCAR Racing Experience 300 at Daytona International Speedway was anything but, as it was action packed throughout the event. Come the end, it was first-time winner Noah Gragson celebrating on the famed track’s frontstretch.

The opening two stages of the event were thrilling, often having side-by-side racing while staying green for the most part. At the end of the opening stage, Jeb Burton was out front.

JR Motorsports continued to dominate the second stage, as Justin Allgaier went onto earn the playoff point. On the final lap there was a three-car pileup, started when Riley Herbst was turned by Josh Williams.

Gragson led most of the second half of the race, often pacing a six-car parade following pit stops with just shy of 40 laps remaining. But over the course of the final 13 laps three cautions occurred, including a pileup on the backstretch of the final lap. When the caution flew, the No. 9 car was ahead, earning Gragson his first NASCAR victory in nearly two years (May 2018 at Kansas Speedway in Trucks).

When superspeedway racing is good, it’s usually really good. And I enjoyed the hell out of the Xfinity race.

It had the perfect mix of intensity and clean racing. At the end of each of the stages, you could feel the intensity pick up, as two of the stages ended under caution.

In the opening stage Jeb Burton and Myatt Snider dominated. While the No. 8 Chevrolet earned the stage victory, his three JR Motorsports teammates swept the rest of the top four position.

Early in the second stage, Michael Annett spun, triggering a three-car crash. When the race restarted, it was side-by-side racing, and Chase Briscoe in particular making moved to the front. On the last lap of the stage, Justin Haley was getting a shove from behind, making it to second. Had the caution not come out for a turn three incident, the No. 11 Chevrolet may have earned a playoff point.

Who knows what would have happened had the caution not flown on the backstretch on the final lap.

Kaulig Racing entered the 2019 guns ablaze on winning the Xfinity Series championship by adding a second car to its driver lineup with proven driver Ross Chastain. But come Saturday morning, the team could only put one car into the show, as both Chastain and AJ Allmendinger had brake problems, putting up the slowest two times in the session.

Based on the rulebook, in order to receive a provisional in Xfinity, a driver/team must have run all of the Xfinity races the year prior, which is what made Chastain ineligible for a provisional to make the show.

Instead of not racing at all, Kaulig bought out the No. 38 car at RSS Racing and Jeff Green, who only had three scheduled races for 2020. Over the next two hours (noon- 2 p.m.), it was all-hands-on-deck to get the No. 38 wrapped in Nutrien Ag Solutions colors.

Though the No. 10 team will not get owner points for running the No. 38, it allowed Chastain — who is competing for the drivers’s title — to run the race and get points.

After starting in the rear, Chastain finished 22nd while earning three stage points in the second stage.

While neither Chastain or Allmendinger made the show — and they were two of the favorite prior to qualifying — Justin Haley turned the third quickest time, having one of the best cars during the race.

He doesn’t believe that the struggles Kaulig Racing faced hindered the No. 11 team, rather it was the lack of support from other Chevrolet teams.

“We focused on our own deal and did our own thing,” Haley said post-race. “There was really nothing we could have done. I think the only thing that set me behind was I didn’t have anybody to work with all day. It was just me out there, which is a big struggle.”

For Chastain, there shouldn’t be an issue of making another race this season. Meanwhile, Allmendinger isn’t scheduled to be back behind the wheel until late April at Talladega Superspeedway.

For a relatively clean race, it took a turn for the worse over the final 13 laps. On a late-race restart, Chase Briscoe grabbed the lead from Noah Gragson and went up to block the No. 9 car at the last moment. While Briscoe saved his car, Austin Cindric drove into the rear of Jeb Burton, causing a 13-car wreck.

In theory, Cindric’s bump to Burton was what caused the wreck. However, it was a block from Briscoe that started the accordion effect. But the Stewart-Haas Racing driver says all gloves are off with less then five laps to go.

“I think it’s all out the window with five laps to go,” he said. Everybody is going to do whatever they can to Daytona. I could have wrecked but at the same time I could have won the race. He did what he had to do, I did what I had to do. It was fun racing.”

Beginning at the front of the field, this wreck goes to show there’s no perfect place to be for the Big One.

Per usual, the underdogs come to play in superspeedway racing. Daytona was no different.

Timmy Hill earned his best NASCAR finish in his 310th career start. The No. 66 MBM Toyota was a factor throughout the event, finishing 18th in the first stage and 17th in stage two, though spent time inside the top 10.

But when the pay window opened, Hill was dodging wrecks, recording his fourth top-10 finish at Daytona.

“For me, personally, getting that third is really special to continue building on my career,” Hill said. “I don’t want to be known as the guy who finished fifth, I want to get some wins one day. It’s very tough in the situation I’m in.

“Carl Long and MBM put this effort into Daytona — for them to continue to believe in me when nobody else really does is special. I love showing people wrong and this week is another case of that.”

Long also stated he “definitely” believes he could have won on the last lap had the race ended under green. The third-place effort is also a career-best for MBM in 329 series starts.

Luckily for the team, it got a good pay day, as earlier on in the day, NASCAR found improper body modifications with body filler on the nose of the No. 66 Toyota. Hill’s crew chief, Sebastion Laforge is suspended for six weeks, fined $50,000 and docked 75 points. The team will not appeal.

“At this point, it’s just another finish,” Black said of a setting a personal best result. “For my guys, it’s a big day. I want to get better and keep improving. We put ECR motors in this weekend and for all the [superspeedway] races and they deserve it more than anybody. I’m excited for them. I’m going to party tonight, that’s for sure.

How is Black going to celebrate, you ask? Though he’s typically a Crown Royal guy, it’ll be a couple of brewski’s tonight.

Of the 36 starters for Sunday’s Daytona 500, just three of them competed in the Xfinity event. Timmy Hill led the way in third, earning his first career top-five finish.

Behind him was BJ McLeod, placing 13th in the finishing order for JD Motorsports. The aforementioned Chastain finished 22nd with RSS Racing.

“Noah [Gragson] got out front about a car and a half and I thought ‘He might be in trouble here’, but then the caution came out. – Harrison Burton

“That one is going to sting for awhile for sure. I feel like we were making more moves than anybody and I thought I was going to have a really good shot there at the end.” – Chase Briscoe

Two thumbs up from me for this Xfinity action at Daytona. There were major storylines that began before the green flag waived and continued all the way until the checkered flag flew.

The victory for Gragson should give him momentum, especially coming off 2019, where he was consistently finishing sixth to 10th. He also becomes the fifth JR Motorsports driver to win the season opener over the past seven years (Regan Smith: 2014, Chase Elliott: 2016, Tyler Reddick: 2018 and Michael Annett: 2019).