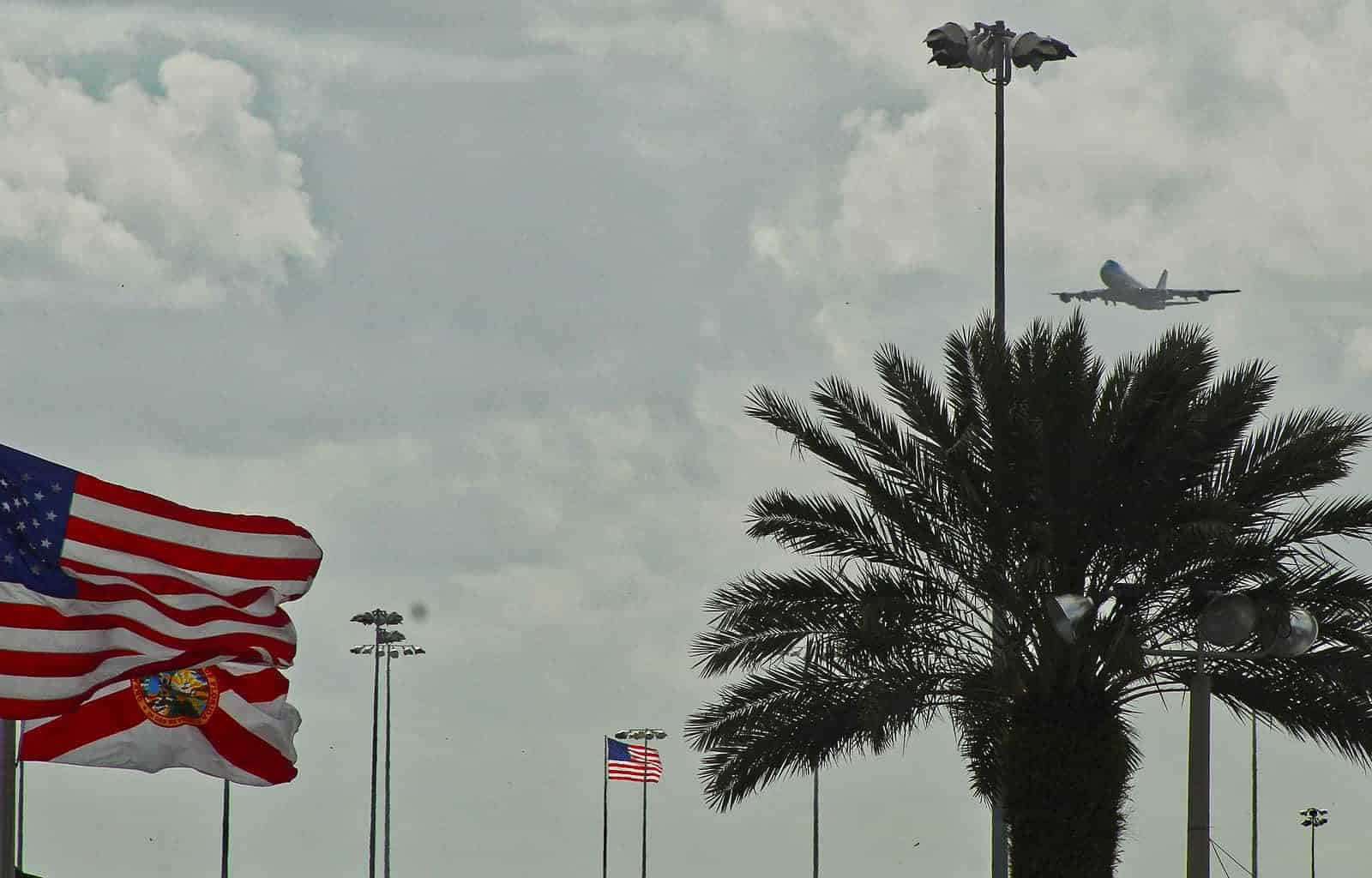 For the first time since 2004, the President of the United States has attended a NASCAR event. President Donald Trump landed at Daytona Beach International Airport, then drove his motorcade on the racetrack before addressing the crowd and giving the command to start engines for the 62nd annual Daytona 500.

Trump’s Air Force One brought shadows over 2.5-mile Daytona International Speedway as it descended to land just across the street.

After landing, Trump and his motorcade entered the racetrack between turns 1 and 2, eventually doing a lap around Daytona’s high banks. Trump then emerged on stage around 2:30 p.m. ET with wife Melania to address the crowd with a short speech.

“NASCAR fans never forget,” Trump said. “That no matter who wins the race, what matters most is God, family and country.”

Trump then introduced Gold Star Families that were in attendance before turning his attention to the race itself.

“Soon, the Great American Race will begin,” Trump said. “For 500 heart-stopping miles, these competitors will chase the checkered flag, fight for the Harley J. Earl trophy and fight for pure American glory. Good luck, and may the best team win.”

Later, Trump was interviewed by FOX Sports’ Jamie Little where he explained what he loved about the sport, claiming it was his fifth time attending the Great American Race.

“It’s really the bravery of these people,” he said before joking around. “It takes great courage, the speed, the technology…. I think I’m going to hop into one of these cars and get into this race, if possible.”

From there, pre-race ceremonies resumed, concluding with Trump giving the traditional racing command to start engines.

"Daytona International Speedway, we love our country and it's truly an honor to be with you at the Great American Race. Gentlemen, start your engines!" #NASCAR #DAYTONA500 @realDonaldTrump

Paired with a second flyover of the @AFThunderbirds.

Trump then led the field in his limousine, nicknamed the Beast before exiting the track shortly before the green flag in his motorcade.

The sport gave the President a warm welcome although extra security resulted in long lines to get into the infield and other track areas along the midway. The FanZone still filled up despite waits of up to two hours. Several fans in the crowd wore special Trump/Pence 2020 shirts and MAGA hats, also writing supportive messages to the President on Daytona’s asphalt.

With necessary-but-epic security for President Trump's visit, folks going into the Daytona infield fanzone have been facing two-hour lines today.

➖ @TalladegaSuperS President Brian Crichton led a group of several @NASCAR employees who were out there handing out water to fans. pic.twitter.com/nDIgYNxRgO

NASCAR rising star Hailee Deegan, meanwhile looked to snag an autograph from Trump. After going back and forth with Donald Trump Jr. on Twitter, she was never shown meeting the President himself but wound up with her wish fulfilled by the drop of the green flag.

I laughed when FOX cut away from the windbag liars speech. He got in his plane and flew away. I’m sure he will be whining to the Murdoch’s. Hilarious for sure. Fox didn’t have much to say about the fool when his plane flew in either.

What are you even talking about? What has Trump lied about? I’m guessing based on your comments you’re a liberal. So you’re ok with liars normally right? Obama lying about insurance and health care (if you like your doctor you can keep them), lying about giving Iran cart blanc on acquiring nuclear weapons, sending cash to them by the pallet load, and holding illegal aliens in concentration style camps while separating kids from families and splitting families up. Obama is the reason people can’t get hired on full time now, due to his EO’s and rushed laws that made companies less likely to hire people on full time and they are rewarded for hiring part timers who have to pay money out of pocket for mandated insurance which they can barely afford. All of that is ok by you right? Or how about Hillary Clinton directly impeding assistance to our own Ambassador and staff at an embassy which resulted in the vicious rape, mutilation and eventual death after torture of our Ambassador. Causing the death of several highly trained men who attempted to defend and safe guard the Ambassador. Lied to Congress and really didn’t show any concern or remorse. Set up her own server that was illegal, and resulted in tons of TS material being stolen by Chinese and a Russian hackers, then she lied about the server status and personally destroyed data under subpoena and order the physical destruction of the storage devices to ensure she couldn’t be found out. You’re ok with those lies and betrayals of our country right?
Trump is working to make our country safer by restricting illegal immigration, removing and deporting illegals who commit crimes, endanger hurt and kill Americans. He’s grown the economy. He’s caused median income to rise after being in a down slope for years. You’re ok with America being forced into losing import/export agreements with countries, which directly impacts American stores and consumer negatively. And you’re crying and whining because now we are in import/export contracts that have a positive gain on our side. You’re ok with socialist and communist ideals, loss of civil liberties, destruction of civil rights and constitutional rights, but not ok with Americans maintaining their right to life, liberty and pursuit of happiness.
Damn man. I feel for you living in a country that you have so much hatred for. Maybe you could remove emotional bias, take a realistic look at things personally and not a spoon fed slanted propaganda based view from Democrats and find peace and happiness in our strong and wonderful society. Hope things get better for you so you can live daily with no anger and hatred and negative energy beating you down.

Are you deranged, what hasn’t trump lied about. The fool has been a compulsive liar his whole life. What rock do you live under. Soon your food stamps will be gone along with your housing subsidy and you’ll be back living under that rock. When your family can’t feed itself you’ll realize what a fool you’ve been. Wake up and turn off fox, learn how to read. Good luck, your going to need it.

Not the place to talk politics unless you want to create a shit-storm. Frontstretch just reported what happened without much spin or political posturing. If you want to get into it Echo, I’m your huckleberry. But maybe we should just keep our opinions to ourselves and keep this website about racing.

lol no problem, I said what I wanted and still laughing about the commercial fox went to.

If it makes ya feel better NASCAR could invite Pelosi to the flag stand to tear up the green flag.

i liked seeing airforce 1 fly around the track.

i know of some folks there and they weren’t happy with security but it was all ok. they hadn’t purchased meet and greet tickets. several of those events were cancelled.

regardless of who is president, if they want to attend something, they come. broadcast had said he has attended races 4 other times as a “regular citizen”, i’m sure with perks we’d never get, but still it was ok.

I guess there is no place to escape politics anymore.

The connection makes sense. Nascar drives in circles and most politicians talk in circles.

Love or Hate our President, I thought the flyover in Air Force One was pretty cool – How many people actually get to see that plane regardless of who is in it? I never have. The lap around the track – I thought it was kinda neat a sitting President even thought of or wanted to do that. I didn’t hear him say anything overly political – pretty typical thanking of the military and admiration of the drivers. The one thing that would have made it totally awesome is if the First Lady would have been wearing a Kevin Harvick hat and a smile.