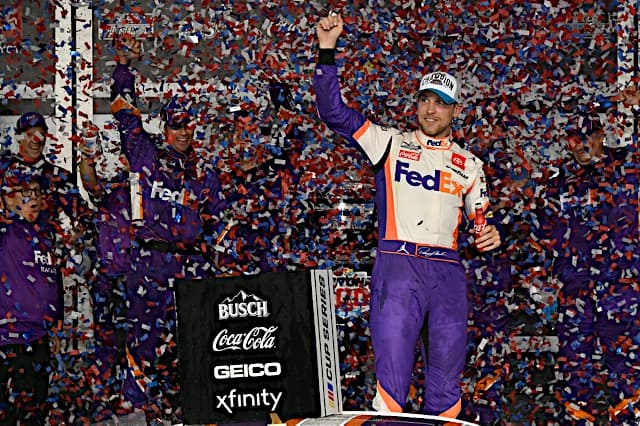 Denny Hamlin emerged victorious in a Daytona 500 that featured a rain postponement and several massive crashes, including a violent wreck at the finish that sent Ryan Newman’s No. 6 tumbling in the NASCAR Cup Series.

Hamlin’s victory was his second straight in the season-opening event and third overall, having won three in the last five years.

The first Great American Race of the decade was 20 laps in Sunday afternoon when downpours began. The initial showers came during the pace laps prior to the start, following an appearance by the president at the track.

Once the green flag — flown by Dale Earnhardt Jr. — flew, polesitter Ricky Stenhouse Jr. jumped to the lead and was out front for 20 circuits before raindrops began again.

Those drops turned into showers that drenched the track over and over again, making the Air Titans’ drying work futile and postponing the race to Monday at 4 p.m.

When racing finally resumed, the lead swapped back and forth between Brad Keselowski and Aric Almirola. Chase Elliott’s No. 9 soon came into the mix with teammates Jimmie Johnson, Alex Bowman and William Byron in tow, but Hendrick Motorsports lost Byron before the end of the stage.

On lap 60, Stenhouse hooked Byron’s No. 24, sending the 22-year-old into the inside wall and ending his day, but teammate Elliott went on to win the first stage.

Joe Gibbs Racing’s four drivers, along with the Toyota-allied car of Christopher Bell, led a single-file line at the outset of stage two. After a caution on lap 91 for Quin Houff wrecking, pit stops and a restart, Hamlin stayed out front to win the second stage of the decade.

Elliott suffered a penalty when his car dragged the fuel can out of the pit box, which was subsequently hit by Martin Truex Jr., who did not recover as the rest of his JGR compatriots continued to run near the front.

Incidents began when the final cycle of pit stops got underway. Stenhouse spun after contact with Erik Jones, while Cole Custer had issues that ended his day.

Once the two packs meshed back together, the real chaos began. On lap 185, Joey Logano pushed Aric Almirola into Keselowski, who spun and triggered a 19-car pileup and an ensuing red flag. Johnson’s final Daytona 500 as a full-time driver ended in the grass of the Daytona backstretch, while Ryan Blaney and Truex were also among those involved. Simultaneously, Kyle Busch’s 15th attempt at the sport’s biggest event ended in plumes of smoke as his No. 18 Toyota expired.

A second red flag flew once the race restarted, caused by Ross Chastain and Ryan Preece making contact in turn 1. That accident collected Logano, Ty Dillon and several others, while the subsequent attempt at overtime saw Justin Haley, Clint Bowyer and Michael McDowell make contact, the latter two sliding through the infield grass.

The second attempt at overtime was the one that stuck. Denny Hamlin led Ryan Newman and Blaney, who teamed up to freight-train past the No. 11 on the inside. Hamlin then gave Blaney a shove, both going high before Blaney dove to pass Newman. Newman blocked, but the contact sent the No. 6 into the outside wall, the car flipping before being hit by Corey LaJoie.

Hamlin and Blaney drag-raced to the finish line, with Hamlin edging out a victory in the second-closest margin the race has ever seen.

Safety teams attended to Newman’s car, and the driver was taken to a local hospital. As of 10:05 p.m. ET, Newman was described in serious condition but with no life-threatening injuries, in a statement from Roush Fenway Racing read by NASCAR personnel.