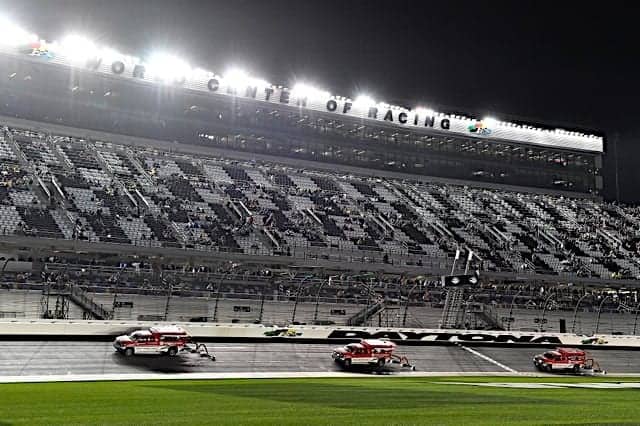 Ryan Newman was transported directly to a local hospital following a violent last lap crash in the Daytona 500 on Monday (Feb. 17).

At 10:05 p.m. ET, Newman was described as in serious condition with non life-threatening injuries at Halifax Medical Center in Daytona Beach, Fla.

On Tuesday morning at 11:51 a.m. ET, Roush Fenway Racing President Steve Newmark shared a statement on behalf of the team stating Newman remains at the hospital and the organization will provide more updates as they become available.

A statement read by NASCAR on behalf of Newman and Roush Fenway Racing is provided below.

Ford Performance also offered the following statement in support of Newman shortly after his condition was released.

“We’re grateful for the news about Ryan,” Mark Rushbrook, global director for Ford Performance Motorsports, said in a press statement. “We had been waiting for information just like everyone else, so to hear some positive news tonight is a relief. Ryan has been an important part of the Roush Fenway and Ford NASCAR program this past year, and he is so respected for being a great competitor by everyone in this sport.

“The entire Ford family is sending positive thoughts for his recovery, but our first thoughts remain with his family and team.”

Denny Hamlin was declared the Daytona 500 race winner after a last-lap pass at the start/finish line. Hamlin did donuts on the frontstretch, initially unaware of Newman’s condition but quickly turned somber upon hearing of the news. Hamlin’s spotter, Chris Lambert, explained the situation for the Daytona 500 winner in a series of posts.

First a foremost I want to give well wishes and prayers to @RyanJNewman. I had absolutely NO IDEA of the severity of the crash until I got to victory lane. There’s very little communication after the finish and i had already unhooked my radio. It’s not anyone’s fault. ?Rocket

1-For those hammering @dennyhamlin for his donuts,put the blame on me if u must blame anyone.I told him to slow down on backstretch & give the emergency staff time to roll,that we had a bad wreck.I saw DH get in line for lug nut check & assumed he was going straight to VL.

2- I then made a beeline down to Jason Jarrett to check on the status of Ryan. I did not communicate any more info to DH after that, because I was only concerned with finding out info on Ryan. That is 100% on me, and I’M EXTREMLY SORRY.

SUPPORT FOR RYAN NEWMAN POURS IN

This story will be updated throughout Tuesday (Feb. 18) as more information becomes available. Davey Segal has a video follow-up below based on Newman’s condition as of 10:30 p.m. ET Monday night.

An update on Ryan Newman from our @DaveyCenter, as he’s in serious condition with non-life threatening injuries.

Everyone at Frontstretch sends their thoughts and prayers to Newman and his family during this time. pic.twitter.com/JAHm53TpgB

I know. I have been hoping to see an update before I go to bed tonight. Perhaps no news is good news at this point.

timinchandler
Reply to  Bill B

The slow response time of emergency crews is appalling

Where were they slow? When dealing with someone who possibly could have major injuries to either the head or spine you have to be very cautious extracting and transporting the person. If they rush, they could further harm the individual. I thought they did a good job getting there considering there was also a pile up outside of turn 2, where most or all, the safety crew were likely headed prior to Newman’s wreck at the start finish line.

I was so glad to see that. Hope his injuries aren’t the long term life altering kind.

Oops, that reply was to Bill B…

i’m still upset……serious but non-life threatening. don’t like this.

Me, too Janice. We can all hope and pray that as each hour goes by, his chances improve.

We lost Dale 19 years ago today. Thankful we didn’t lose Ryan yesterday. Thoughts and prayers are with Ryan and his family for a full recovery.

i instantly thought of dale last night. i’ve always liked ryan, kind of like a modern-day kulwicki being a degreed engineer. then i thought about ernie irvan at michigan, and even when bobby allison was hurt all those years ago.

I’m hoping Ryan will be able to make an Irvan-like comeback and win again!

Jeremy – yes it was