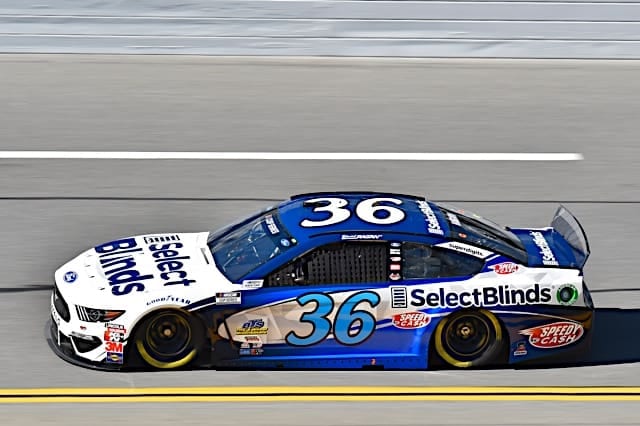 David Ragan said that he was looking forward to spending more time at home when he announced his retirement from full-time racing last fall. While he certainly didn’t mention running the Daytona 500, it remained a possibility. He’s probably glad it did, because Ragan scored his 16th career top-five finish in the NASCAR Cup Series by coming home fourth Monday night (Feb. 17).

Interesting enough, Ragan didn’t seem all that impressed after he emerged from his car.

“That was the ugliest fourth-place finish I have ever had.” Ragan said. “I wasn’t disciplined enough in my strategy there with about 15 to go. I felt like things were getting a little hairy and we were 16th or 18th and that is no man’s land here at Daytona. I keyed the radio up going down the back straightaway and said I was going to back off a little. That is when they wrecked. I was pretty mad at myself for not seeing that earlier and getting that damage. Our Front Row Motorsports team with Rick Ware did a good job getting it fixed up. Those last few laps were exciting.”

Such a result is remarkably more likely at superspeedway races like the Daytona 500 than most tracks, which is why many drivers can’t stay away. The crown jewel is so attainable, and I for one have a hard time believing any driver when they say they’re done at Daytona. I have to think Ragan might have the urge to try again to claim the Harley J Earl trophy.

Brendan Gaughan and Corey LaJoie both finished in the top 10, coming in seventh and eighth, respectively. Both rebounded after being involved in accidents but LaJoie had to overcome a scare early when his car initially wouldn’t re-fire following the red flag. However LaJoie, like many others, wasn’t in a celebratory mood post-race. His car was the one that made contact with Ryan Newman while the No. 6 Ford was upside down. LaJoie was visibly shaken following the race and expressed his concern for his fellow competitor.

“The narrative kind of changed a little bit. I heard [Newman] went straight to the hospital.” Lajoie said. “That’s obviously scary. I got a big push there that last coming to the white.  I don’t know who was pushing me and I kind of stalled out and I don’t know who hooked Newman. I was hoping he would kind of bounce off the fence to the left, but he didn’t and I hit him. I don’t know exactly where I hit him. I haven’t seen a replay. It was some scary stuff, don’t get me wrong. My car was on fire. My seat belts grabbed all sorts of areas, but it was a good day for us. I hope Ryan is OK.”

Timmy Hill enjoyed quite a week in Daytona. Not only did he qualify for his first Daytona 500, but Hill earned his best NASCAR on Saturday (Feb. 15) in the Xfinity Series race. The third-place showing bested his previous high by three spots, but there was something even more remarkable about the run. Hill probably could have finished there without the aid of the several accidents that took multiple cars out of contention. The No. 66 ran among the top 10 often and made all the right moves to stay out of trouble until the checkered flag. Joining Hill in the top 10 were Brandon Brown (seventh), Ray Black Jr. (eighth) and Alex Labbe (10th).

The Gander Outdoors Truck Series opener on Friday night (Feb. 14) was nearly an epic upset itself. Always one of the more underdog friendly events, this one featured longtime fan favorite Jordan Anderson coming within a fender of beating Grant Enfinger for the win. The runner-up finish certainly felt like a victory for the Columbia, S.C. native, as his previous career best was seventh at Talladega Superspeedway.

You can just feel the passion from @j66anderson.

Las Vegas Motor Speedway has been decidedly less accommodating for underdog drivers and teams than Daytona. The last such operation to earn a top-10 finish was AJ Allmendinger in March of 2015, when he drove the JTG Daugherty Racing No. 47 to a sixth-place result. While that team improved resources has resulted in them no longer being considered underdogs, there are still a few teams that could pull a surprise strong finish.

Corey LaJoie had a top 20 last year and the Go Fas Racing group has improved each year like clockwork. John Hunter Nemechek has only run four races in the Front Row Motorsports car but he has run well in those events. Also, Nemechek has won in both Truck and Xfinity cars on 1.5-mile tracks, similar to LVMS.

Vegas can’t come and go without at least a mention of John Wes Townley and his stunning 2015 Truck Series win there. Townley ran for Athenian Motorsports, a single-truck operation owned by his father, Tony. It wasn’t just that Townley hadn’t won prior to that night. He hadn’t even come close. He had only led five laps in his career prior to that race and struggled with some on-track incidents.

But that night Townley led three times for 24 laps and cruised to victory after retaking the lead late. Even as he closed in on the win, it seemed so improbable that one prominent media member even vowed that he would eat at Zaxby’s (Townley’s longtime sponsor) every day for a week if the driver held on to win.

As it turned out, both men held up their end of the bargain.

He hopes he has shown that he can be a good dance partner for the duration of the race.

"I told you guys I've had fast cars this weekend and I meant it."

Daytona!! So many emotions after that race last night. That finish was for every kid out there dreaming of one day racing at this level and for everyone that has been on this journey with us.

Everything in life happens for a reason. Never give up on chasing after your dreams! ?? pic.twitter.com/s0XsqoAgfC

I can put my brown paper bag away now. https://t.co/1E0VyiTM1i pic.twitter.com/62getf7sHr

The “CHER” of NASCAR. PFFTTT.