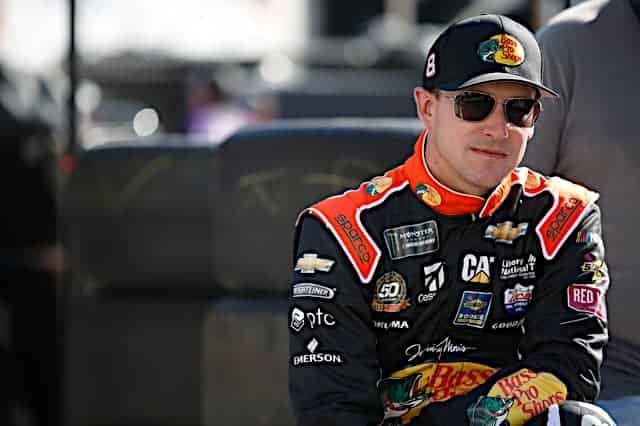 It’s not often you see a driver win the NASCAR Cup Series Sunoco Rookie of the Year Award and immediately drop back down to the lower divisions of the sport. But that’s what happened to Daniel Hemric for 2020.

And even though Hemric never won in three seasons combined between Xfinity and Cup with RCR, he was surprised he lost the seat of the No. 8 car.

“100%. I never embarked through 2019 with that being on the back of my mind that I was going to be in the situation that I was in eight to 10 months later,” Hemric recently told Frontstretch. “Extremely unfortunate, but I’ve also always been vocal about things happen for a reason and I found myself an opportunity with a fresh start and a new opportunity.

“I’m more ready than ever to make the most of it.”

While noting it would have been easy to “lay down” following the announcement in mid-September, Hemric chose not to. The results didn’t show, though, as his best finish over the final nine races of the season was a 12th in the season finale at Homestead-Miami Speedway.

Finding himself out of the Cup Series for a respected team wasn’t an ideal situation for Hemric, but he says it shows where the current climate of NASCAR lies.

“Just really goes to show you the state in which our sport is in and how mighty the dollar is,” Hemric said. “I made the decision to go the route I went for 2019 based off thinking when 2020 and beyond rolled around that I would have support with the organization I was with and it just didn’t quite fall the way we’d all hoped.

There were options on the table for Hemric following his departure from RCR. However, he elected to go the Xfinity route and join JR Motorsports for 21 races in 2020.

Other current NASCAR drivers such as Corey LaJoie have been vocal about why it’s important to be in the Cup Series and prove yourself in mid-tier equipment. For Hemric, his desire to compete for wins is one of the reasons why he chose to return to Xfinity.

“When I found myself in the situation that I was in back in the fall at Richmond, that was a question I had to ask myself: Where do I stand at?'” Hemric stated. “Do I want to go take one of these opportunities to still run mid-pack in a Cup car at best on your best weekend? Or do I want to try to build the stock, place myself if the opportunity is there to win races and compete for an owner’s title with JRM like we ultimately decided to do as a group?

“Trying to have the opportunity to go win races has far outweighed running 25th every week. Very satisfied with my decision, now I’ve got to go make the most of it.”

In his first Xfinity stint, Hemric proved to be competitive with RCR. Though never winning a race, he has 23 top-five finishes and 39 top 10s in 66 career starts, making two Championship 4 appearances with a best result of third in 2018.

Proving he can compete for a championship before, running the entire schedule wasn’t the end all, be all for Hemric. Instead, he’ll be sharing the No. 8 Chevrolet with Jeb Burton and team owner Dale Earnhardt Jr. to chase after an owner’s title.

“There were opportunities over the last two to three months of doing some fill-in races here and there, and it was brought up,” Hemric said of running a full season. “We thought about it and no matter what, someone is going to be spending some sort of money to make that happen. It felt best for, ‘You know what, let’s take our 21 opportunities and lets go do everything we can to maximize those opportunities and not put ourselves in a situation where any funding, if there’s any left over, let’s not use it just to implement ourselves for being in a car just to be in a car for the other 12 races.'”

And even though he now brings Cup experience to the table in Xfinity, Hemric doesn’t believe he has to win, though his expectations are rather high.

“I’m not going to say have to win, but I think personally, for myself, absolutely as far as what I expect from myself,” he added. “I’ve been very vocal about where RCR was as an Xfinity team as far as performance when I got there in 2017. There’s no doubt about it, they were not a winning team and I probably wasn’t ready to win. But I took pride in being a vital part, me and the groups I worked with to help rebuilding that program through 2017 and really took a huge stride, I thought, in performance towards the end of 2018.

“If we go about it and execute like we need to, I think this is my best opportunity to go win races and that’s what I’m going back to do.”

As far as goals, Hemric wants to have captured a couple of checkered flags by the time of his “eighth to 10th start.” Regardless, he’s feeling refreshed with the opportunity to run for an organization that’s won three of the past six Xfinity driver championships with current Cup stars Chase Elliott, William Byron and Tyler Reddick.

Hemric said: “It’s really a breath of fresh air. A lot of people have reached out to me and made sure, personally, I was in a good spot and where I was mentally at after the route back to Xfinity racing in 2020. I’ve told everybody it’s a bit of a wake-up call that everyone needs, no matter what we’re doing in life.

“It’s also been another opportunity to reevaluate myself, what my strengths and weaknesses are and tried working on that over the offseason. …I’m as recharged, hungry and fired up ready to go. ”

Hemric’s first race in the No. 8 will be this weekend at Las Vegas Motor Speedway, a place he has a best finish of sixth in three Xfinity starts.