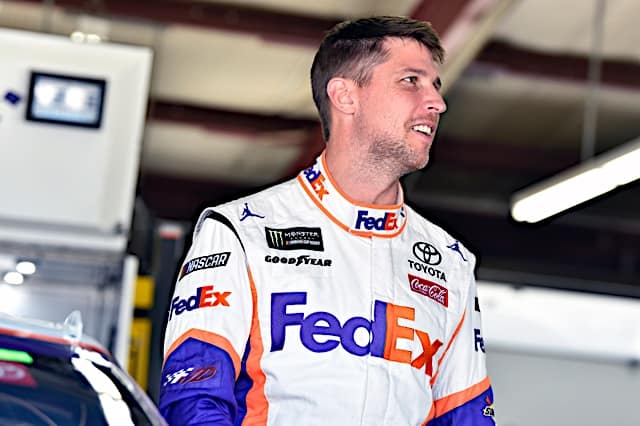 Given the situation, who is the right choice to fill in the No. 6 car in the NASCAR Cup Series while Ryan Newman is recovering?

Amy Henderson: I like the driver RFR went with, Ross Chastain. He’s shown that with good equipment, he can be racy and he can finish well for the team this weekend. Ford doesn’t have many drivers in the pipeline, with just Team Penske’s Austin Cindric and Stewart-Haas Racing youngster Chase Briscoe in the Xfinity Series.  Chastain has Cup experience while they don’t, and Chastain resonates well with fans as well because of his underdog performances. He’s a solid choice with the right combination of talent and marketability.

Jesse Johnston: I will go with a driver who’s already in the blue oval camp. He may have no Cup experience, but he’s on cloud nine after picking up the third win of his Truck Series career at Daytona in dramatic fashion. I’m talking about Grant Enfinger. The Alabama native seems to fare well on larger speedways, with all three of his Truck wins coming at tracks 1.5 miles or greater in length (including Las Vegas Motor Speedway). With momentum on his side after that Daytona win, getting the chance to make his Cup debut with one of the most historic teams in NASCAR would be icing on the cake.

Mark Kristl: I agree with the Chastain choice, though I am surprised Chastain, a Chevrolet driver, was able to fill in for Newman. Regardless, this opportunity could serve as an audition for Chastain for a possible 2021 Cup ride.

Where does Denny Hamlin fall in terms of NASCAR’s all-time greatest drivers?

Henderson: The best comparison for Hamlin is Mark Martin, because both have a lot of wins and no title. Martin is already a Hall of Famer, and Hamlin should be a lock when he’s eligible. He’s got three Daytona 500 wins, and two more wins at any track will tie him with Martin’s career total. Hamlin’s 38 wins are 22nd best all time. There are exactly four drivers with more wins who are not in the Hall, and that’s because they’re not yet eligible. While Hamlin will always be dogged by his inability to close the deal on a title (at least until he does it), he ranks among some of the best ever.

Johnston: Hamlin is most comparable to Junior Johnson. Johnson is credited with discovering the art of drafting in the 1960 Daytona 500, a race he won. Hamlin’s second straight Daytona 500 win proves that he has these skills mastered at this point. Although a Cup championship is something that has always been just out of reach, 38 career wins, with three of them being Daytona 500s, is still not too shabby at all. And it just may land him in the NASCAR Hall of Fame one day.

Kristl: He is probably the second-best driver without a championship behind Martin, and he is closing that gap. However, Hamlin lacks a championship in both the Cup and Xfinity series, so I still rank him behind Terry Labonte, Bobby Isaac and Dale Jarrett.

Will Jimmie Johnson win a race this season?

Kristl: Jimmie Johnson will go winless this season. The Daytona 500 showed us the amount of talent in the Cup field. Chris Buescher upgraded his ride, the rookie class is strong and a driver like Ricky Stenhouse Jr. may surprise us with a victory this year. Johnson’s Hendrick Motorsports teammates are still maturing as drivers, but for Johnson, his peak is behind him.

Johnston: While most people are optimistic, I will be realistic here. Johnson will not win a race in 2020, and his career wins total will stay at 83. It isn’t so much his age but rather the state of his team. If Johnson had a team like Kevin Harvick, Clint Bowyer, Martin Truex Jr. or Hamlin, he could easily contend for wins with drivers who are near his age. But his team just doesn’t seem all that flashy compared to those other drivers, along with his Hendrick teammates. Any chance he has left to win will come at the superspeedways.

Henderson: Yes. He hasn’t forgotten how to drive, so it’s a matter of his team being able to put a winning car under him.  And while Chase Elliott is clearly the focus at Hendrick these days, Johnson’s team should be able to give him a horse at least once this year.

Who turns their feel-good story at Daytona International Speedway into better season in 2020: Timmy Hill or Jordan Anderson?

Johnston: Between Timmy Hill and Jordan Anderson, I give Anderson the nod. Anderson has overcome a lot to get to this point in his career. With him being an owner-driver now, any race when he loads his No. 3 Chevrolet Silverado on his trailer in one piece is a good day in itself. But a second-place finish at Daytona in the Gander RV & Outdoors Truck Series, with the win just inches away, is still a respectable feat. And this finish has brought him a new level of confidence he’s never had before.

Kristl: Hill is a jack of all trades, but Anderson will have a better season. Anderson is running full time, so he will have more opportunities to shine. His Truck team equipment is better than Hill’s equipment in any NASCAR series, Anderson is improving his Truck team and he is steadily gaining more sponsors.

– I’ve always seen Denny Hamlin as a more aggressive version of Mark Martin and given how strong the Gibbs team is, he seems to stand a better chance of succeeding where Martin failed.

– As far as the younger drivers go, I really like Ross Chastain! I can definitely see him as a possible successor to Kurt Busch when his time in the #1 Ganassi car is done.