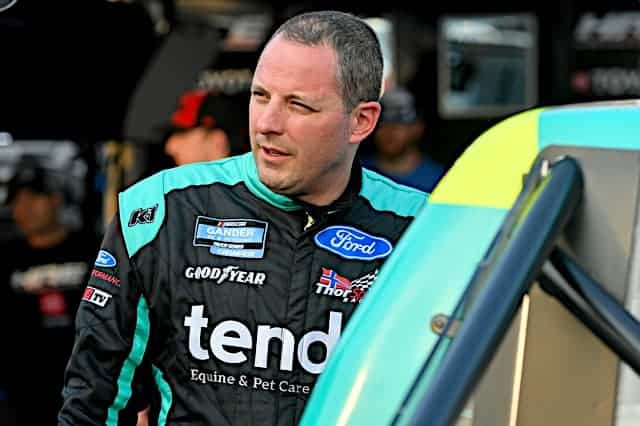 For the first time since 2016, Johnny Sauter has won a pole in the NASCAR Gander RV & Outdoors Truck Series.

GMS Racing’s Sheldon Creed was right behind Sauter with a speed of 177.643 mph, while Kyle Busch will start from the third position in his No. 51 Kyle Busch Motorsports Toyota.

Christian Eckes and Ty Majeski round out the top five.

Last week’s winner Grant Enfinger will start from the ninth position in his No. 98 Ford.

One incident slowed the session as Angela Ruch looped her No. 00 Toyota on her warmup lap. NASCAR allowed Ruch’s team to change a tire and make another attempt, which was good enough for the 31st spot on the grid.

Two other divers had issues in qualifying. Although he was able to complete a lap, Ruch’s teammate Josh Bilicki suffered engine woes that will put him last on the grid. Bayley Currey had a big slide during his run but was able to keep his No. 49 Chevrolet righted.

Currey, along with Korbin Forrister and Jennifer Jo Cobb, failed to qualify on speed.

The green flag for the Strat 200 is scheduled to drop at 9 p.m ET with TV coverage on Fox Sports 1.