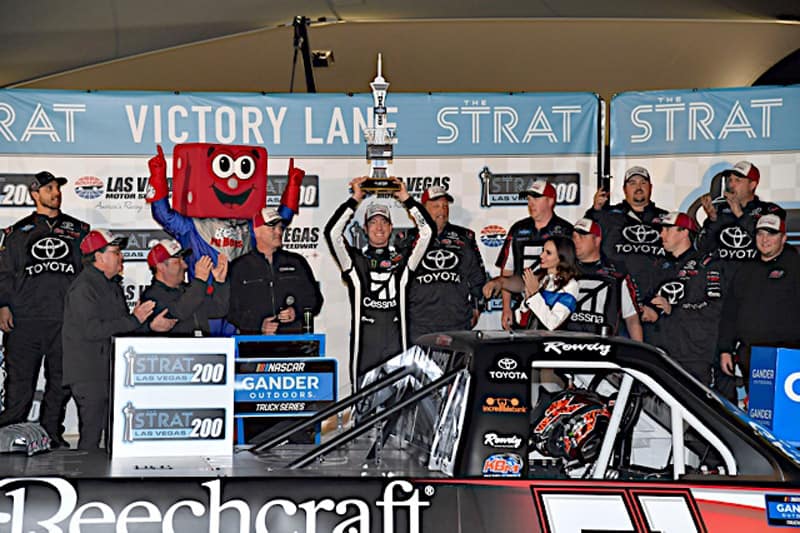 The streak continues: Kyle Busch has now won every NASCAR Gander RV & Outdoors Truck Series event he has raced in since July 2018.

The Nevadan picked up his seventh consecutive NGROTS win after claiming the checkered flag in Friday’s (Feb. 21) Strat 200 at his home track, Las Vegas Motor Speedway. Busch’s No. 51 dominated the event, leading 108 of the 134 laps while cruising to a nearly six-second victory over Johnny Sauter. With the win, Busch extends his record for the most wins in the series to 57.

“I don’t know why, but we just couldn’t fire off on the restarts,” Busch told FOX Sports. “Once we got about 10 laps in, we just start to check away from everyone. The [truck] had really good long-run speed. Our guys did a fantastic job.”

Fortunately for Busch, restarts were few and far between. There were just three cautions besides the stage breaks, with the last coming on lap 91 for a tangle between Raphael Lessard and Grant Enfinger that forced both drivers to retire from the event.

On the ensuing restart, Busch faced his toughest challenger, as he and Sheldon Creed had a spirited side-by-side battle for several laps. However, a costly bobble by Creed allowed Busch to cascade back to the outright lead for the final 35 laps.

The No. 2 of @sheldoncreed puts up a big fight, but a big bobble gives the top spot back to @KyleBusch. pic.twitter.com/RCmaCWsq4l

The opening laps of the race didn’t go as smoothly, as the field was slowed on just the third lap after Rookie of the Year contender Derek Kraus‘s No. 19 McAnally-Hilgemann Racing Toyota got loose and made contact with the wall.

For the first half of the race, Christian Eckes looked to have one of the only trucks in the field who could keep up with Busch. The New Yorker even managed to lead 10 laps, but his promising night came to a sudden halt when his No. 18 Kyle Busch Motorsports Toyota smacked the wall. Eckes managed to stay on the race track, but he was never in contention as he finished off the lead lap in the 23rd position.

While Busch scooted away throughout the night, pit penalties plagued the vast majority of the field. Several drivers, including Stewart Friesen, Austin Hill, Tyler Ankrum, Spencer Davis, Tate Fogleman and Spencer Boyd, were hit with penalties, with Ankrum being hit hardest by suffering a one-lap penalty for pitting outside the box. Ankrum did manage to get back on the lead lap and went on to finish 11th.

I don’t even bother to watct Trucks of Xfinity when Kyle Busch runs. Boring.

It’s his little playground. I don’t know what he thinks he still needs to prove by dipping down in the lower series but he sure does stink it up. I fast forwarded this “race” in less than 10 minutes.

I usually go over to my best friend’s house on Friday night to drink a few beers and hang out. So before the race started I said what a waste of time it was going to be to watch the truck race since Busch was running. My friend, in order to prove me wrong, suggested that if I was that sure then he’d bet me $10 and he’d take the rest of the field against Busch. Needless to say, I am $10 richer this morning.

So all you need to do to make the truck races fun when Busch is in them, is to find a friend stupid enough to make that bet.

It is my feeling that KB diminishes his status by his ego centered need to run in lower level series to pad his gaudy win record. He is without a doubt one of the greatest to ever race at the cup level. yet he constantly participates as much as the rules allow in the Xfinity as well as the truck series.when competing in those series he always has the best possible equipment and the most experienced crews and crew chiefs so it is a no brainer that he is most likely to win.

Tuned in after the start. Tuned right back out.

I agree with all of you and already said this in another column but it’s the same mentality as Lebron James moonlighting in a Highschool basketball game and getting credit for lighting up the scoreboard. The only positive I see out of this is Bill B. making $10 off of the race ?. Way to go Bill!

Agree. With no KB truck races are great. When he’s in the race I just fast forward until a yellow hoping it is KB. He may be a great cup pilot but by ruining the lowers series races hes in just shows he is a jerk of the first order, Lew

Strike One, Busch in the race.
Strike Two and Three ,Waltrip in the booth with a mike in his hand.

With all the parity in NASCAR it is hard to win in any series. It takes more luck than skill and equipment. Thousands of things can take that victory from you. How come the 51 truck doesn’t win all the time with other drivers at the wheel? You are really insulting the other drivers and owners saying how skilled Kyle is. Dominance performance in sports is very rare. People should appreciate what they see not detest it.
Was there this hate about Petty in the 60’s & 70’s? I don’t think so. Thank you Social Media!

Baby Busch doesn’t come close to winning as often in Cup as he does in the lower series’ events. The reason must be hard for his ego to admit to.