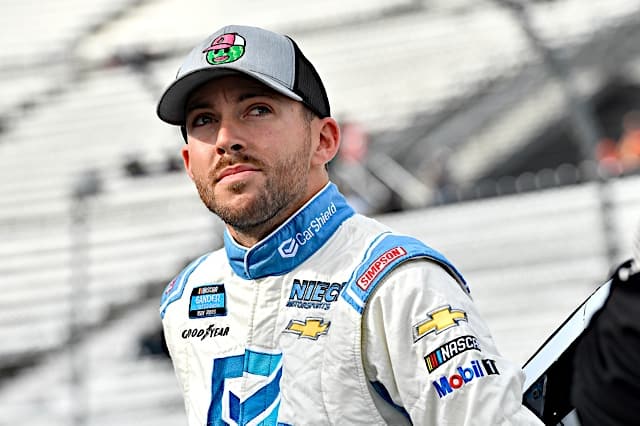 Ross Chastain‘s big weekend continues in Nevada as he went straight to the top of the board in Friday’s (Feb. 21) lone practice for the Boyd Gaming 300 at Las Vegas Motor Speedway, the second event on the 2020 NASCAR Xfinity Series calendar.

Chastain, who is also slated to drive the No. 6 Roush Fenway Racing entry in the NASCAR Cup Series this weekend in relief of the injured Ryan Newman, clocked in a top speed of 176.881 mph in his usual No. 10 Kaulig Racing Chevrolet.

The quick lap in practice follows Chastain’s Xfinity qualifying session at Daytona International Speedway in which he failed to qualify for the event, having to take over RSS Racing’s No. 38 for the race.

Brandon Brown was second fastest with a speed of 176.719 mph in his No. 68 Brandonbilt Motorsports Chevrolet, while Stewart Haas Racing’s Chase Briscoe was third in the session.

Only one incident took place during the 80-minute session. Myatt Snider‘s No. 21 Richard Childress Racing Chevrolet got loose in turn 4 and slide into the infield grass, which produced significant damage.

Not ideal for the No. 21 machine of @MyattSnider. ?#XfinitySeries Practice continues from @LVMotorSpeedway on FS2. pic.twitter.com/vw0YZBbZNX

Only 33 of the 36 drivers entered took a lap in practice. Vinnie Miller, Landon Cassill and Stephen Leicht were the notable absentees.

Qualifying for the Boyd Gaming 300 is scheduled for Saturday, Feb. 22 at 1 p.m. ET, with the green flag scheduled to drop late in the afternoon at 4 p.m. ET. Live TV coverage will be provided for both events by Fox Sports 1.