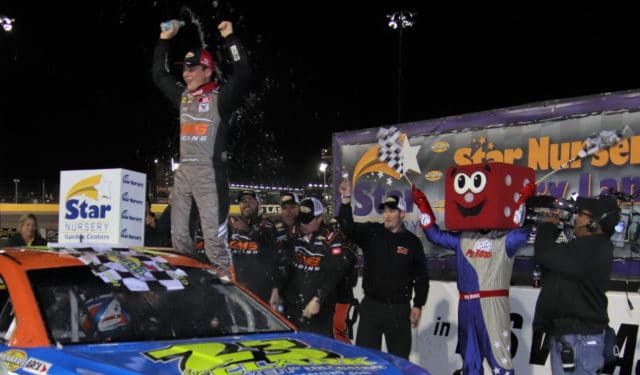 GMS Racing’s Sam Mayer was not perfect Thursday night (Feb. 20) at The Bullring at Las Vegas Motor Speedway.  Then again, he didn’t really need to be.

The win was made all the more special for GMS Racing due to the fact that Mayer was running a special paint scheme to promote the Spencer Clark Driven Foundation.  Spencer Clark was an up-and-coming racer who made one start in what is now the Xfinity Series in 2006.  Clark’s career was cut tragically short by a crash while transporting a race car back to Las Vegas from Charlotte, which killed him at the age of 19.  Spencer’s father, TJ Clark, was a car owner and coach of former driver Spencer Gallagher, who currently works in management at GMS Racing.

“This is so special.  I never had a connection to Spencer [Clark], but being with the team, I feel that connection,” Mayer told NBC Sports’ Heather DeBeaux in victory lane.  “We definitely did what Spencer would have done.  Go out and wax the field.  I’m going to enjoy this one, that’s for sure.”

From the very start of the race, Mayer and Love appeared to be in a league of their own as compared to the rest of the field.  In Love’s case, The Bullring at Las Vegas Motor Speedway is his home track.  Having previously raced Legends cars on the three-eighths of a mile oval, Love was able to keep himself even with Mayer for the first couple of laps before getting to the inside entering Turn 1 to take the lead on Lap 3.

Love attempted to open up a lead on Mayer, but he may have gone a little too quickly.  It wasn’t long before Mayer ran Love back down and took the lead back.  Once out front, Mayer settled into a nice rhythm.

The sole incident of the evening occurred on Lap 26 when Bill McAnally Racing teammates Gio Scelzi and Lawless Alan collided in turn 4.  Scelzi spun out his NAPA Auto Parts Toyota and lost at least a lap trying to get back underway.  He was unable to make up his time and ended up finishing ninth, two laps down.

Thursday night was a much more successful night for Bill McAnally Racing as compared to New Smyrna Beach.  There, no McAnally cars finished in the top 10.  Love and Scelzi were the best from the stable in 12th and 13th.  Thursday night saw Love spend most of the night in second, while Gracie Trotter got past Joey Iest at the start and held onto third for much of the race.

A caution for debris was thrown with 11 laps to go, eliminating a lead of nearly four seconds for Mayer over Love and nearly ten seconds over Trotter.  This set up a seven-lap sprint to the checkers.  Love gave it his all, but simply could not keep Mayer from taking the win.

Mayer’s margin of victory was 1.762 seconds over Love.  Blaine Perkins in the Bob Bruncati-owned No. 9 Ford was able to get past Trotter in the closing laps to finish third, while Trotter settled for fourth.  Trevor Huddleston in the second blue and orange Bruncati-owned Ford was fifth.  Alan had raced up to fourth after starting 10th, but dropped back to sixth after the final restart.

The broadcast of the Star Nursery 150 is currently available on-demand for subscribers to NBC Sports’ TrackPass.  The race will air via tape delay on NBC on Feb. 25 at 6 p.m. ET.