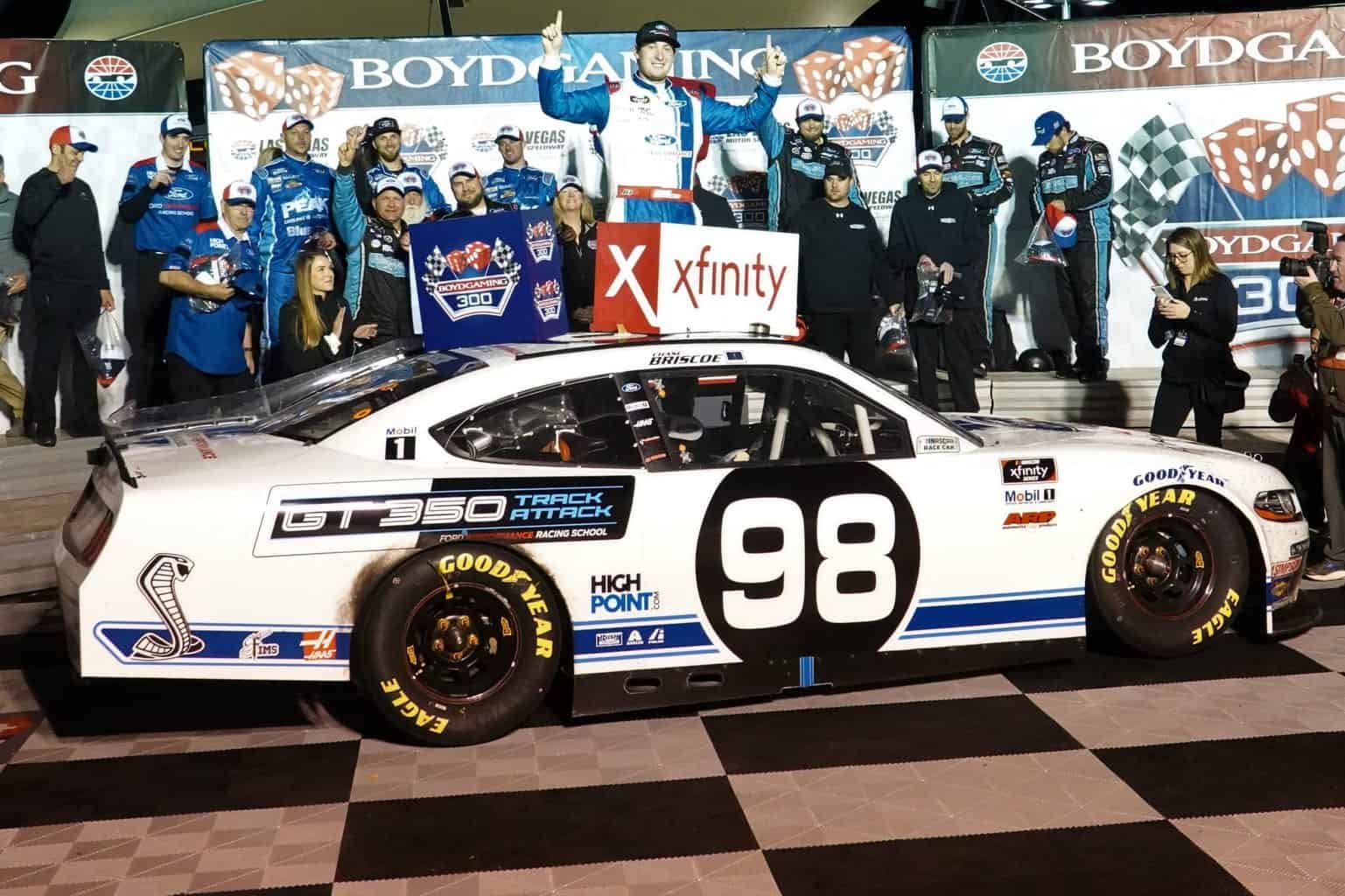 It may go down as the longest Xfinity Series race in Las Vegas Speedway history. The Boyd Gaming 300 began on Saturday afternoon and finished up Sunday evening and while the long delay may have made life difficult for some drivers, for Mitchell, Ind.’s Chase Briscoe, it was worth the wait.

The 25-year old driver held off fellow Ford campaigner Austin Cindric in the closing stages to score his third career victory. The win gets him one step closer to the 2020 playoffs. Ryan Sieg finished in third with Noah Gragson and Harrison Burton rounding out the top five.

Briscoe gave credit to his team for an incredible pit stop that gave him the lead late in the race.

“It was really a team win,” Briscoe stated in victory lane. “We were really good in the daylight but as soon as the sun went down and in dirty air, we just weren’t very good. In clear air at the end we were really good. This is something I feel like we can do all year long and I’m thankful that I’m the one driving it.”

Briscoe was running third when the fifth caution of the race came out after Noah Gragson and Myatt Snider got together in the tri-oval on lap 163. The contact sent Snider’s No. 21 Richard Childress Racing Chevrolet spinning through the infield grass.

Each team had a set of fresh tires in the pits and that took any strategy away as the leaders were all coming in for some fresh rubber. Briscoe’s team gained him two spots and he led the field off of pit road and made him the control car on the lap 169 restart. Cindric put pressure on him early but then Briscoe pulled away and sailed to victory.

Cindric’s stellar run led Ford to have their only two cars in the series finish first and second. The story of the night however, belonged to Sieg. Sieg’s RSS Racing team has no Cup affiliation and is a family-run operation with less than 10 full-time employees. The third-place run at Las Vegas marked just the sixth top-five finish of Sieg’s career and the first on an intermediate track.

The race began on Saturday afternoon around 5:30 p.m. ET after multiple delays due to rain. When the race finally began, Daniel Hemric found trouble hitting the outside wall and causing the first caution. Briscoe led the field through the first stage and on lap 50 the sky opened up and the rains came.

The race was delayed until after the Cup Series race on Sunday and it resumed at 7:50 p.m. ET with Joe Graf Jr. in the lead. Graf had stayed out on a round of pit stops to get the lead but would pit shortly before the remaining 150 laps were ran on Sunday.

Briscoe lost the lead on restart to Justin Allgaier, who’s car came to life early in the second stage. Allgaier led through stage two and looked like the car to beat when the third and final stage went green on lap 96.

Allgaier continued to show how strong his car was through the beginning the final stage, leading through lap 120. However, as the night progressed and the track started to change, new faces emerged. Cindric took the top spot from Allgaier and Allgaier’s No. 7 Chevrolet began to fade.

Cindric, meanwhile, began to pull away from the field. Cindric led until the lap 161 caution where Briscoe got the lead on pit stops and never looked back.

Brandon Jones finished sixth, followed by Michael Annett in seventh and Allgaier in eighth. Riley Herbst and Ross Chastain rounded out the top 10.

The Xfinity Series is next on track Feb. 29 for the of the Production Alliance Group 300 at Auto Club Speedway. Coverage from Fontana Saturday will air live at 4 p.m. ET on FOX Sports 1.