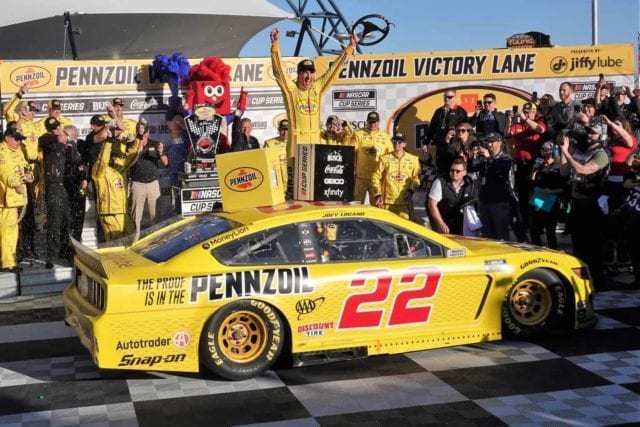 Joey Logano prevailed in an eventful ending of the Pennzoil 400 presented by Jiffy Lube at Las Vegas Motor Speedway Sunday (Feb. 23).  A spin for Ross Chastain coming off of turn 2 with six laps to go brought out a late caution, Logano inherited the lead by leading a group of seven drivers that decided to stay out to fend off the rest of the field with over 30 lap old tires.

On the final restart, Logano was able to get a push off of Ricky Stenhouse Jr. in fourth, rocketing him ahead of William Byron in second. Contact with Matt DiBenedetto caused a tire rub on Byron’s No. 24 Chevrolet, and he ended up dropping back to finish 22nd.

Logano crossed the white flag, then trouble struck in the middle of the field. First, Byron had contact with Ryan Blaney and Erik Jones, exacerbating Byron’s tire rub and giving Blaney as well. Then, Kyle Busch and John Hunter Nemechek came together. The multi-car incident that resulted from the Busch-Nemechek contact caused a caution right in the nick of time for Logano, who won the race as the rules state that the next flag after the white wins the race.

“There was a little confusion, but it worked out really well,” Logano told FOX Sports’ Vince Welch after the race. “A lot of cars stayed out and that was key to that move. Winning the Pennzoil 400 with the Pennzoil car, this is huge.  It means a lot to be able to do this two years in a row winning this race.  I’m proud of the effort everybody here behind me did today.”

DiBenedetto ended up second and Stenhouse Jr. was third. Austin Dillon stole fourth and a last lap pass on the apron of the backstretch led to Jimmie Johnson finishing fifth. Bubba Wallace was sixth, followed by Brad Keselowski and Kevin Harvick. Kyle Larson and Ty Dillon rounded out the top 10.

Coming to take the green flag at the start of the race, Daniel Suarez didn’t fire off and was slow enough that he caused the first caution of the race on lap one. He was able to continue after some work in the pits. Suarez would eventually finish four laps down in 30th.

Michael McDowell went to the garage with a stuck throttle midway through the stage. He was able to wheel his Ford to pit road without causing any incidents. McDowell finished 36th.

Chase Elliott seemed to be the class of the field. Elliott passed Harvick for the lead with 13 laps to go in the stage, going on to win the stage while Truex was able to get around Harvick in the closing laps for second. Elliott then won the second stage as well and seemed to be heading to his first victory of the season before trouble struck.

During green flag pit stops, and after prevailing in a duel with Blaney at the 200 lap mark, Elliott’s left rear tire went flat due to a broken valve stem. The flat tire sent Elliott spinning into the turn 1 wall and causing a caution. The heartbroken Elliott was able to continue the race, but was only able to muster a 26th-place finish out of what could have been a big win.

Due to the caution taking place during green flag pit stops, JTG-Daugherty Racing teammates Stenhouse Jr. and Ryan Preece were going to share the front row. However, Preece pulled into the garage with just a lap to go prior to the race restarting, leaving Stenhouse to fend for himself out front.

A battle took place up front for the next 25 laps. First Logano and Harvick battled for the lead, then Blaney passed both while Harvick and Logano faded as the run kept going. In the closing laps, Alex Bowman began to enter the picture, battling with Logano for second.

NASCAR Goes West continues next weekend as the NASCAR Cup Series moves to Fontana, Calif. for the Auto Club 400. Coverage is scheduled to start with NASCAR RaceDay at 2 p.m. ET on FOX Sports 1.  Race coverage will begin at 3:30 p.m ET on FOX.

Your headline should read ANOTHER UNNECESSARY YELLOW FLAG GIVES JOEY LOGANO PENNZOIL 400 VICTORY. I’m not talking about the last caution flag, but the second last caution flag with 6 laps to go. This was a good race with lots of speed and passing. It was going to be a climatic finish between three cars until the dreaded late yellow flag. Ross Chastain’s spin was completely harmless to the racing field. He was way out the racing groove, didn’t hit the wall and never stop moving. I’ve seen no yellows for a lot worse.
As a racing fan seeing the lead driver get screwed is more disappointing than the excitement of seeing these action paced side by side restarts. I root for all drivers that race their way to the front. No bias or favorites.