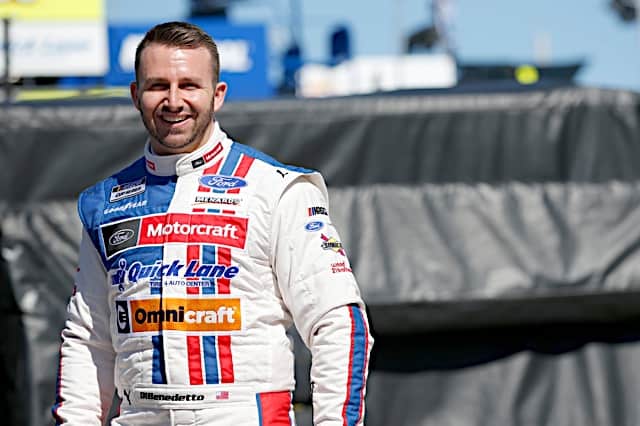 Joey Logano successfully defended his 2019 victory in the spring race at Las Vegas Motor Speedway, winning the Pennzoil 400 in a Pennzoil-sponsored Ford. Logano was a factor all day, running in the top five for most of the race, but he also got a little lucky. Teammate Ryan Blaney and Alex Bowman had both gotten by him and it looked like they would settle it for the win, but a spin by Ross Chastain brought out the caution, and while Blaney, Bowman and several others pitted for fresh tires, Logano stayed on track.

And luckily for him, a handful of others did, too, giving him the buffer he needed, combined with a perfectly-executed restart, to take home the win.

Wood Brothers Racing didn’t finish in the top five in 2019, but that’s already checked off the list in 2020 as Matt DiBenedetto outraced Ricky Stenhouse Jr. for the runner-up spot. It’s DiBenedetto’s fourth career top five and his second top 10 at an intermediate track (his other coming at Darlington last year). The No. 21 struggled last year, so it may be too early to call winning a when instead of an if, but DiBenedetto is certainly making a case for himself already to stay in the car beyond 2020.

What… was the hidden gem this week?

A week ago, the NASCAR community sat in stunned disbelief waiting for word on Ryan Newman after his horrific crash on the last lap of the Daytona 500. It was over two hours before the collective sigh of relief at the news that Newman’s head injury was not life-threatening.

But it was Wednesday that reminded us all that racing is secondary in the world, as Newman walked out of the hospital holding his two daughters’ hands. Hours later, he was back home in North Carolina and spending time with good friends Martin Truex Jr. and Sherry Pollex. Even one of the best intermediate track races in recent memory can come close to knowing that the sport didn’t claim anybody once again.

Polesitter Kyle Busch started shotgun on the field after failing inspection post-qualifying, and it took him much longer than expected to work his way toward the top 10 as he struggled to find the balance he needed in the No. 18.  He did make his way toward the front, waging a hard battle with Jimmie Johnson for position just outside the top 10 before coming out of the final restart with a 14th-place finish.

All-time LVMS win leader Johnson scored what must have felt a little like a win with a fifth-place finish. The improved Chevrolet Camaro seemed to be a big step in the right for Johnson as well as several others, and he drove more like a seven-time champion than the driver we’ve seen in the last couple of years, with an aggressive move on the final restart to move into the top five before the caution flew to end the race. It was vintage Johnson on display and a statement that if he has competitive cars, he can still be a competitive driver in his final season.

Along with his teammate, last week’s winner Denny Hamlin had to start from the back after inspection issues, and he also struggled to gain ground, losing a lap late in the second stage which he got back thanks to a Christopher Bell caution. The Daytona 500 champ had to settle for finishing 17th this week.

While part of this was due to the late restart, it served to show the strength of the field when teams are able to make circumstances work in their favor. It made it seem like a sport where the winner wasn’t a foregone conclusion (and really, in this race, it never did). That’s what NASCAR is about, and when it was happening weekly, it’s what brought fans in droves. It’s what the sport needs to figure out how to have more often.

It will be worth watching in the coming weeks to see if Chevrolet can come to the table this year on any kind of consistent basis. With six in the top 10 Sunday, it looks like changes to the Camaros are helping the cause, but the test will continue over weeks as the manufacturer works to find a little of the magic that led to dominance in NASCAR for many years.

NASCAR needs all three manufacturers to be competitive. Many fans are more loyal to a certain make than to any driver, and the sport can’t afford to see fans drift away at a time when change is on the horizon. A 2020 with a few new winners across manufacturers would be a victory for NASCAR as the sport moves forward.

How… much did handling matter on Sunday?

A lot. In fact, it seemed sometimes to matter as much if not more than the dreaded clean air. A car with a good long-run setup could chase down one that faded not long after a restart. Drivers were able to run down and pass the leader. Bowman was gaining on Blaney at a rate that might have produced a fantastic finish had the yellow flag not come out for Chastain so late in the game, and Bowman had come from a somewhat distant third to do it.

Drivers were able to complete passes and they were able to come back with crossover moves. This is something NASCAR should note carefully. The more handling matters, the less the air will, at least to an extent. The more areas teams have to work on handling and to make wholesale changes to gears and suspensions, the better the racing will be. Sunday’s race was one of the best daytime races the current package has produced at an intermediate track. Is there anything to be done to help assure more races like this one? The sport needs to find out.

Although I am optimistic, I am concerned for the lack of updates on Ryan Newman’s condition.

Any doubt about how much more support Toyota is giving Leavine Family Racing now with Christopher Bell at the wheel was erased with the inspection penalties at Las Vegas.

The Michael Waltrip “between the Busch’s” parody on pre race was horrible.

Not a Logono fan but you have to appreciate the strategy that got him the win.

Ditto on the horrible Michael Waltrip parody. Afterwards, they went to Kurt Busch and he looked totally embarrassed. He should have. Everyone involved should have.