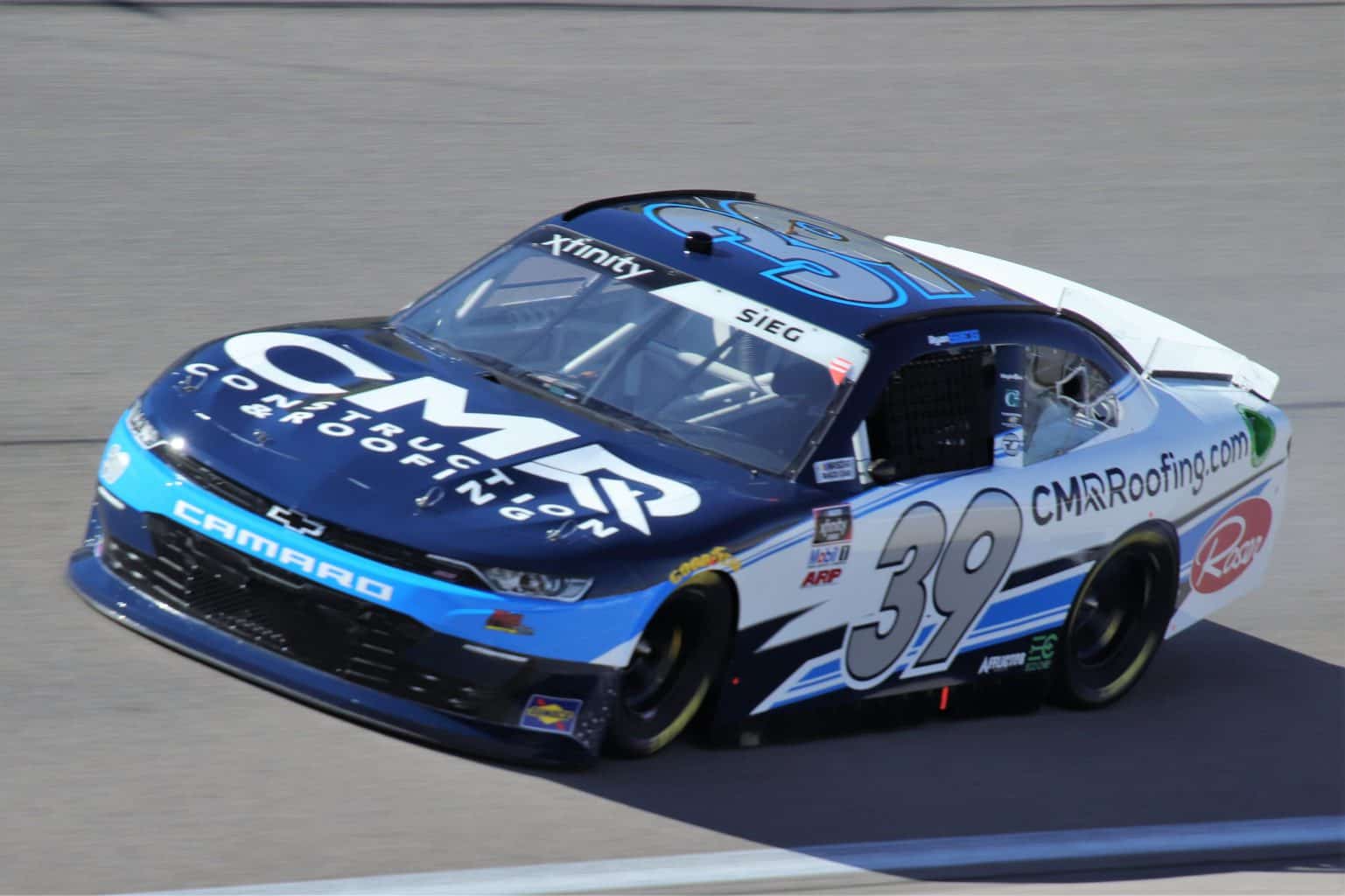 After a rain delay, 50 laps of racing and a postponement, the NASCAR Xfinity Series finally got underway Sunday evening after a frantic finish to the Cup Series’ event.

Chase Briscoe scored his first victory of the season and third of his Xfinity Series career, doing so carrying a paint scheme honoring legendary Ford icon Carroll Shelby. Briscoe has now scored a victory in each of his three seasons in the series.

The Boyd Gaming 300 was pushed to Sunday evening after recurring rain throughout Saturday made on-track activity nearly impossible, the series only getting 50 laps in before the final stoppage.

Briscoe and Austin Cindric battled back and forth after a strong early showing from Justin Allgaier. Briscoe’s No. 98 won the first stage, while Allgaier took the second but faded late in the race.

After a Daytona opener that saw some chaos, some strategy and a finish under yellow, the drivers seemed to settle down in Nevada and got back to racing, with a few competitors swapping the lead over the rest of the race.

Briscoe’s win locked himself into a playoff spot for 2020 alongside Gragson, also in his sophomore full-time Xfinity season. Briscoe had also previously said that he would consider one or two wins in 2020 a failure and that around eight would move him up to the Cup Series. He’s well on his way to multiple wins after Sunday’s performance.

Cindric, Michael Annett and Riley Herbst rebounded to score top-10 finishes after crashing out at various points at Daytona last week, while Burton and Brandon Jones continued their strong starts to the season – Burton with his second straight top-five effort. Gragson, last week’s winner, came home fourth, a solid follow-up to his victory.

After having a stout car early on, Allgaier drifted back and never quite found the speed he used to win stage two, eventually finishing eighth.

Meanwhile, grass seemed to be Myatt Snider‘s kryptonite in Las Vegas. The driver of Richard Childress Racing’s No. 21 sat on the pole when qualifying was rained out but started at the rear after crashing during practice, demolishing the front end of his Chevrolet. He scored a top 10 in stage two but was later turned into the infield by Gragson as the race neared its conclusion.

That incident between Gragson and Snider marred the waning moments of the race; Gragson appeared to turn up into Snider’s No. 21 Chevrolet and sent him spinning through the grass. The two young drivers had a discussion after the race when Snider made his way over to Gragson but did not conclude their confrontation by shaking hands.

Ryan Sieg came one spot shy of tying his best career finish in NASCAR’s secondary division with his third-place effort, running well all night, surviving a vibration and hanging with the leaders.

Pulling double duty in the same day were Ross Chastain, Joey Gase, JJ Yeley and Timmy Hill. Chastain scored the best finish of the quartet, coming home 10th in Kaulig Racing’s No. 10 after filling in for Ryan Newman in Roush Fenway Racing’s No. 6.

“I knew what we were capable of last year, even at the end of the year, and then with Cole moving up and a lot of the Big Three moving up, it definitely creates an opportunity to kind of be that new guy. So this is a good way to start off the season, especially on the west coast, and looking forward to getting to Fontana.” – Chase Briscoe

The series put on a great show as they swung to the opposite coast and a different time zone. A few comers and goers, but the leaders were strong all night and we saw one of the race’s best cars take the checkered flag. Be on the lookout for strong performances from Briscoe all season and a playoff run from the No. 98 pilot.

Auto Club Speedway will next host the Xfinity Series on Feb. 29, while a date at Phoenix (March 6) completes the west coast swing. Atlanta Motor Speedway (March 14) and the new spring date at Homestead-Miami Speedway (March 21) will follow.

adam cheek who the hell finished 2nd at vagas or can’t you see or just bias as hell you can go down & kiss gm in the mouth but FORD finished 1&2 i guess gm was in your eye too much so have a gm day & DON;T FORGET GM IN YOUR NEXT COLUMN