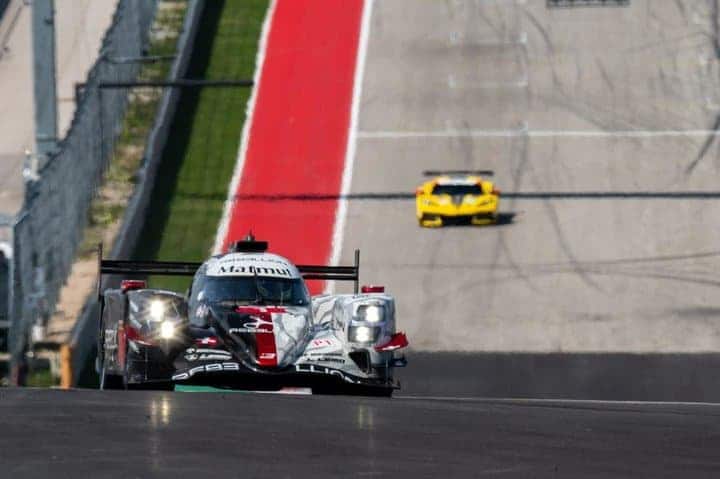 Rebellion Racing’s Gustavo Menezes, Norman Nato and Bruno Senna dominated the proceedings Sunday (Feb. 23) at Circuit of the Americas.  The trio combined to lead 156 of the 189 laps en route to winning the Lone Star Le Mans, the fifth round of the 2019-20 FIA World Endurance Championship.

Changes to the WEC’s success handicap system ahead of the COTA weekend slowed the Toyota TS050-Hybrids by a couple of seconds a lap.  The move effectively made it impossible to compete with the Rebellion R13.  The 33 laps that the No. 1 did not lead were in and around pit stop sequences.

The pace difference was such that Senna was able to pull away by 16 seconds from the No. 8 Toyota of Sebastien Buemi in the first half-hour of the race.  The No. 7 Toyota of Jose Maria Lopez was 32 seconds behind at that point.

The vast majority of the race saw Rebellion Racing maintain a lead between 35-50 seconds over the No. 8 Toyota.  Outside of the pit stop sequences, Rebellion Racing was never challenged on their way to victory.  Menezes more or less summed up the race in his post-race interview.

“We won!  We did it!,” Menezes said after the race.  “Incredible effort from all the team, from Norman [Nato], Bruno [Senna], and even more from all of our mechanics.  Thank you so much to everyone.  P1!”

The margin of victory was 51.524 seconds over the No. 8 Toyota of Buemi, Brendon Hartley and Kazuki Nakajima.  No. 7 Toyota of Lopez, Mike Conway and Kamui Kobayashi was two laps down in third.

In reality, the scariest moment of the weekend for Rebellion Racing occurred right at the end of Free Practice No. 2 on Saturday when the team blew an engine.  The engine was changed in the three hours between practice and qualifying.  Menezes and Nato then put the car on pole.

LMP2 was quite a bit more exciting.  Cool Racing’s Nicolas Lapierre started on pole, but quickly lost his advantage to United Autosports’ Paul di Resta.  The two teams would ultimately fight back and forth for much of the race.  Lapierre was eventually able to get di Resta back for the lead a few laps later.

A bad tire choice on the start of the race resulted in di Resta dropping back quickly while Lapierre and Racing Team Nederland’s Giedo van der Garde fought it out at the front.  An early pit stop put the team on an alternate strategy for much of the rest of the race.

Once on the correct tires, though, the United Autosports squad of di Resta, Filipe Albuquerque and Phil Hanson charged back to the front and ensconced themselves there.   Hanson took the class lead in the third hour and consolidated the advantage.  From that point on, the lead was only relinquished during pit stop sequences as United Autosports pulled away to take their second straight victory.

The margin of victory was 24.152 seconds over Jackie Chan DC Racing’s Gabriel Aubry, Will Stevens and Ho-Pin Tung.  Aubry previously told Frontstretch back in October that he was only under contract with the team through the end of the 2019 calendar year.  An extension has apparently been accepted.

In GTE-Pro, Aston Martin Racing’s Nicki Thiim and Marco Sorensen were effectively unchallenged during the six-hour race.  The duo combined to lead all but six of the 173 laps completed to take their second straight victory and third of the season.

Due to the positioning of the overall winners, Thiim and Sorensen ended up on a lap of their own at the finish.  In reality, they were only a little over four seconds ahead of the No. 92 Porsche of Michael Christensen and Kevin Estre when they began their final lap.  AF Corse’s James Calado and Alessandro Pier Guidi were third in their Ferrari, while Alex Lynn and Maxime Martin in the No. 97 Aston Martin were fourth.

The GTE-Am class came right down to the final minutes.  Once again, it was Aston Martin at the front.  Ross Gunn was leading in the AMR No. 98 while Charlie Eastwood in the TF Sport No. 90 was putting the pressure on.

With 20 minutes to go, Eastwood was able to make the move to take the lead away from Gunn.  From there, Eastwood pulled out a small gap and held on to take TF Sport’s third class win of the season.