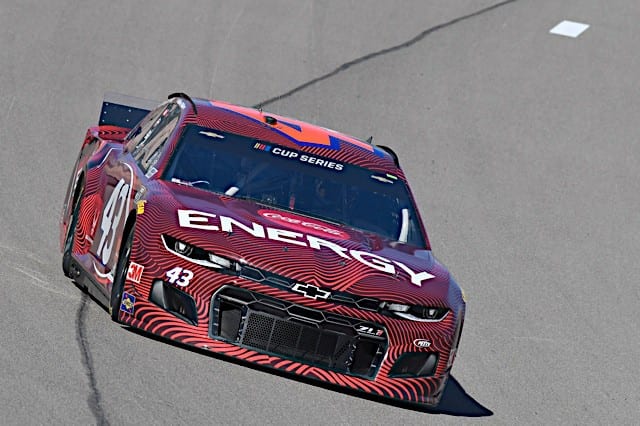 When the three NASCAR national touring series heads out west for the first intermediate action of the season, typically you get a sense of who is going to be good on the cookie cutter racetracks for the duration of the season.

But after a weekend of racing at Las Vegas Motor Speedway, that might not be the case.

Until a caution came out with five laps to go, the finishing order to the NASCAR Cup Series race looked to be the same old, same old: Penske winning in Vegas. However, that came came to a streaking halt when Ryan Blaney, Alex Bowman and other front runners elected to pit.

Instead, the likes of Joey Logano, Matt DiBenedetto, Ricky Stenhouse Jr., Austin Dillon and Bubba Wallace stayed out, hoping their respective 35-lap old tires would hold off the field. Luckily for them, the yellow flag flew again, shortly after the No. 22 Ford took the white flag, awarding the win to Logano.

Of drivers that pitted, Jimmie Johnson was the only one to crack the top five. The No. 48 car finished just ahead of Wallace in sixth, who scored his best career result on a 1.5-mile track, and the best such finish for Richard Petty Motorsports on an intermediate track since Marcos Ambrose finished fifth at Charlotte Motor Speedway in October, 2011 (nine years ago).

With a sixth-place finish, @BubbaWallace picked up his best career finish on a 1.5-mile track.

It's @RPMotorsports' best finish on a 1.5-mile track since Marcos Ambrose finished fifth at Charlotte in October 2011.

Since then, 295 races have passed, obviously not all on 1.5-mile tracks. The team has piled up 13 top-10 results on tracks that make up the bulk of the schedule, with a few seventh-place outings. Through two races in 2020, the No. 43 team sits 12th in points.

It’s not often you see an underdog damn near drive to the lead on an intermediate track, but that’s exactly what Ryan Sieg did in Sunday’s rain-delayed Xfinity Series race in Sin City.

The No. 39 car had to start shotgun on the field, making quick work of getting inside the top 10. And as the 300-mile race progressed, Sieg continued to improve, passing top drivers such as Chase Briscoe, Justin Allgaier and Ross Chastain to get to second.

Unfortunately for the RSS Racing team, Austin Cindric beat out Sieg during a cycle of green flag pit stops, allowing the No. 39 car to lead just one lap. Regardless, Sieg took the checkered flag in third, a career-best on an intermediate track, and best overall result since finishing runner-up to William Byron at Iowa Speedway in June, 2017.

.@RyanSiegRacing's third-place finish was his best result since finishing second at Iowa in 2017.

The finish is the teams best result on a 1.5-mile track — previous best was sixth in this race last year.

Prior to Sunday, Sieg’s best finish on a 1.5-mile track was sixth, coming at Vegas last March.

Surprise, surprise, Kyle Busch entered a Gander RV & Outdoors Truck Series race and was victorious over the weekend at his home racetrack. Chalk seven checkered flags in a row up for Rowdy.

Prior to the 2018 season, NASCAR limited full-time Cup drivers from running in lower divisions. Since then, Busch has been on a mission to win as many races as possible in his allotted five races per year. Hell, last year he went five-for-five. And entering Friday night’s race, he’d won six straight, dating back to July, 2018 at Pocono Raceway.

In dominant fashion, Busch extended his active win streak to seven on Friday, leading 108 of 134 laps. His seven consecutive wins is the most in Truck history, as longtime truckers such as Ron Hornaday Jr. and Mike Skinner could never achieve such a feat. Hornaday had five straight in 2009, competing for Kevin Harvick Inc.

There’s a good chance Busch’s win streak is extended to eight in three weeks at Atlanta Motor Speedway. With four races remaining on Busch’s 2020 Truck schedule, Kevin Harvick put up a $50,000 bounty — only to be matched by Marcus Lemonis, CEO of Camping World for a total of $100,000, should a full-time Cup driver enter a Truck race Busch competes in and beat the No. 51 truck straight up. Game on.

Could you please stop calling them cookie cutters for real so friggin annoying. Grow up