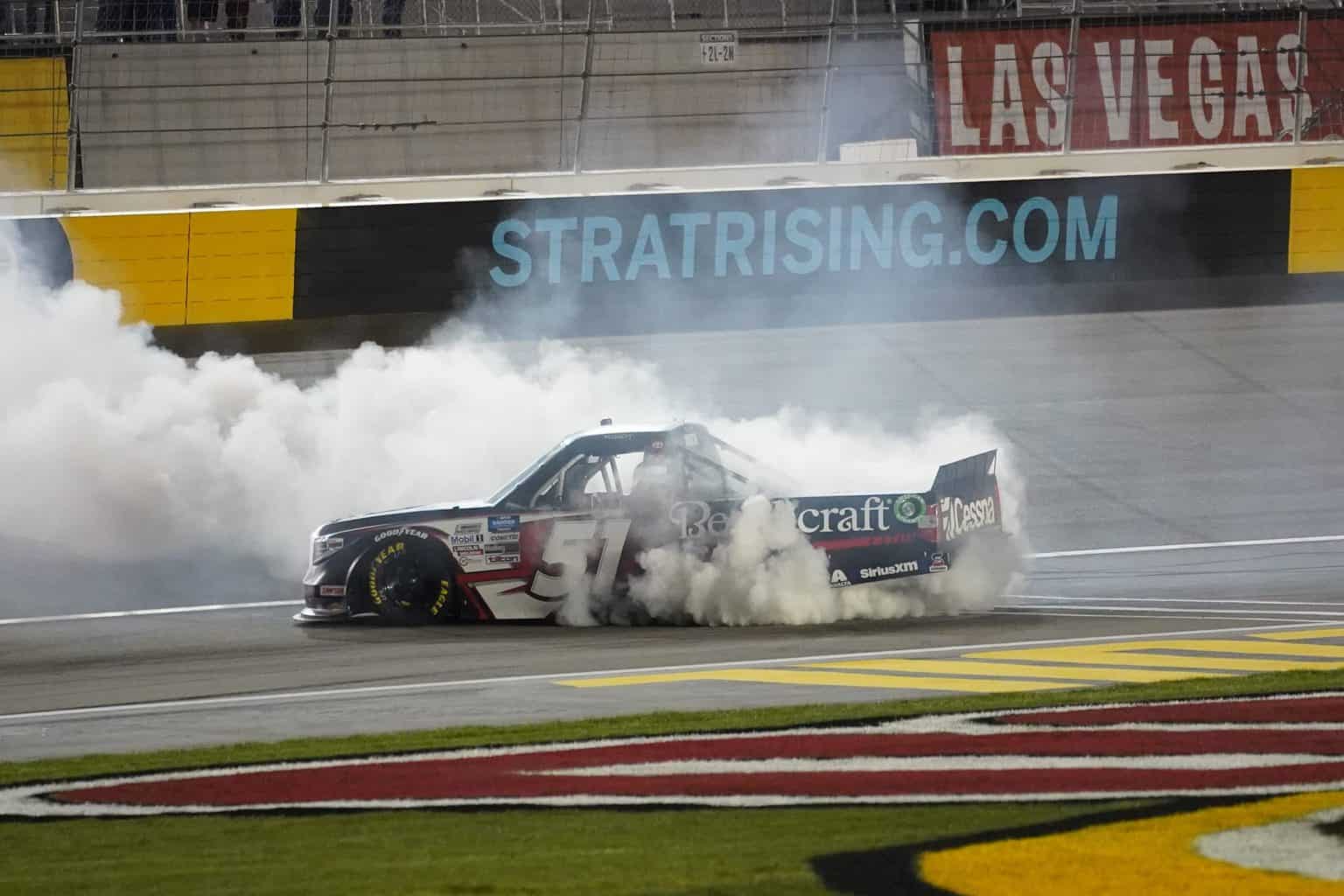 It’s not often that the most intriguing development of a NASCAR tripleheader weekend comes from its least exciting race, but Las Vegas is nothing if not the proper setting for an unexpected swing of good fortune. On Friday night, Kyle Busch did what he (almost literally) always does when he enters a NASCAR Gander RV & Outdoors Truck Series race, putting his Toyota in victory lane. Rowdy’s fans cheered, everyone else complained about how he makes it so boring when he drops down and outclasses the field … in other words, business as usual.

Except this time, Kevin Harvick decided to liven things up, offering up a $50,000 bounty to any Cup regular who can defeat Busch in one of the remaining four Truck Series races he runs in 2020. Gander Outdoors CEO Marcus Lemonis upped the ante to a cool $100K, and after Busch asked what would happen to the dough if he manages to run the gauntlet at Atlanta, Homestead, Texas and Kansas, it turned into a legitimate win-win when it was revealed the money would end up going to The Samantha and Kyle Busch Bundle of Joy Fund.

While cynics took their shots — why wasn’t any driver eligible for the money, for example — it’s hard to view this as anything but a tremendous boon for the Truck Series. The way Busch has been running, there were four races you could almost check off as time better spent doing anything else but watching. Those are suddenly can’t-miss affairs, particularly if there are drivers who can bring sponsor money to other teams to let them field an extra truck. Props to Harvick for spontaneously coming up with the best marketing gimmick possible for races that, let’s face it, could still end up seeing Rowdy running away with more trophies.

TWO: The Best Restarts in the Business?

During Sunday’s Cup Series race, FOX ran a tremendous animated graphic on restarts narrated by Jamie McMurray that explained exactly how drivers decide which lane to choose when they are leading on a restart, and the differences in preferred line at tracks of different configurations. It was the kind of package that was undoubtedly full of insight for newer fans and both informational and entertaining enough to be valuable to the hardcore crowd as well.

The problem is that it’s become far too easy on many tracks to get out to the lead simply by picking the right line, and in an era where clean air is king, that gives far too much of an advantage to whoever is in first place coming out of a caution. Yes, there should be an advantage for someone who controls a restart, but not so much of one that everyone has to hope they spin their tires to have a prayer.

For whatever reason, Las Vegas Motor Speedway doesn’t have that problem:

FOUR-WIDE on the restart!
The green flies again in the #Pennzoil400!

The restarts were wild all day at @LVMotorSpeedway … and the final one was no different.

Look back at how it all unfolded for @joeylogano to get the win. pic.twitter.com/g8pPo7GYYV

It should be noted, too, that despite the potential for disaster during restarts like those, the Cup drivers managed to not cause a huge pileup during any of them this weekend. It’s quite possible that there’s something unique to Vegas that makes this kind of action at the drop of the green flag unique to this particular track, but if there’s any way that other venues can recreate any of this, please take notes.

We almost take it for granted that the top 10 for any Cup Series race is going to come from a pool of about 15 drivers, with an occasional guest appearance from a handful of competitors just outside it. Daytona and Talladega are notable exceptions, where big wrecks take out equally big names, and short tracks can sometimes spring a surprise or two as well.

Alas, someone forgot to tell LVMS about conventional wisdom. Aided by a late race caution (leading to another manic restart), a wide variety of pit strategies and a last-lap accident, the top 10 sure looked like it accidentally got copied and pasted from a random Talladega race. Joey Logano winning, sure, that’s normal. But he was followed by Matt DiBenedetto (tying his best-ever Cup Series finish), Ricky Stenhouse Jr., and Austin Dillon, as unusual an intermediate track two through four as you’re likely to see. Bubba Wallace and Ty Dillon also earned rare top-10 finishes.

The race after the Daytona 500 is supposed to be where the “real” Cup Series season begins and the contenders establish their dominance. That definitely did not happen at the Pennzoil 400, leading to fun things like Stenhouse being solidly entrenched in a playoff position at the moment. Normalcy is bound to rise up and restore itself at some point, but putting it off for at least one more week sure is fun.

Bill Simmons coined the phrase “The Leap,” capital letters included, for athletes who make the next step up to superstardom. Sometimes it’s hard to see it when it’s taking place, but in retrospect, it’s usually pretty clear. NASCAR has anxiously been waiting for one of its younger Cup drivers to make The Leap, and there’s every chance Ryan Blaney might be leaving the ground right now to do it.

Consider that Blaney has had a legitimate shot to win both races held so far in 2020, on very different kinds of tracks. Had the Daytona 500 been either a tenth of a mile shorter or longer, he would have edged out Denny Hamlin instead of the other way around. This weekend at Las Vegas, Blaney was leading late until the incident with less than 10 laps to go bunched the field back up, and he got tangled in the mess on the final lap to finish 11th. His Team Penske Ford has been incredibly fast, and his crew hasn’t been making mistakes.

Blaney also showed incredible mental toughness after a very rough week where he had to come to terms with his role in the frightening Ryan Newman crash. It’s way too soon to anoint a driver a superstar who has never won more than one Cup race in a season, but based on what we’ve seen so far, it wouldn’t be shocking if we’re looking back on the 2020 NASCAR season someday and discussing how it was the year everything clicked into place for YRB.

Chase Briscoe gave one of the more eyebrow-raising quotes of the month when he said that winning “eight or so races” would show that he was ready for a Cup ride, while only winning one or two might mean “I’m probably out the door and not racing anymore.” He later clarified those comments by saying no one had put his future in terms that were quite so numerically objective, but it’s clear he understands both the opportunity he has — someone has to win all those races the Big Three claimed in 2019 — and the pitfalls that a lack of success could bring.

While Noah Gragson truly threw down the gauntlet for the 2020 Xfinity Series season at Daytona, Briscoe sure came up with a heck of a response at Las Vegas. Both he and his No. 98 Ford team came up big when it mattered, putting him in clean air when he needed it most. It was his first victory on an intermediate track, and a sign that despite having no other Fords running the series full time except the one driven by Team Penske’s Austin Cindric, he could be a factor all season long.

Eight victories is a lofty bar to clear indeed, but with the limits on Cup regulars now in place, Christopher Bell proved last year that it’s not impossible. And hey, at least now Briscoe only has to win two more times to stop worrying about being “out the door” for 2021. Insert winky face emoji here.

I was surprised to find the race very entertaining. Whether is was because of tire falloff. bumpy track or what, the race was not limited to one driver running away from everyone.

For sure, it wasn’t just the restarts. Drivers were able to run down the leader, pull off passes, bump and make contact without wrecking each other. A pleasant surprise overall.

So if Kyle doesn’t win any of the 4 remaining races does that mean Harvick and Lemonis will each be shelling out $200,000 (50K per race)? I admit it is highly unlikely but it could happen.

No, it’s just a straight up $50K each from Harvick and Lemonis. If a Cup regular beats Kyle in ANY of his four remaining Truck races, the money goes to that driver (who hopefully would give at least some of it to charity at this point, but they aren’t obligated to do so). If Kyle wins them all, the $100K goes to Kyle and Samantha’s charity.

Bill B
Reply to  Nick Tylwalk

Thanks for the clarification Nick.