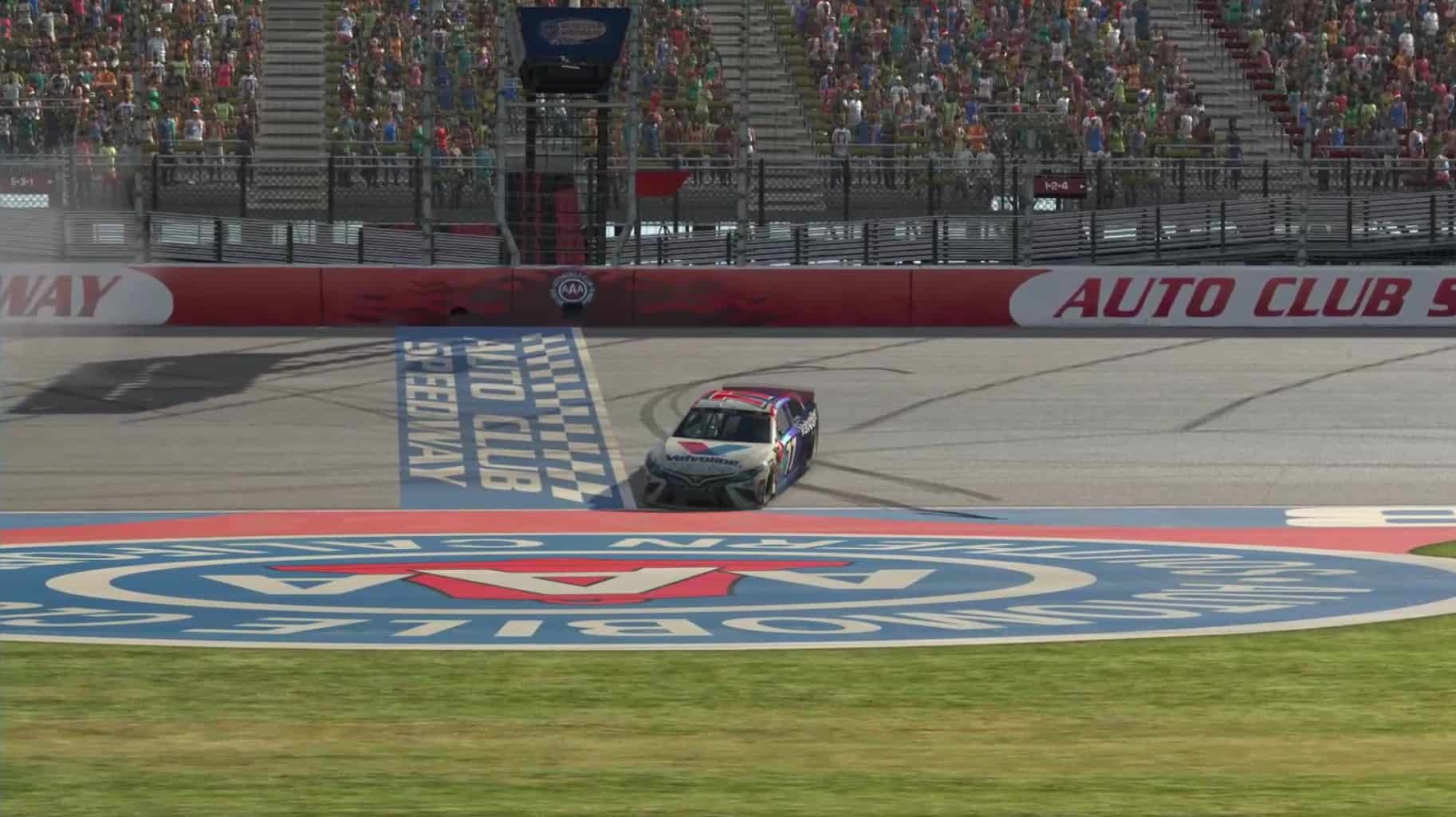 On Tuesday night, amid the blocking and bumping at the virtual Auto Club Speedway, it looked like Logan Clampitt would be the driver to beat — until he got caught up in a wreck, not of his own making. Fortunately for Burton Kligerman eSports, the eNASCAR Coca-Cola iRacing Series has two-car teams, and Ashton Crowder picked up right where Clampitt left off.

Crowder emerged from a back-and-forth duel with Garrett Lowe of Wood Brothers Gaming, making the final pass for the lead at Auto Club with just a handful of laps remaining, then held on to claim the checkered flag in the second event of the 2020 season. The win was Crowder’s second victory in the eNASCAR Coca-Cola iRacing Series, following a triumph at Darlington in 2019. Lowe settled for second, while Bobby Zalenski of Virtual Racing School finished third for the second consecutive race.

Like many drivers on the night, Crowder made some aggressive moves to escape from a pack that was consistently two or more wide, with plenty of cars diving all the way to the apron to pass or avoid blocks. Over the final 10 laps, however, Crowder and Lowe had just enough of a gap on the rest of the field to settle things among themselves, with Zalenski in the picture but never quite close enough to be a factor for the win.

“That was pretty cool, honestly,” Crowder said during his post-race interview. “I told Garrett over our driver’s thing, I think it was like 10 to go, I told him, ‘don’t make a move yet, wait until five to go,’ because I figured we’d get caught by Bobby. Thankfully that didn’t happen.

“Frankly, we weren’t really that good last year. We got a win, but it was mostly off of strategy, and the cars overall were just really lacking. So we spent a lot of time during the winter and just tested our butts off, and it’s obviously showing.”

Like the season-opening Daytona race, the first half of Auto Club’s 100 laps were caution-free despite plenty of spirited racing. The lead changed hands a number of times before most cars came to the pits for green flag pit stops between laps 32 and 38.

The keyword there was ‘most,’ as nine cars led by Ray Alfalla decided to stay on the track until the race’s halfway point, testing the conventional wisdom that the fuel window was around 44 laps. That decision nearly made it two different races being held on the same track at once, but the first caution flag flew on lap 54 when the No. 18 Gibbs Gaming Toyota of Graham Bowlin got spun out and made its way to the grass.

Everyone except the group attempting to make it on one-stop came to the pits, but fuel strategy went out the window quickly after the race restarted when a second yellow came out for a multiple-car incident that collected several strong vehicles, including Clampitt’s No. 99 Toyota. He had to settle for 38th place as a result, finishing the race 31 laps off the pace.

Despite a number of close calls, the race stayed green the rest of the way, and while Jake Nichols (who finished fourth) and Casey Kirwan (seventh) made their presence felt, it was strictly a Crowder-Lowe affair over the closing laps, with the Valvoline car prevailing in the end.

The eNASCAR Coca-Cola iRacing Series now has three weeks off before the virtual engines fire back up at Homestead. The third of 16 regular season races for 2020 will take place on Tuesday, March 17 at 9:00 p.m. ET.