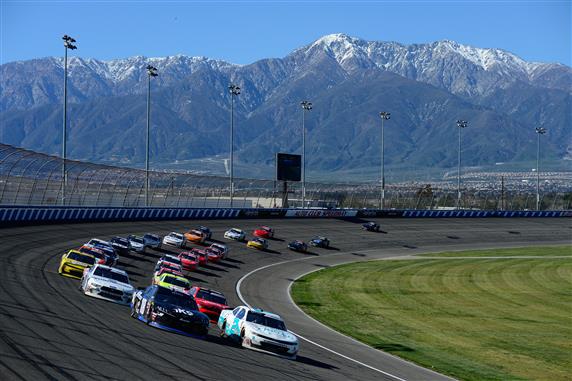 Bryant, 41, was tragically killed in a helicopter crash on Jan. 26 outside of Los Angeles, Calif. His 13-year-old daughter, Gianna, and seven other occupants also died in the accident.

The No. 24 Chevrolet Camaro of William Byron will run a special purple and gold scheme with sponsor Axalta on board. No. 24 was one of Bryant’s jersey numbers while he was with the Los Angeles Lakers.

Ryan Blaney will also run a tribute scheme with sponsor BodyArmor on his No. 12 Ford Mustang. Bryant himself was an investor of BodyArmor before his passing. Blaney met Bryant one time prior to the accident through their BodyArmor connection.

Honored that @drinkBODYARMOR is running a Kobe Bryant tribute scheme this weekend. I was fortunate enough to meet Kobe & this is a great way to honor him, Gianna & all the victims. Stay tuned for merch details and all proceeds will go to https://t.co/WdOVfr5mRk. #MambaMentality pic.twitter.com/UrtylAIsCK

Aside from these tribute paint schemes, other drivers are paying tribute to the late NBA icon in other ways. The No. 96 Toyota Camry Driver Daniel Suarez will wear specially designed gloves and shoes carrying both of the jersey numbers Bryant used in his NBA career, Nos. 8 and 24.

Richard Childress Racing Driver Tyler Reddick will include a memorial No. 8 sticker on the B-post of his No. 8 Chevrolet Camaro.

This weekend in Fontana, RCR and the No. 8 team will honor the life and legacy of one of the all-time greats, Kobe Bryant, with a memorial decal on the b-post. pic.twitter.com/q9JdJQqZBj

Auto Club Speedway will also pay tribute to Bryant by painting his No. 24 in the tri-oval grass area, mentioning Bryant and the crash victims during invocation, having a memorial display for fans to write on and sending donations to the Mamba & Mambacita Sports Foundation.

With Auto Club Speedway being located not too far from Los Angeles, the race weekend will be an uplifting time for NBA and NASCAR fans alike with these tributes at the track.