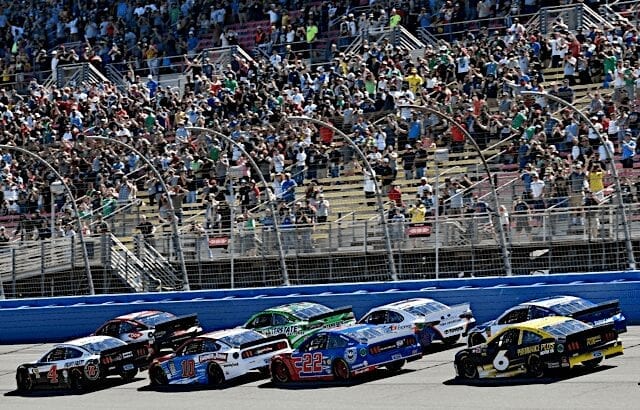 Auto Club Speedway hasn’t exactly gained the reputation of a fan-favorite track during its tenure on the NASCAR Cup Series circuit. And it’s certainly produced some clunkers, with margins of victory sometimes in double-digit seconds. But the finishes have not been all bad. Several races have had a margin of victory under half a second, with the five closest all being under three-tenths of a second. Here are the closest finishes in the track’s run to date.

Harvick restarted in fifth with 10 laps to go, while Johnson started second to Kyle Busch, who led over half the race. Johnson had a great restart on the inside, but Busch was able to pull away thanks to the momentum of the outside lane. Harvick restarted fifth but made a furious run toward the front. Johnson made a vintage-Johnson move to pass Busch, but the race for the lead allowed Harvick, who had moved to third, to close. In turn 3, coming to the checkers, Harvick gave Johnson just enough of a rub to loosen him up and from there, took the Richard Childress Racing No. 29 to victory lane.

A late restart set up this green-white-checkered finish, with Busch restarting fifth on four new tires among a mix of tire strategies. The four-tire move paid off on the aging asphalt, and Busch was ready to pounce on brother Kurt and Tony Stewart. But it was rookie Larson who made it exciting, using every inch of racetrack to try and get around Busch. He didn’t quite make it happen, but he made for a great finish nonetheless.

Biffle had a solid lead with only a few laps to go, but Johnson closed like a demon in the final five laps, working his way from fifth to a battle for second with Kurt Busch. Biffle’s best hope was that his then-teammate Busch would hold Johnson up enough so the No. 48, on fresher tires, couldn’t make a run in the final corners. Busch obliged, and Johnson, now the winningest driver ever at Auto Club Speedway, was denied another feather on his cap.

A restart with 10 laps to go saw Sadler having to protect the lead from Kahne as well as a charging Mark Martin, Brian Vickers and Jamie McMurray. Sadler got a strong restart, allowing him to build a small gap over Kahne as Vickers and McMurray battled it out for fourth. Martin’s car was set up for a long run, and he wouldn’t get one to the finish.The battle within the top 10 was a fierce one, giving fans quite a show. Carl Edwards was able to join the show in the battle for fourth along with Ryan Newman, with Dale Jarrett and Joe Nemechek in the fray was well. Kahne was able to close the gap by over half a second in the final two laps but finished just a couple of car lengths behind Sadler as the playoffs loomed.

Wallace had his hands full of the lapped car of Todd Bodine as the laps wound down, but the 1989 Cup champion had a commanding lead and the fastest car on track. With 15 to go, Wallace had a lead of over a second. But Gordon was able to pick up a little bit of draft from Bodine, and that allowed him to close on Wallace. With five to go, Gordon closed to within a couple of car lengths as both drivers had to fight their cars due to faded handling. Wallace had forced Gordon to use up his car, though, and was able to hold the lead. Gordon dogged Wallace, closing again on the final lap, but Wallace used his advantage to keep Gordon behind him to the checkers, leading 95 laps on the day. The race is probably best remembered for Wallace’s victory lap, when he carried a Dale Earnhardt flag to honor his friend and rival on what would have been Earnhardt’s 50th birthday.