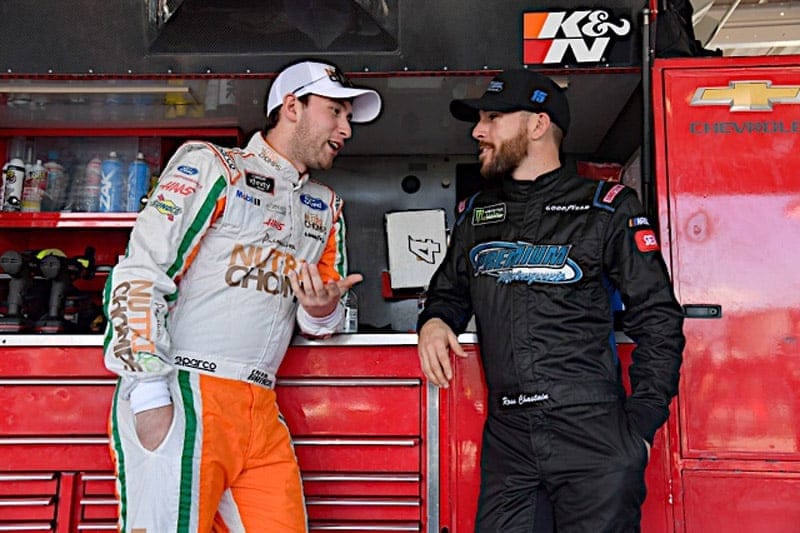 Roush Fenway Racing found itself in a very difficult decision following the delayed Daytona 500. Its full-time driver Ryan Newman was injured and in only a few days they had to trek out west to continue the season at Las Vegas Motor Speedway. In a short period of time the team had to make a decision on who to hire to drive the No. 6 car while trying to stay competitive. They decided to go with Ross Chastain, a driver who races full-time in the NASCAR Xfinity Series with a Chevrolet team. It seemed like Chastain was the only driver they talked to.

Chase Briscoe, a Ford driver, mentioned in victory lane for the NASCAR Xfinity race this weekend, that he wasn’t even approached by Roush Fenway about substituting for Newman. Briscoe is one of only a few Ford options the team could have gone to, but the decided to go against the grain and hire Chastain.

That brings about the question: Did Roush Fenway Racing make the right decision by hiring Chastain to substitute for Newman or should they have went with Briscoe? Our writers Clayton Caldwell and Adam Cheek discuss.

Should Have Kept it In House

There is no doubt Roush Fenway Racing was thrown into a tough situation by losing its driver on a short week before a trip to the west coast.

Ross Chastain’s name was kicked almost immediately as a replacement for Newman and it made a lot of sense initially. The general consensus was that Newman was going to be out for a significant period of time, maybe even the whole year. There is no doubt that the talent Chastain possess means that the No. 6 car will be competitive in Newman’s absence.

However, there is a big issue with Chastain. He is running the full season in the NASCAR Xfinity Series for Kaulig Racing, a Chevrolet team. Chastain also has an agreement with Chip Ganassi Racing and even ran this year’s Daytona 500 in a Ganassi car.

Now that RFR announced that Newman’s injuries may not be as serious as originally thought, Chastain may be in the car for a shorter amount of time. The team announced this week that the goal remains the same for Newman – to win a championship in 2020. That leads you to believe that Newman will be back sooner rather than later.

Add that with the fact that Kyle Larson is a pending free agent at the end of the season and that Chastain is a prime candidate to replace him in the No. 42 if he leaves, it makes you wonder what exactly RFR is trying to do.

Were they trying to give Chastain a head start on his Cup career? That will only benefit a Chevrolet team in the future. If he was going to run for the championship or if he had a future with the organization in Cup, that’s one thing. But the fact that he is at Roush for a handful of races and then will go back to the Chevrolet camp really makes you scratch your head.

This is why they should have hired Chase Briscoe to fill in for Newman. Briscoe drives a Ford in the Xfinity Series for Stewart-Haas Racing, and while his future may not be at Roush Fenway Racing, helping out a Ford driver would be a bigger benefit for Roush Fenway down the road, and it would not assist in grooming a Chevrolet driver.

Jack Roush has always seemed to have Ford’s best interest in mind. He’s been with the manufacturer since he started his team in 1988 and is a key figure in the company’s engine department. Roush-Yates Engines provide the power for nearly all the Ford teams in Cup and Xfinity. Another successful driver in a Ford is a benefit to both Roush-Yates Engines and Roush Fenway Racing.

Remember when Matt Kenseth went to Toyota and Jack Roush stated that he “went to the dark side?” And yet the organization goes out and hires a Chevrolet driver to substitute for Newman just a few years later. Chevrolet is Ford’s biggest rival.

Could Briscoe have driven the No. 6 Ford to its fullest capacity while Newman was out? I think his victory in the NASCAR Xfinity race at Las Vegas proves that. By the way, who did he beat in that race? That’s right – Ross Chastain.

In the end, I’m struggling to figure out why Chastain was given the nod over Briscoe. Roush Fenway gave another manufacturer’s driver a boost and gave him a look into how they do things. They could have avoided this and hired Briscoe, keeping it in the family and improving Ford’s future. – Clayton Caldwell

Ross Chastain has been a longtime journeyman of NASCAR’s three premier series. He nearly won the NASCAR Gander RV & Outdoors Truck Series title in 2019 while running 77 total races across those three divisions that year and has five wins to his name in the Xfinity and Truck Series.

In Cup Series competition, the “Watermelon Man” has driven for numerous teams, most prominently Premium Motorsports, and began 2020 in the No. 77 car at Daytona, a joint effort between Chip Ganassi Racing and Spire Motorsports. Chastain worked his way to the head of the pack several times, but was caught up in a crash late – the 27-year-old dove to the bottom with a blazing run, but a late block by Ryan Preece sent both cars and several others crashing through the first two turns.

Meanwhile, at the end of the same race, Ryan Newman’s horrific, violent crash at Daytona left Roush Fenway Racing scrambling for a substitute driver until Newman recovered, and there were a few viable options.

While Chase Briscoe may be the more straightforward pick, what with driving for Ford in Xfinity already and being a longtime pilot for the manufacturer, as well as Chastain primarily driving for Chevrolet in whichever series he runs, I believe RFR made the right choice in picking their substitute.

Part of me believes it was the right choice due to a comment Briscoe made in at Daytona – he said he was determined to compete in the Xfinity Series in 2020, believing that eight wins would move him to Cup Series competition while only one or two victories would cost him his ride with Stewart-Haas Racing. Briscoe focusing on Xfinity races every week is the best-case scenario for the Indiana native.

Additionally, the experience factor makes a huge difference – Chastain is used to running Cup Series cars and he’s comfortable undertaking double or triple duty every weekend. He’s run all three races in both weekends so far this season. Putting one of the best available drivers used to Cup competition in the No. 6 car was also the best-case scenario for both Chastain and Roush Fenway.

Briscoe has never driven a Cup Series car. That experience would certainly be beneficial, but suddenly being thrown into a car as a substitute – while already running full-time for a championship in Xfinity – would be a massive distraction for him. We saw drivers like Cole Custer and Tyler Reddick drive a few Cup races prior to their promotion to the premier series, but those were scheduled out ahead of time and gave the drivers time to prepare.

Finally, this is beneficial for Chastain. He’s driving Kaulig Racing’s Xfinity No. 10 Chevrolet this season, the first time the team has fielded a second full-time entry, and improving that team is his primary focus. Chastain has never driven a very competitive Cup Series car, so filling in for Newman gives him a chance to do so and see what he can do in solid equipment.

Chastain was definitely the right call to replace Ryan Newman while “Rocketman” recovers, and I wouldn’t be entirely surprised if we see some great runs during the Melon Man’s time in the No. 6. It wouldn’t be too much of a shock, either, if he visits the Cup Series’ victory lane in the car Newman’s already almost won a few races in. – Adam Cheek

Following your “logic,” what about Austin Cindric? Isn’t he a Ford Driver? Hello……………….

The correct answer is “David Ragan”. Could’ve easily pulled a Jeff Gordon-type move and come out of retirement for a few races as a feel-good story & favor toward Ford. Cup-level driver all the way.

One element overlooked….sponsors. Did they have a preference. Also Briscoe is in the middle of a renaissance year of sorts. He finished last year with his stock rising. He started the year with a win. He’s wise to not dilute given the absence of immediate talent in the Ford pipeline.
As for Cindric, I think he has a good idea of where he will end up.

You take Sally, I’ll take Sue, ain’t no difference between the two.

Matty
Reply to  Bill B

BillB – Chastain is a fully-grown man. Briscoe is just a boy. Big difference as illustrated in the article

Don’t you have to get approval by driving a Cup car before you can race one? If so Briscoe does not have the approval to race a Cup car. Maybe it’s only Super Speedway?? hmmm

All Truck and xfinity drivers are cleared at .75 and under tracks. Larger tracks are at NASCAR’s discretion. Certainly Briscoe is a quality driver whom NASCAR would immediately certify

Dave Ragan was the correct answer. He is working for Ford this year and has a long relationship with Ford and Roush.

Tom B
Reply to  Jeff

Correct, David Ragan. Maybe he was asked and turned it down. Did anyone care to ask? Either way not much investigative journalism done anymore. They just seem to quote each other in all news.

Dav_Daddy
Reply to  Tom B

Amen, I get sick of the incestuous circle all media falls prey to in this day and age.

I understand the need for volume and if you’re not publishing your starving. But I don’t think reaching out for comment and indicating that the story will be updated if a reply is forthcoming is too much to ask.

I wouldn’t be surprised if Roush-Fenway announces that they’ve signed Chastain to drive a third Cup car for 2021. That would explain everything, wouldn’t it?

Roush is a pragmatist, not an ideologue. He’s done plenty of contract work for General Motors.

Did everyone forget that Roush let Chris Buescher drive Chevrolets while under contract to Roush-Fenway? Again, Jack Roush doesn’t let anything get in the way of his loyalty to Jack Roush.